The Labour leader made the pledge as he visited a controversial site in Lancashire. 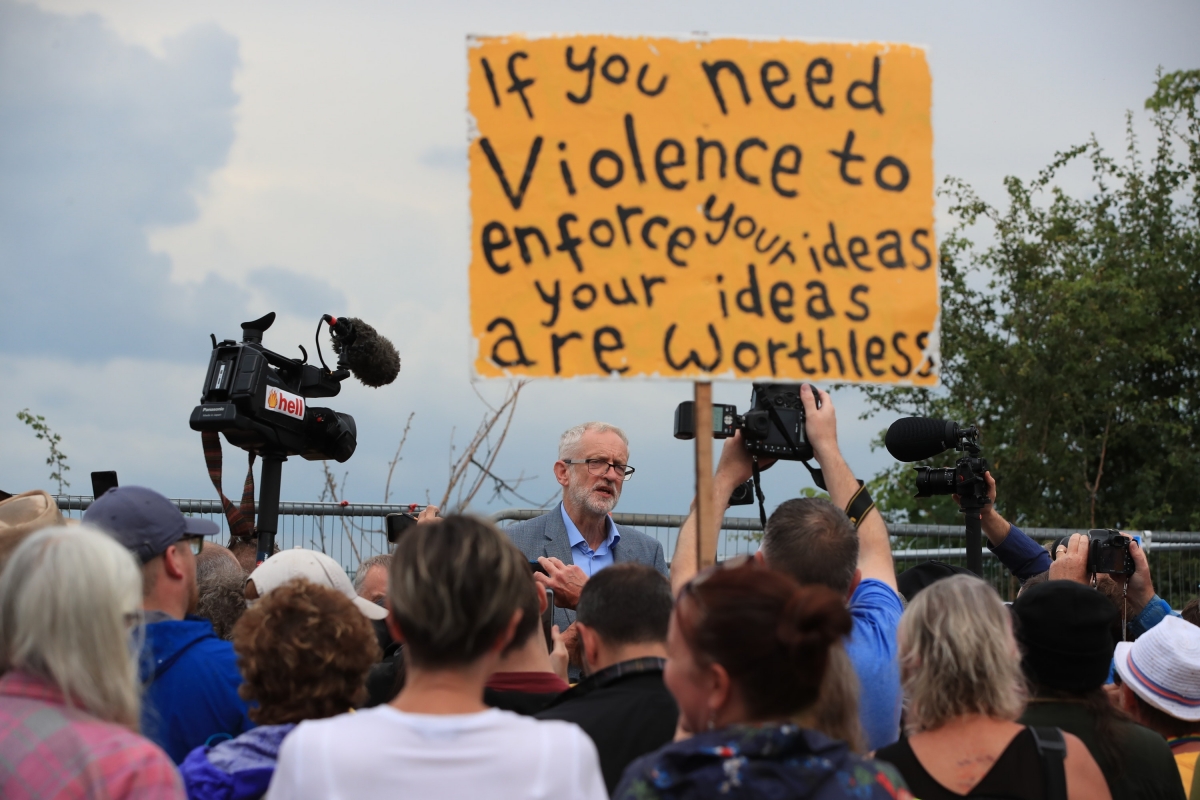 Jeremy Corbyn has snubbed the boss of fracking firm Cuadrilla, meeting protesters instead at the gates of a shale gas exploration site and promising them his party would ban the practice.

Mr Corbyn spoke to a hundred or so people demonstrating at the Preston New Road site near Blackpool as police officers stood guard.

The site is the UK’s only shale exploration operation and is controversial in Lancashire after small earth tremors were blamed on the process.

Mr Corbyn said fracking, a method of shale gas extraction through hydraulic fracturing underground, would have a damaging effect on the environment.

But the boss of Cuadrilla, Francis Egan, said Labour’s policies would leave the UK dependent on imported gas and issued an open invitation for him to visit.

Asked if he had any plans to meet the firm’s representatives, Mr Corbyn said: “As of this moment no.

“I’m here to announce our support for ending fracking, but I’m happy to talk to them because I do believe what they are doing is dangerous to our environment.”

After speaking to demonstrators in a hut where they organise round the clock monitoring of the fracking activities, Mr Corbyn stepped onto a bench to give a speech to protesters.

He said: “I want to see a green industrial revolution in Britain.

“I want to see sustainability. We cannot go on with this level of CO2 emissions and global warming, otherwise we are all damaged if not doomed.

“A green industrial revolution will create around 400,000 jobs, high-skilled, good quality, well paid jobs, all around the country.

“That is a future for our children.

“We have a short window, as a people, to reduce CO2 emissions, to prevent global warming beyond 1.5C, in order to protect the planet.

“I want to say well done everyone in Lancashire that opposed fracking here, as in Derbyshire and other places, in Sussex, and the way in which you have made sure the issue is kept alive.”

Mr Corbyn said: “Lancashire County Council did its best and then the whole legal process and Sajid Javid intervened.

“Well a Labour government would intervene again and we would ban fracking all across the UK.”

But Mr Egan said gas demand would continue and the country faced a choice as to where the fuel came from.

“I am very disappointed that Labour appear to favour continued and increasing levels of gas imports by ship from the Middle East, Africa or the United States or by pipeline from Russia rather than developing a well-regulated, job-creating UK shale gas industry,” he said.

“The Labour Party has made it very clear that it opposes UK shale as a supply source for our required natural gas, but appears to have no policy or plan for where the UK’s gas supply should instead come from.

“We can only assume that it favours continued and increasing long distance gas imports.”

A Department for Business, Energy and Industrial Strategy spokeswoman said: “Independent climate experts have recognised that natural gas has a role to play as we meet our 2050 net-zero emissions target – now firmly set in law.

“Exploring the potential of a new domestic energy source is not only compatible with these world-leading climate goals, it could also deliver substantial economic benefits, through the creation of well-paid, high-quality jobs.”