The controversial factory ships can be hundreds of feet long and ‘vacuum’ up huge quantities of fish every day. 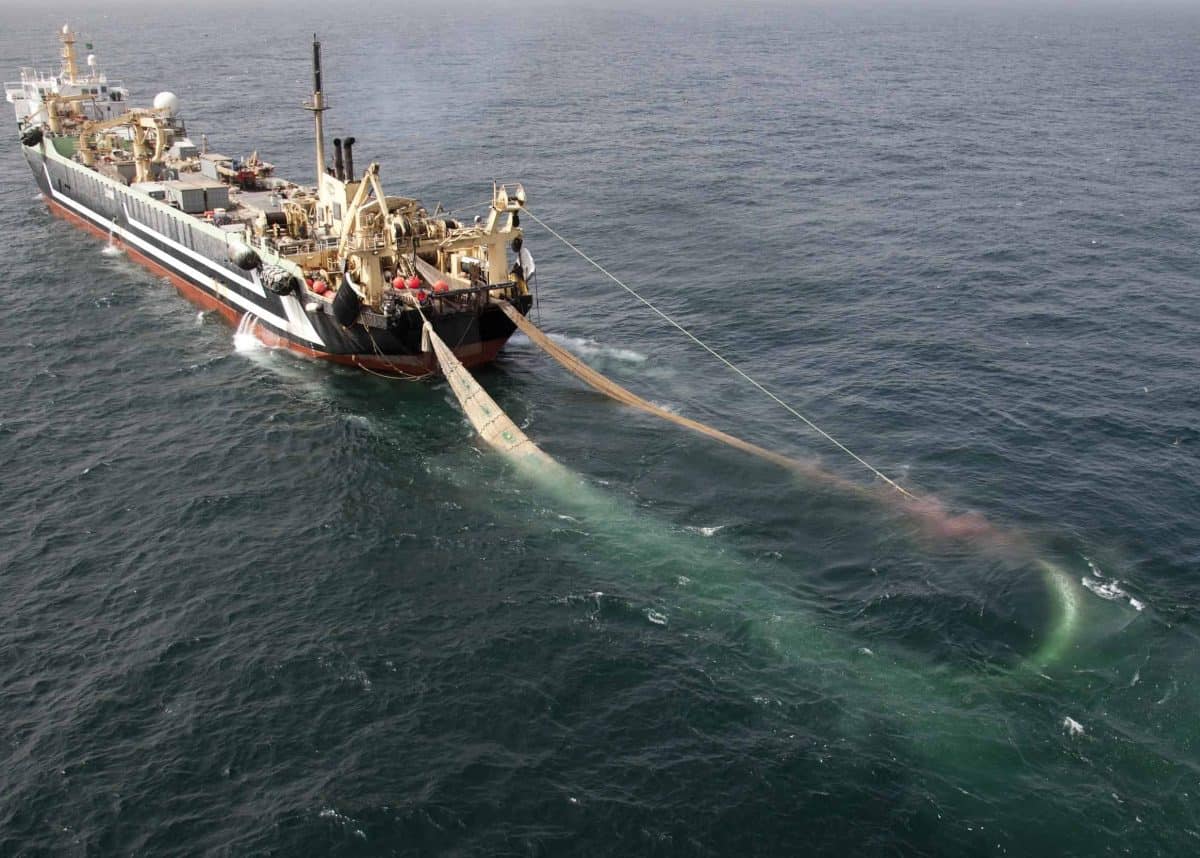 Undated handout photo issued by Greenpeace of the world's second largest factory fishing trawler, the Lithuanian FV Margiris, which has been spotted off the south coast of England, raising environmental concerns. Credit;PA

Brexit is a “perfect opportunity” to take back control of British waters and oust “monster” supertrawlers for good, campaigners say.

The controversial factory ships can be hundreds of feet long and “vacuum” up huge quantities of fish every day.

Environmentalists fear their presence in the UK seas for weeks at a time correlates with spikes in numbers of dolphins washing up dead on British beaches.

Last year, there was outcry over a visit to the English Channel by the Margiris, a 465ft boat once considered the second largest in the world.

But with fishing rights to UK waters up for review in negotiations with the EU, campaigners are calling for a ban on supertrawlers, or at least that they are fitted with CCTV cameras or have independent observers on board.

The Government said that Brexit will allow the UK to decide who fishes in its waters and on what terms.

Greenpeace has called on ministers to take a “long, hard look” at whether allowing supertrawlers to operate in UK waters is compatible with sustainable management.

John Hourston, from the Blue Planet Society, told the PA news agency: “It’s just been a long stream of dolphin deaths, I have never seen anything quite like it.

“We have had several storms but dolphins do not die because of weather, they are great swimmers.”

Mr Hourston believes the evidence points to the supertrawlers, but says scientific study is needed to prove the link.

He added: “We have just got mass dolphin die-offs and mass fishing fleets and the two correlate but we need more evidence.”

Calls for a ban on supertrawlers surfaced last year when the Lithuanian-registered Margiris – once banned from Australian waters – spent time off the south coast of England.

The controversial vessel, which has a deadweight of 6,200 tonnes, is owned by Dutch company Parlevliet van der Plas, which says it has an “excellent reputation for sustainable fishing”.

This was not the first time the boat had drawn the ire of environmental campaigners.

Greenpeace protesters confronted the Margiris – previously known as Abel Tasman – in West Africa in March 2012 and in the Netherlands and Australia in 2013.

A spokesman said at the time: “We share the view of the small-scale fishers whose livelihoods would be destroyed by monster boats like the Abel Tasman: no monster boats here, not anywhere.”

In response to the Margiris’ presence in the English Channel in late 2019, a petition was launched to ban supertrawlers from UK waters.

It amassed more than 25,500 signatures before the general election was called and all Parliament petitions were archived.

But following Brexit, campaigners believe it is the perfect time for the Government to take up their quest to ban the giant vessels from UK seas.

Mr Hourston said post-Brexit Britain has a “perfect opportunity to set the gold standard for environmental stewardship of the sea”.

“We should not be allowing supertrawlers in British waters.”

At a minimum, Mr Hourston called for CCTV cameras to be installed on trawlers or for independent observers to be present on board to monitor which fish are being caught.

A spokesman for the Department for Environment, Food and Rural Affairs said: “As an independent coastal state, we will have the right to decide who fishes in our waters and on what terms.

“This means we can design our own domestic fishing policy, one that supports our coastal communities and lets the UK lead the way on sustainable fishing.”

Under the Common Fisheries Policy (CFP) EU registered vessels are legally entitled to fish in UK waters, subject to licence conditions, quota allocation and relevant fishing restrictions. The Defra spokesman added: “The Marine Management Organisation continues to inspect large trawlers in English waters, but no infringements have been found.”

The department said it monitored the Margiris closely when it fished in UK waters and inspected the ship but no infringements were identified nor any evidence that it fished in restricted areas.

Clive Fennell, who lives in the seaside town of Littlehampton in West Sussex and runs the Littlehampton Environment and Places Facebook page, set up a new petition calling on the Government to ban the supertrawlers.

He told PA that the boats act like a “vacuum cleaner”, and added: “We need a sustainable way of fishing.

“Ideally I think they would ban them but if it is part of a deal then they should have Defra or Royal Navy or whoever on them monitoring them 24 hours a day to make sure they do adhere to the rules.”

The petition was launched on Thursday and will need 100,000 signatures to be sure to be considered for debate in Parliament.

It can be found at petition.parliament.uk/petitions/300164

Chris Thorne, Greenpeace oceans campaigner, said: “Our Government likes to boast about its credentials as a global oceans champion, but what about protecting our seas here at home?

“Ministers should take a long, hard look at whether allowing supertrawlers to operate in UK waters is compatible with sustainable management of our waters, as well as investigating the impact of the UK’s industrial distant water fleet in other countries’ waters.”

The website of fishing company Parlevliet van der Plas says it has an “excellent reputation for sustainable fishing”.

It adds: “Our catch quotas are dictated by government and EU regulations, and are based on scientific advice.

“We fish without causing damage to the seabed, and without disturbing the ecological system.”