The 48 letters from Conservative MPs needed to trigger avote of no confidence in Theresa May’s leadership have been submitted to the1922 Committee, a single -sourced Reuters Brexit editor is reporting. Their BrexitCentral editor cites a source who he insists is always reliable. “Unconfirmed and from a single (always previously reliable) source – but hearing […] 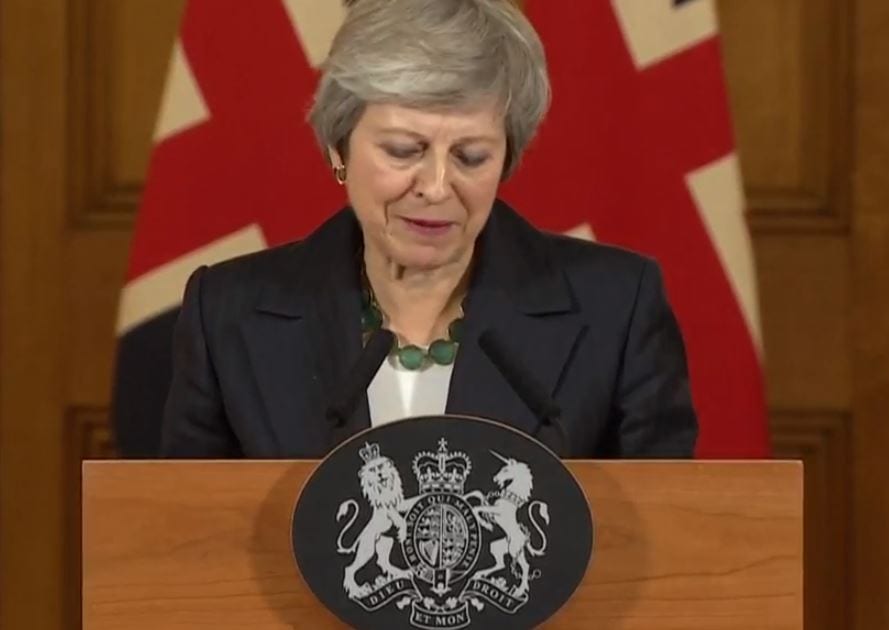 The 48 letters from Conservative MPs needed to trigger avote of no confidence in Theresa May’s leadership have been submitted to the1922 Committee, a single -sourced Reuters Brexit editor is reporting.

Their BrexitCentral editor cites a source who he insists is always reliable.

“Unconfirmed and from a single (always previously reliable) source – but hearing that the 48 letters are in and Downing Street are preparing for a no confidence motion in Theresa May as Conservative leader…” tweeted Reuters’ Jonathan Isaby who is well connected to Brexiters in the Conservative Party.

The Huffpost’s Paul Waugh just tweeted: “All Govt whips havejust been told to cancel Friday constituency engagements and convene inParliament today, one source tells me. Make of that what you will?”

Sky News say sources are confirming this too.

“All government whips have been told to cancel any engagements today and return to London as a source close to the whip’s office says a no confidence vote in the Prime Minister is now “likely” Sky news is reporting.

“Have this confirmed by a source close to the whips office. They are heading back to SW1. Source tells me it must now be likely that confidence vote happening. “Got to be close if not there already” – says Beth RIgby Sky News’ Deputy Political Editor.

Hours after Theresa May addressed the nation in a press conference to insist that everything was on track, reports are emerging that enough letters have been submitted to the Conservative backbenchers’ 1922 committee to trigger a leadership contest in the party.

“I am not in denial” the Prime Minister insisted last night when questioned about how  she would get her Brexit deal through Parliament.

But the DUP had withdrawn their 10 MPs’ support that she hasbeen relying on for a majority, making it extremely unlikely that she can gether deal through the Commons in the face of objections from Labour and her ownMPs determined to vote against her deal.

“For what it’s worth, I can’t find a Tory MP who thinks the 48 no-confidence letters aren’t already with the 1922’s Brady. And surprising people are telling me they will vote against her, if (when?) it comes to it” Robert Peston tweeted yesterday.

Earlier Jacob Rees-Mogg publicly handed in a letter of no-confidence in Theresa May’s leadership to Sir Graham Brady, chairman of the1922 Committee and called on other MPs too.

When asked who would make a good leader for the party, the hardline Brexiter only mentioned fellow Brexit-supporting Tories Boris Johnson,Michael Gove, Dominic Raab, Esther McVey and Penny Mordant.

The prominent Brexiter said Theresa May’s Brexit deal “has turned out to be worse than anticipated and fails to meet the promises given to the nation by the Prime Minister”.

Which MPs have submitted letters to the 1922 Committee?

The 18 Conservative MPs who have admitted publicly that they have submitted letters calling for a vote of no confidence in the PrimeMinister Theresa May are:

At the same time resignations started hours after Theresa May presented the Brexit agreement to her cabinet.

Michael Gove refuses to say if he will resign.

And Tories were briefing a vote of no confidence was just a matter of time for their leader.

“She’s lost the trust of the parliamentary party. It’s not just Brexiteers. The point is that for so many months she has obfuscated all the details of what, in secret, she has been negotiating with Olly Robbins and others with the European Union.”