A foreign terrapin branded with right-wing ‘EDL’ graffiti has been spotted in a public park. Nick Leonard was walking with his one-year-old daughter when he spotted the defaced animal in a grassy area near a pond. The small reptile’s shell was daubed in white paint with the slogan “EDL” alongside a crudely-drawn cross of St […] 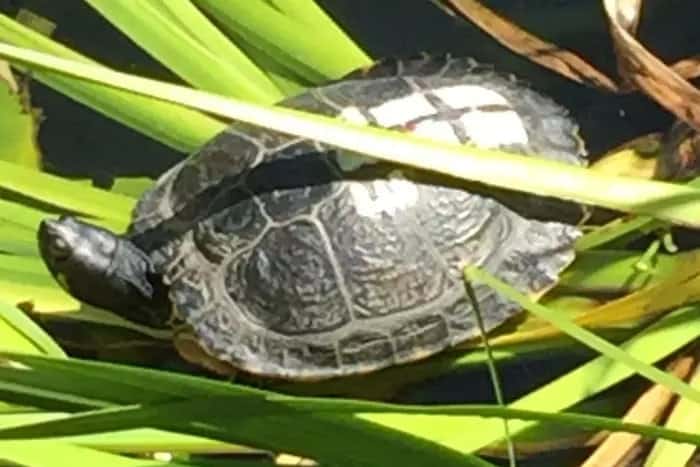 A foreign terrapin branded with right-wing ‘EDL’ graffiti has been spotted in a public park.

Nick Leonard was walking with his one-year-old daughter when he spotted the defaced animal in a grassy area near a pond.

The small reptile’s shell was daubed in white paint with the slogan “EDL” alongside a crudely-drawn cross of St George – seemingly a reference to the far-right nationalist group, the English Defence League.

In a bizarre twist the species is considered an invasive species – animals from outside Britain which can potentially cause serious damage to the native environment and are illegal to release into the wild.

Nick originally identified the animal as a tortoise but after further inquiries by Hastings Borough Council, which is responsible for maintaining the park, it appears the animal is actually a red-eared terrapin.

The chef saw the animal in St Leonards, East Sussex, in a pond in gardens on August 15.

A father-of-one said the animal’s appears to be daubed with a St George’s Cross and the letters EDL.

He said: “I’ve been taking my daughter there around once a week since she was born and it’s not something you expect to see.

“I don’t know if someone has let it loose there or if it’s got out of someone’s home but if its supposed to be a joke then it’s not a funny one.

“If it’s children, they need to be told this isn’t acceptable and if it’s an adult, well then they should definitely know better. It says a lot about someone, that they would do that to an animal.

“I am shocked and disgusted and frankly think the person behind it should be found.

“People might think it is funny, but it;s not really. It’s probably not a kid that has done this, it’s probably an adult who has no regard for the welfare of the animal.”

Had it been a tortoise the animal could have been taken into the care of the RSPCA but due to rules designed to prevent the spread of invasive species the council is not able to remove it from the park.

Due to these rules the council’s policy is to leave the animal in the pond until the end of its natural lifespan – which can stretch for up to 30 years in normal circumstances.