Theresa May’s “coalition of chaos” looked in real trouble today on the eve of the Queen’s speech with the support of the Democratic Unionist Party looking in doubt today – ten days after she announced a vote support deal had been agreed. The day after Brexit talks began, Theresa May faces any chance of a Westminster majority […] 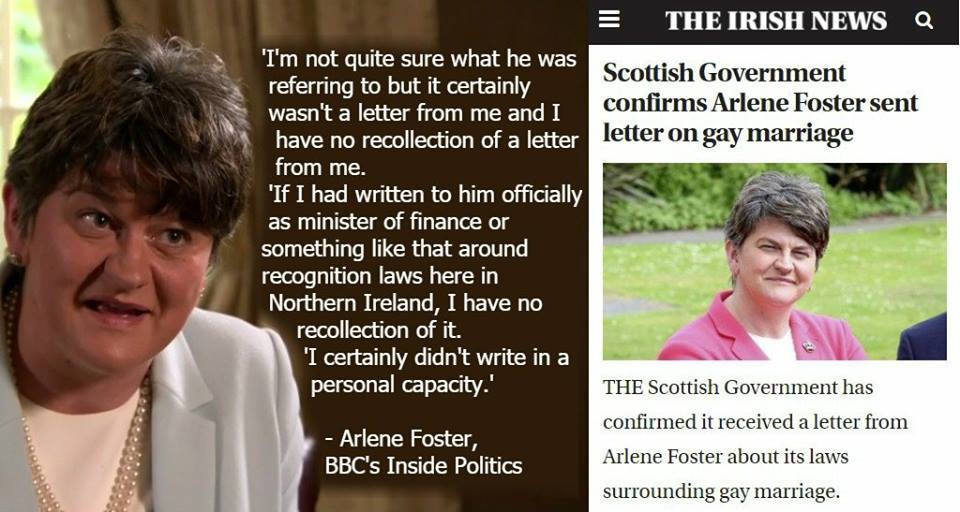 Theresa May’s “coalition of chaos” looked in real trouble today on the eve of the Queen’s speech with the support of the Democratic Unionist Party looking in doubt today – ten days after she announced a vote support deal had been agreed.

The day after Brexit talks began, Theresa May faces any chance of a Westminster majority crumbling as DUP sources told Sky News that talks “haven’t proceeded in a way that DUP would have expected.”

The Queen will speak in the House of Lords detailing a much curtailed Tory legislative programme that may now lack a majority to pass it at approximately 11.30am on Wednesday, leaving her majesty just enough time to nip to Royal Ascot before the first race at 2.30pm – so she really won’t be amused by any further complications.

In another major embarrassment for the controversial Northern Ireland Party linked to a paramilitary past and constant opposition of women’s and gay rights, the Scottish government today busted the DUP’s Arlene Foster for lying that she did not send them a letter requesting they do not marry gay couples from Northern Ireland by rather predictably – revealing that letter.

The claims emerged when Scottish minister Marco Biagi tweeted on June 10 revealing that the DUP leader had written to him asking to curtail same-sex marriage access for Northern Ireland couples.

Biagi made the revelations as the Northern Ireland party with controversial homophobic views against same sex marriage were liaising with Theresa May to help her cling onto power with a Conservative minority in Westminster.

When I was a minister DUP's Arlene Foster wrote to me asking us to curtail access of Northern Irish citizens to Scottish same-sex marriages.

Specifically this was couples with prior Northern Irish civil partnerships, who couldn't switch for marriages in NI (or England and Wales).

Marco Biagi was Minister for Local Government and Community Empowerment from November 2014 to May 2016 and he explained how Foster had written to him in September 2015. “I said no”, he tweeted.

The DUP leader denied sending a letter, telling BBC Radio Ulster’s Inside Politics programme last week: “I’m not quite sure what he was referring to but it certainly wasn’t a letter from me and I have no recollection of a letter from me.”
So the Scottish government refreshed her memory by publishing the letter signed by Arlene Foster today. 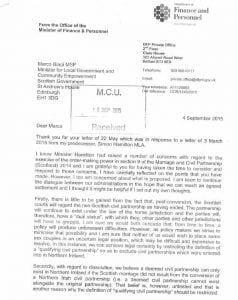 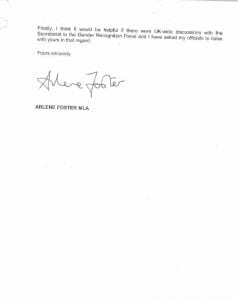 In other complications for what Sinn Fein leader Gerry Adams has called the “coalition of chaos” – borrowing Theresa May’s election soundbite – his party today made clear that they would not countenance Foster returning to Stormont as Northern Ireland’s First Minister while a public inquiry into her botched drastically over-budget green energy scheme is ongoing. The inquiry into the scandalous £490m overspend she has been blamed for could well last into 2018.
The debacle has left Northern Ireland without a powersharing Executive since March, and if one can’t be formed by June 29 Northern Ireland may face direct rule by Westminster. Sinn Fein question Westminster’s neutrality as Theresa May will rely on a coalition or technically a vote supply arrangement with the DUP to get her Queen’s Speech programme of legislation through parliament.
@BenGelblum
Who are the DUP?
DUP threat to most diverse parliament ever
Oh dear Theresa! Labour takes three point lead over the Conservatives, says new poll