DUP leader Arlene Foster has said it is “very important” Britain leaves the European Union by October 31, but she refused to back either candidate to become the next prime minister. She said the Government must keep a no-deal Brexit on the table and claimed repeated extensions are fuelling public discontent. Tory leadership favourite Boris […] 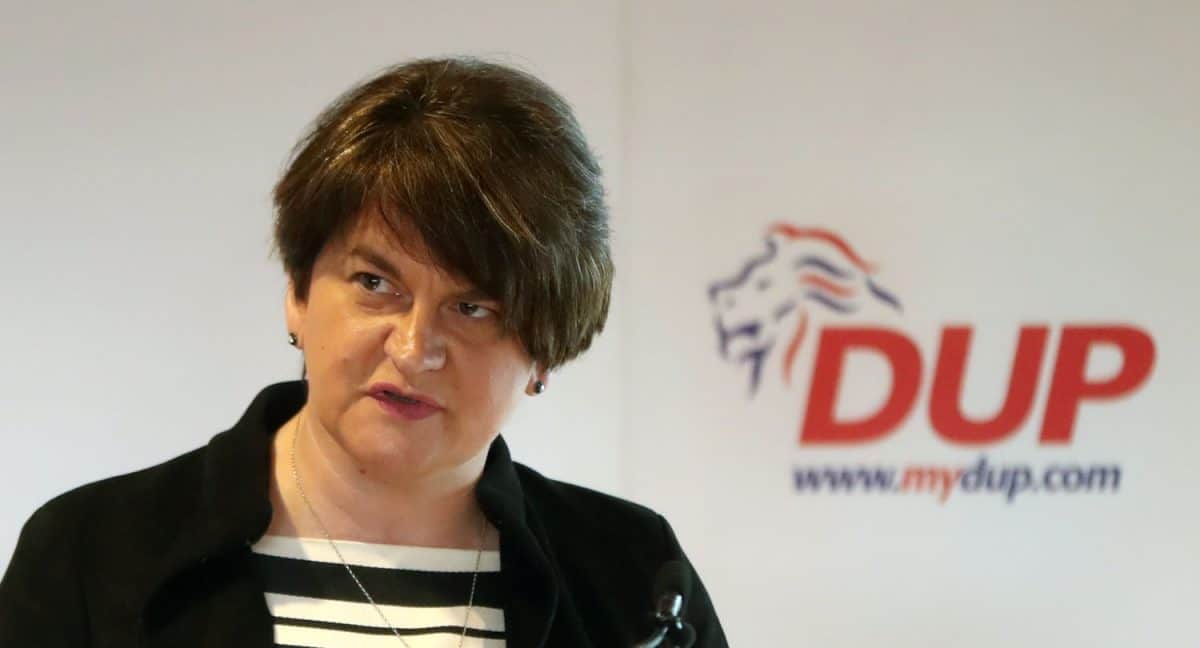 DUP leader Arlene Foster has said it is “very important” Britain leaves the European Union by October 31, but she refused to back either candidate to become the next prime minister.

She said the Government must keep a no-deal Brexit on the table and claimed repeated extensions are fuelling public discontent.

Tory leadership favourite Boris Johnson has pledged to leave by the Halloween deadline, but his rival for Number 10 Jeremy Hunt has left the option of an extension open.

“Of course, we should have left by now and I think a lot of the discontent within the United Kingdom is caused by the fact that we haven’t left, and we’ve seen that in the European election results.”

She refused to back either Mr Johnson or Mr Hunt as next Tory leader at the event on Wednesday in central London, but said she has a “good relationship” with both.

“That is not a matter for me, thankfully,” said Mrs Foster, referring to the leadership contest.

But she added she will “look forward” to working with either and has conversations with both “all the time”.

Dr Ray Bassett, who was part of the Irish Government’s Belfast Agreement talks team, and Lord Bew of Donegore were also on the panel.

Mrs Foster said outgoing Prime Minister Theresa May broke “many promises” around the backstop, which has become a focal point of Britain’s exit from the European Union.

She said unionists “cannot allow a backstop which will damage the union economically”.

She added: “I think there is an opportunity for our new prime minister to deal proactively with the issue and I am heartened by what I have heard from both Boris and Jeremy in relation to these issues.”

She said the country must “deliver on Brexit” and “get a deal that works for the whole of the United Kingdom”.

She went on: “I believe that post-Brexit, the Union, the United Kingdom, has more relevance and is more important today than in any time in its history.”

No deal must be kept “on the table”, Mrs Foster insisted.

The DUP leader added it is a “great falsehood” that “the backstop is required by the Belfast Agreement”.

She said: “Of course it’s probably – to my mind – the greatest lie told in politics today. And that’s really saying something isn’t it?”

Sir Graham told the event it would be “bizarre” for any Tory MPs to bring down the Government if a no-deal was tabled.

He said he has “no idea” whether 10 to 15 MPs in the party are planning the move.