The Duke of Northumberland’s estate company has sparked fears that seven blocks of flats could replace two thirds of the Isleworth Allotment Gardens, which have been used by locals to grow their own food for over a century. 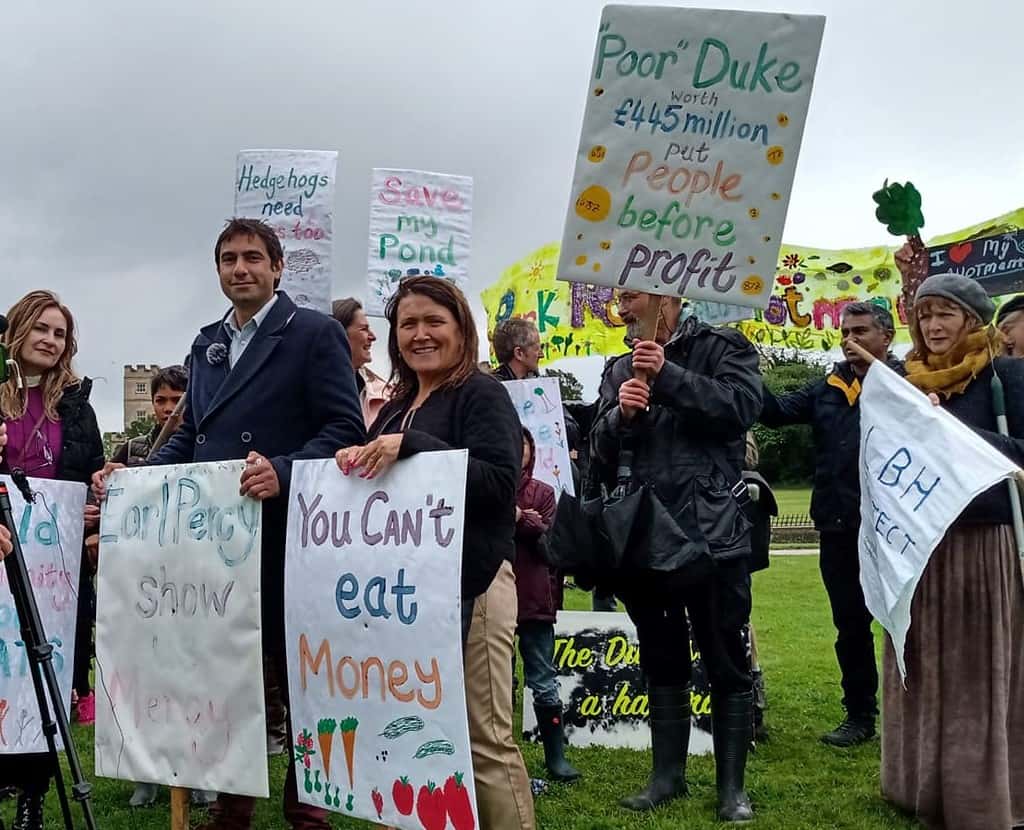 A new application for a development outside Syon Park has sparked a fresh row between London allotment holders and their multi-millionaire landlord, the Duke of Northumberland.

The Duke’s estate company, Northumberland Estates, has sparked fears that seven blocks of flats could replace two thirds of the Isleworth Allotment Gardens, which have been used by locals to grow their own food for over a century.

Councillor Salman Shaheen, who represents Isleworth on Hounslow Council, said the Duke’s ancestor gifted the land on his estate to the council in order to feed the community after the first world war, but that in 2015, the current Duke decided to convert the land into luxury flats.

The claims have been rejected by the estate, who say current plans meet local housing needs for over a third affordable housing and a similar number for NHS staff at West Middlesex hospital.

After the planning committee rejected the initial application six years ago, which would have wiped out the allotment site according to Shaheen, the Duke appealed the decision.

In 2018, the Duke lost the appeal – and Shaheen said this led to new people being prevented from using the allotments, which are now “sitting there empty”. But the estate said it has been trying to balance both allotments and housing in a “sensible” scheme, and that existing allotment holders have been allowed to stay as a “gesture of goodwill”. “Many other developers would have simply cleared them years ago,” an estate spokesperson said.

Shaheen told The London Economic: “The Duke can say there is no demand for land, people want flats.

“Current plans involve destroying two thirds of the allotments, and it’s an Asset of Community Value.”

When the Duke submitted new plans this year, over 600 people including residents, allotment holders, three Isleworth Councillors and MP Ruth Cadbury, who is shadow minister for planning, objected against the application, and a protest was held at the end of last month.

At that point the Duke’s estate wrote a letter, which Shaheen said did not make allotment holders “bow to the pressure”.

The letter criticised a “minority” of allotment holders who went to the press to raise their concerns.

It read: “It is not how we would prefer to conduct our business, but if this ultimately leads to the planning application being refused, then the allotments will not re-open and regrettably the opportunity for securing a long-term future for all the allotment holders will be lost.

“It is not a tenable position to both oppose the scheme and expect a plot on the new development.”

Contacted by TLE, the estate said it has “always been clear that continuation of allotment use is reliant on the overall scheme being approved.”

Susan Casey, Chair of Isleworth Society, a local group whose aim is to preserve Isleworth and its open spaces, said the group wants to offset  the application.

She said the land is “very important” to the group and the wider community, and that building on it goes against the council’s aim to keep it as an open space.

Casey told TLE: “It’s important for people to be able to grow their own food, for young people to understand how that happens and for people’s physical and mental wellbeing.

“Many people and councillors pointed out the value of these places, and especially during this pandemic it’s become so important for people to be active and to be in touch with nature.”

“It hosts wildlife and the housing would dramatically reduce the space of the allotments. I would like the Duke as a responsible landowner to give that land to the people of Isleworth just like his ancestor,” she added.

Stephen Hurton, chair of the Park Road Allotments Association, a group of growers who rent the allotments, said there is a lot of demand for allotments in the area, but that the estate is preventing new growers.

He told TLE: “They are trying to make the allotments derilict by design because, if they are not used, it’s a lot easier for them to say there is no interest.”

He added: “It’s the last green space in the area, with a lot of environmental benefits. It supports a huge amount of wildlife I think that is rare in the area.

“It offers better quality food and a chance for people to choose what they want to eat.

“We have thousands of houses in the area.”

A spokesperson for Northumberland Estates said the allotments are only used by a small number of people, and that the new development will both retain plots for all existing users and offer new landscaped areas which will be open to the whole community.

Colin Barnes, director at Northumberland Estates, said: “We see the planning proposals as a fair and reasonable means to achieve many goals; new allotments for the existing allotment holders, much-needed affordable housing for local people and for key workers, extensive improvements and restoration at Syon Park, creating local employment combined in a development of the highest quality bringing new homes, new life and economic benefits to the local community.”