Supermarkets said shortages were "patchy" in places, but insisted customers need not worry. 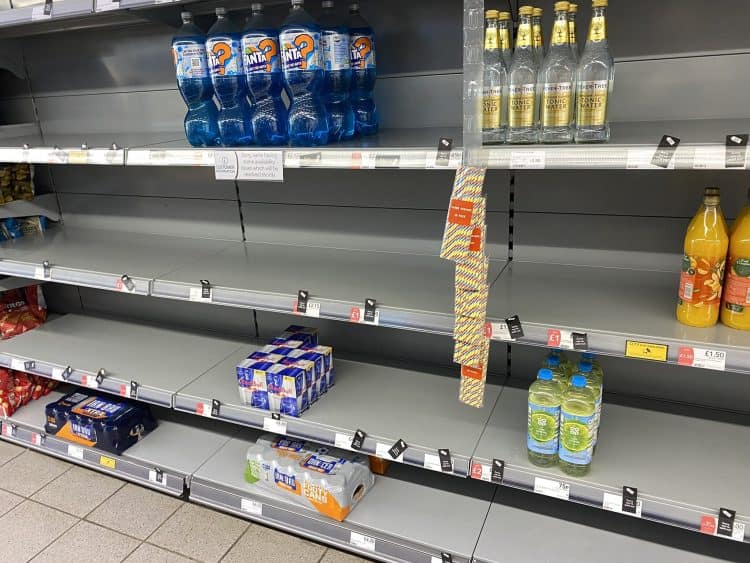 Photo taken with permission from the Twitter feed of @HapG86 of empty shelves in a Co-op. The shop replied to the Twitter user putting the low stock down to how many staff were self-isolating. Retailers are under "increasing pressure" to keep shelves fully stocked amid staff shortages caused by the "pingdemic", industry bosses have warned. Issue date: Wednesday July 21, 2021.

Supermarkets have urged Brits not to panic buy in response to reports of emptying shelves, insisting they are continuing to receive regular deliveries.

The UK’s biggest supermarkets described any shortages as “patchy” across stores but said there was no need for customers to change their shopping habits.

They added that any gaps on the shelves were temporary as they awaited deliveries, and were occurring in pockets rather than across supply chains.

The “pingdemic”, the shortage of HGV drivers and the hot weather were all contributing to delivery glitches, grocers said, while stressing to consumers that panic buying would create a problem that did not exist.

A Co-op spokesman said: “We are sorry that we are running low on some products. Like many retailers, we are impacted by some patchy disruption to our deliveries and store operations but we are working closely with our suppliers to get re-stocked quickly.”

A Sainsbury’s spokeswoman said: “We are working hard to ensure customers can find what they need.

“While we might not always have the exact product a customer is looking for in every store, large quantities of products are being delivered to stores daily and our colleagues are focused on getting them on to the shelves as quickly as they can.”

Iceland managing director Richard Walker has said staff absence rates are now double the usual number, with the figure rising 50 per cent “week on week” due to people being told to self-isolate by the NHS app.

Walker told the Radio 4’s Today programme: “We’ve now got over 1,000 staff off, who’ve been pinged. That’s double the normal rates, and it’s rising at 50 per cent week on week.

“Our big concern is that we’ve kept all of our shops open throughout the pandemic, but now we have had to close one or two shops and reduce hours in others.

“But that could get a lot worse a lot quicker, unless the country’s system is sorted out.”

Walker urged shoppers not to panic buy, saying: “There is certainly no problem with supply of stock.

“Panic-buying is only an option for those who can afford it and it often means that others go without.”

Elsewhere, sandwich chain Pret A Manger has temporarily closed 17 shops due to staff being forced to self-isolate.

The head of the British Retail Consortium, Helen Dickinson, has suggested rules around self-isolation could be amended for people working in food supply chains following rising levels of staff absence.

Dickinson suggested to BBC Breakfast that bringing forward the date double-vaccinated people will not need to self-isolate if they come into contact with a Covid-19 case could be one solution.

“There are some pilots for tested release for businesses and people who get paid to test themselves and then released back into their workplace, those pilots could be extended or that could be a new system,” Dickinson said.