By Ollie McAninch If you ever needed proof that Britain is broken, no longer can people even politely ask others to clear up their mess without being abused. This week a do-gooder and his young family have been targeted by yobs after helping to improve their local area in Minehead. It’s no wonder that we are becoming a […]

If you ever needed proof that Britain is broken, no longer can people even politely ask others to clear up their mess without being abused. This week a do-gooder and his young family have been targeted by yobs after helping to improve their local area in Minehead.

It’s no wonder that we are becoming a nation of cowards who turn the other cheek and quietly mutter under our breath.

Disabled father of four, Steven Heard, who is profoundly deaf, diabetic, and has serious mobility problems, has been encouraging other dog walkers to clear up their mess following a huge dog poo and litter problem in the area. However, he has since been targeted by a vile yob sending anonymous hate letters about his campaign.

In an attempt to clean up the area, Steven has even been clearing up other people’s mess on his mobility scooter, sometimes up to 50 poo-filled bags per day.  After receiving verbal abuse when asking other dog owners to pick up their mess, Steven has since spent his own money buying signs to place around the area instead, which West Somerset Council claimed they could not afford due to cuts. 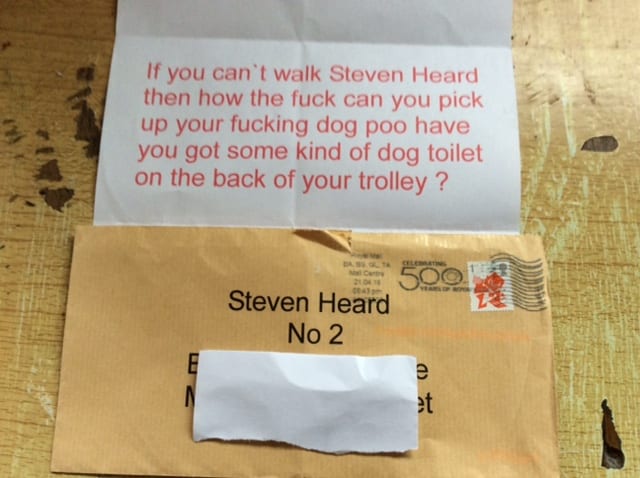 However, a vile troll has now been bombarding Steven with anonymous hate letters referring to his clean up campaign.  The letters, containing highly offensive language, refer to Steven as a ‘Fat Ass Layabout Fucking Dog Shit Complainer’ and ask if he has ‘got some kind of dog toilet’ on the back of his trolley.  The letters also threaten to ‘put are [sic] dog shit in your garden’ if Steven continues to put up ‘clean up after your dog’ signs. 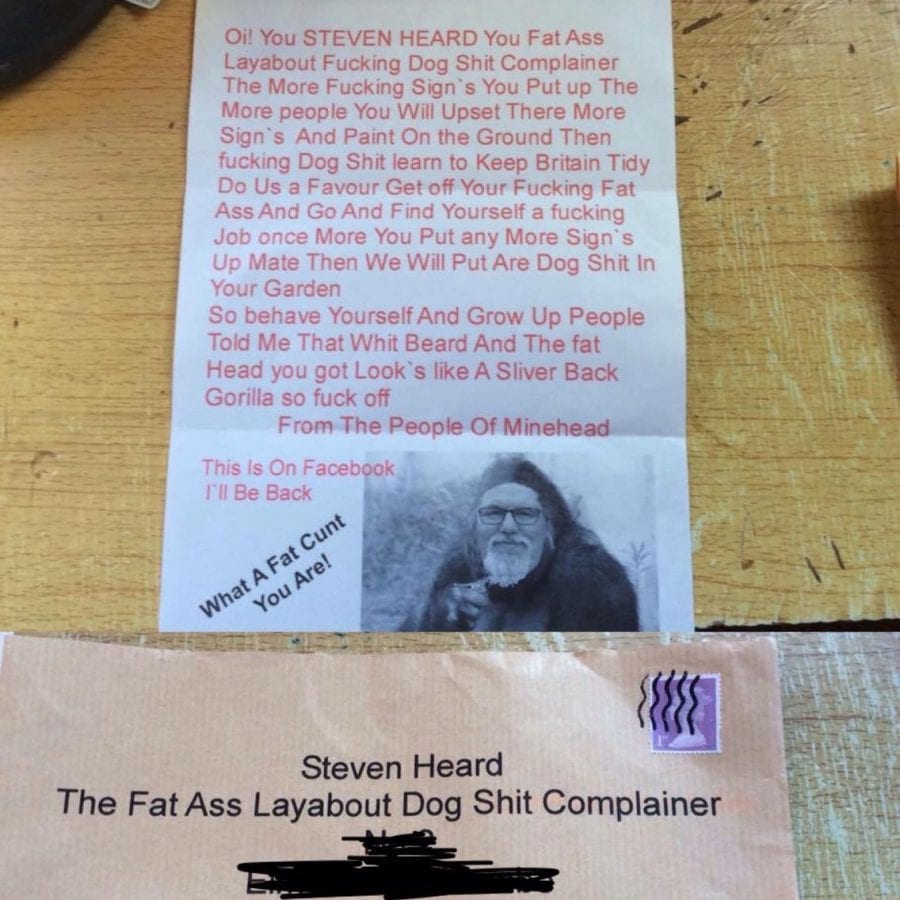 Steven is visibly shaken by the vile and cowardly hate mail he is receiving:

“I worry about my wife and four girls. My wife got really upset. She still goes to work to care for me and my family as I can’t work. Having someone calling me fat bastard and a scrounger is really upsetting.  I can’t work anymore, so instead I’m trying to do something positive within the community.”

“What has the world come to when a person can’t try to make their local community a better place without receiving this kind of abuse? It’s not as though asking people to clean up after themselves is controversial, but most people react very aggressively.”

“The fact that he or she knows where I live is extremely unnerving for me and my family.”

“I have reported it to the police three times and have been given a crime number.” 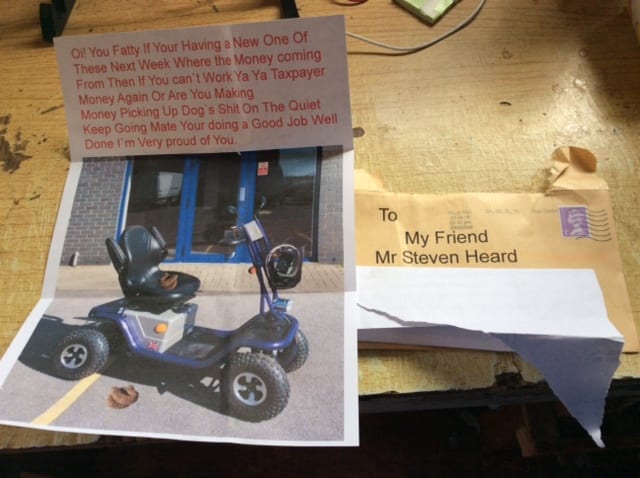 “Steven added, I just don’t understand the logic of leaving your dog’s mess in parks and public places.  What I find even stranger is when people do clean it up, and then throw the poo filled bag into a hedge or onto the grass.”

The main reason for dog fouling laws is because dog faeces are not only disgusting, but they pose a serious health hazard to humans and can lead to toxocariasis.

Toxocariasis causes serious illness and even blindness. It is caused by a parasite known as Toxocara Canis (also known as Roundworm). These parasites live in dogs’ digestive systems. Eggs are released in the faeces of infected animals and contaminated soil. If someone ingests infected material, the eggs may hatch into larvae and can lead to toxocariasis.

Do you know who is sending this hate mail?  If so, please get in touch with The London Economic: contributor@thelondoneconomic.com

Did you know that it is considered normal for citizens to reprimand others for wrongdoing in most other European countries.  One of our German writers tells us “It is very strange in Britain that if you tell someone off for wrongdoing, like throwing litter, many people immediately retaliate with aggression. I have lived in Germany, France and Spain where it is not only accepted, but expected that you point out to someone if they are doing wrong.”

If you are sick and tired of yobs and vandals ruining our country, share this article. Let’s beat the thugs by standing together.