One child was booed into his face and a mother was told she was a "whore". 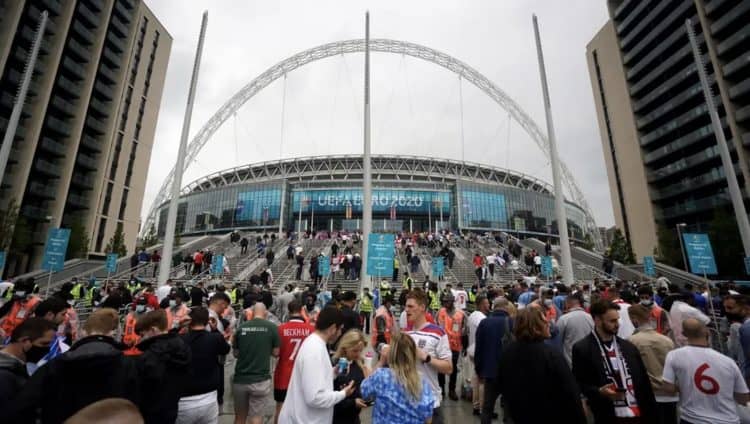 Several Denmark fans said they were verbally abused by England supporters during the Euro 2020 match at Wembley.

One mother told The Observer that her nine-year-old child was “booed in the face” and that England fans shouted slurs including “fuck Denmark” at her and her husband.

“Our nine-year-old son was booed directly into his face by one fan,” said Imaan Madsen, a Danish citizen living in the UK.

She added: “He had the Danish flag painted on his face and wore a Viking hat and a Denmark kit.

“We had to wipe the colour off his face and cover up his clothes to stop the abuse. I am absolutely gutted with the behaviour of some English fans, especially towards a child.”

She added: “We had a Danish flag and they were trying to take it away from me.

“Then they started pulling my hair as well and I couldn’t believe what was happening. It was quite frightening.”

Allan Nielsen told The Observer that he witnessed Denmark children fans being spat at and that police nearby did nothing about it.

He said: “Overall the whole experience was very frightening and we felt like we were walking in a war zone and that it was just a matter of time before someone would come at us.”

Birgitte Surtees who attended the match with her English husband and their son said the seats around them filled up with English supporters.

She said one fan shouted in her ear how “shit Denmark was, how shit I was and that I was a whore”.

“There was no security around and after being shouted at we managed to move a few seats away from the ones we felt were the most aggressive,” she added.

Italian newspapers said today that the world is supporting their football team in tonight’s final against England.

Il Corriere dello Sport claimed “the whole world is supporting Italy” – whilst Il Messagero said “the whole of Europe” does.

And La Stampa argued the England team was trying to make up for the “humiliation” of Brexit.

According to a poll carried out by YouGov, both English and Italian fans agree that the rest of Europe will be supporting Italy. England fans think this by 49 per cent to 21 per cent, whilst Italians think the same by 57 per cent to nine per cent.

Meanwhile, 41 per cent of England fans think Gareth Southgate’s team will win and 34 per cent think Italy will.