“It’s the quintessential British song, it gets you in the mood and gives you goosebumps," one Londoner said. 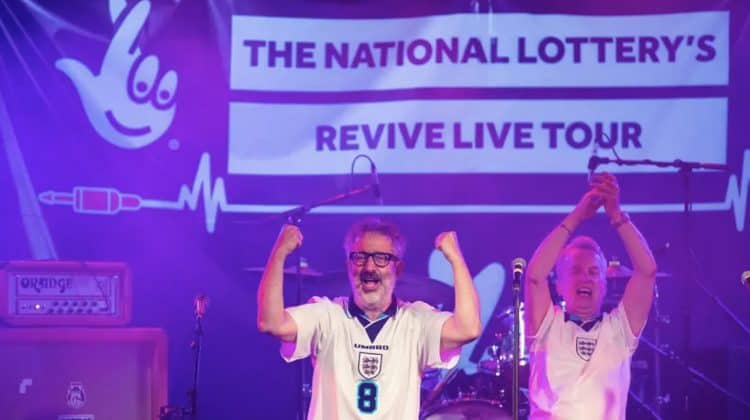 The Lightning Seeds delighted England fans by reuniting with comedians Frank Skinner and David Baddiel for a rousing rendition of their Three Lions song ahead of the Euro 2020 final.

The band played a concert at the 229 music venue in central London on Sunday afternoon for 200 people, on a stage decked out in flashing lights and St George’s flags.

Fans screamed and cheered as World Cup winner Sir Geoff Hurst took to the stage to introduce the two comedians for the performance of Three Lions (Football’s Coming Home).

The venue became a sea of flags as the crowd became jubilant, singing and jumping along to the tune.

Security gave up attempts to remove people from standing up in their chairs and one man took his shirt off.

Some audience members were visibly emotional.

The performance came at the end of The Lightning Seeds set, in support of the National Lottery’s Revive Live Tour, which is backing the return of live music to grassroots music venues in the wake of the pandemic.

Matt Armitage, 26, from London, told the PA news agency: “It was amazing.

“At the end there we were absolutely losing it, England flags waving everywhere.”

David Smith, 51, from Grimsby, said: “It was absolutely amazing and surreal.

“I said to my wife that it was my Woodstock moment.

“I started crying, I was so emotional.

“To see Sir Geoff Hurst introduce the best song ever.

“This is our moment, we’ve waited so long for this.

Phil Chambers, 41, from Islington said: “It was incredible.

“We got to see Geoff Hurst on stage with Skinner and Baddiel and The Lightning Seeds and I don’t think that’s ever happened or will ever happen again.”

Fans started lining up outside the venue just before noon, with many clad in Three Lions shirts and carrying St George’s flags.

Angie Somerside, from London, said she had worked on the second version of the song while working at Sony Records in the marketing department.

She bought tickets to take her daughter Lill, 16, to Sunday’s gig because “she likes football and her dad was also in the music video”.

Ms Somerside told the PA news agency it has been “emotional” to see the song evolve.

“Not just because I was involved but because it’s a brilliant song,” she said.

Jordan Alamey, 28, from Islington, said he managed to get tickets through his friend to listen to the “best song in the world”.

He added: “It’s the quintessential British song, it gets you in the mood and gives you goosebumps.”

James Taylor, 21, travelled down from Cambridge with his family for the game and booked tickets for the gig because he wanted to “add a bit more to the day”.

He told PA that “even if tonight were to go badly” he still thinks the song will stay in the charts for a while and believes the score will be “2-0” to England.

The crowd buzzed with anticipation as fans waited for The Lightning Seeds to take the stage.

People sang along to 90s and early noughties songs being played through the speakers, including the Oasis hit Wonderwall, Under The Bridge by the Red Hot Chili Peppers and The Reason by Hoobastank.

The band kicked off the concert with their 1994 song Marvellous and sang other hits, such as Sugar Coated Iceberg.

The audience enthusiastically clapped and cheered along, waved their own England flags in the air and some stood up and danced along.

“You can sense a real buzz in London today, it’s like something is about to pop.”

Others were excited at the prospect of enjoying live music again.

Ben McDonald, 19, from Hampshire, told PA he came because he missed going to gigs.

He said: “I came for the live music.

“It’s been so long, and I love The Lightning Seeds, but the atmosphere with the football fans is really fun.

“You can definitely feel something building up.”