Ben Wallace fought back tears as he discussed the Taliban takeover of Kabul on Monday morning. 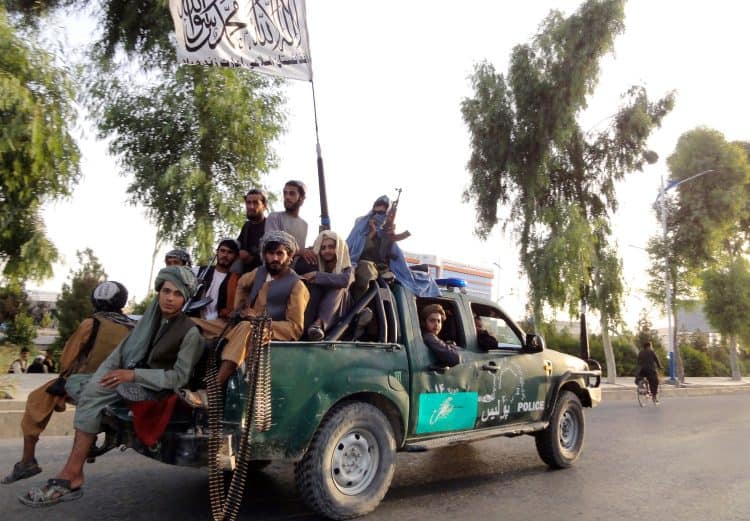 Defence Secretary Ben Wallace has admitted “some people won’t get back” from Afghanistan as a desperate struggle to get UK nationals and local allies out of the country continued.

Wallace, who previously served in the Scots Guards, appeared to choke up while appearing on the LBC radio station on Monday morning as he spoke about the evacuation effort from the country, which has fallen to the Taliban following the withdrawal of Western troops.

British troops are racing against the clock to get remaining UK nationals and their local allies out of Afghanistan following the dramatic fall of the country’s Western-backed government.

But becoming emotional while speaking to LBC, Wallace spoke of his regret that “some people won’t get back”.

Asked why he felt the situation “so personally”, Wallace replied: “Because I’m a soldier… because it’s sad and the West has done what it’s done, we have to do our very best to get people out and stand by our obligations and 20 years of sacrifice is what it is.”

Defence Secretary Ben Wallace breaks down admitting "some people won't get back" from Afghanistan and "it's sad that the West has done what's it's done."
@NickFerrariLBC pic.twitter.com/UKMrUAQlDx

Lead elements of 16 Air Assault Brigade were working with US forces to secure Kabul airport to ensure flights can continue as Afghans and foreigners alike scramble to leave.

Wallace said the barrier to helping more people leave the country was how quickly they could be processed.

He told BBC Breakfast: “Our flights, our planning and coming in and out and soon if we manage to keep it in the way we’re planning to, we should have capacity for over 1,000 people a day to exit to the UK. Currently this is not about capacity on planes, it’s about processing speed, so that’s why we’re trying to fix that.”

Wallace said: “Our timescale which we’d originally planned, which was August 31, will be out. We will try our very best to get everyone out, it’s one of the biggest regrets of the speed of the collapse of the Afghan government is that those timetables will no doubt have to be shortened and that’s what we’re moving extra assets to do…”

He added: “We put in over 600 forces yesterday, today and over the weekend to make sure that we can keep a secure part of the airport functioning and, at the same time, to effectively process, manage and escort people on to our flights to get them out of Afghanistan.”

Wallace said the government was aiming to fly out a further 1,500 people over the next 24 to 36 hours or slightly longer.

Kabul airport has so far not come under attack but there are fears that could change quickly with Taliban insurgents now effectively in control of the capital.

Triumphal fighters were pictured in the presidential palace abandoned by President Ashraf Ghani, who fled the country while his forces gave up the city without a fight.

Conservative MP Tobias Ellwood, a former captain in the British Army and chairman of the Defence Select Committee, criticised the West for pulling out of the country.

Appearing on Sky News, he said: “The world is now a little bit more dangerous because they’ve now taken control of the country, and the West should really hang its head in shame after abruptly abandoning Afghanistan to a civil war after two decades of effort.”

Following a meeting of the government’s Cobra emergencies committee on Sunday, Boris Johnson said his priority was to get UK nationals and Afghans who had worked with them out of the country “as fast as we can”.

Around 4,000 British nationals and eligible Afghans are thought to be in the city and in need of evacuation.

In a sign of the desperate situation, the British ambassador Sir Laurie Bristow was said to be helping the small team of diplomats still in the country to process the applications of those hoping to leave.

There was particular concern for the safety of Afghans who worked with British forces when they were in the country as interpreters and in other roles amid fears of reprisals if they fall into the hands of the insurgents.

The Taliban insisted that they were seeking a peaceful takeover of power and were prepared to offer an amnesty to those who had worked with the Afghan government or with foreign governments.

However those assurances were being treated with deep scepticism by many British MPs amid reports of threats to those who remain and their families.

Labour called on the government to urgently expand the resettlement scheme for Afghans to ensure that none were left behind.