“We remain in the middle of a public health crisis, and by gathering in large numbers – such as today’s protest – puts others at risk. We advised those in attendance to leave but many refused to do so." 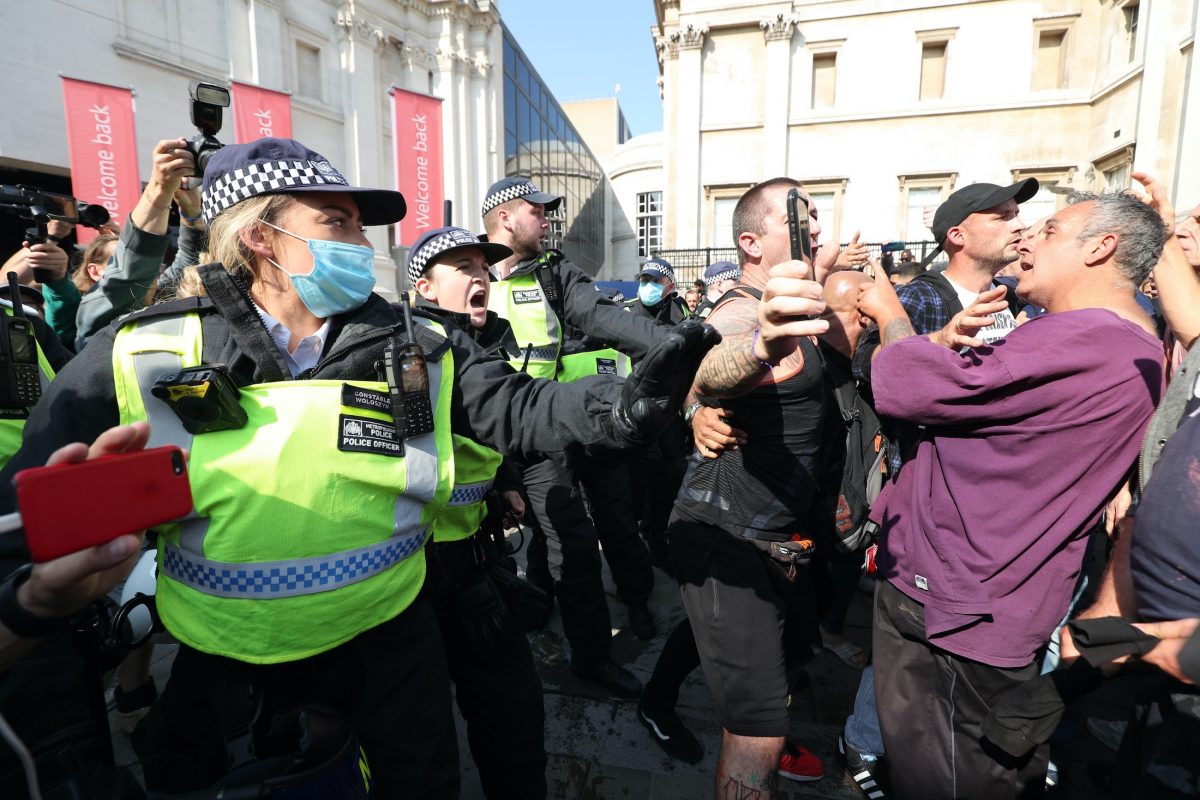 Police have condemned “unacceptable” outbreaks of “hostility and violence” towards officers at a large anti-vax, anti-lockdown protest in central London during which 32 people were arrested.

Hundreds descended on Trafalgar Square on Saturday afternoon for a “Resist And Act For Freedom” rally, including some bearing 5G conspiracy placards and signs declaring Covid-19 a “hoax”, with police repelled by human blockades as they tried to clear the area.

Dozens of officers, including some on horseback and in riot gear, were pushed back by crowds who chanted and cheered, with some throwing missiles.

At least one protester was seen with a bloodied head while another was seen receiving medical attention on the ground, and the London Ambulance Service said three patients were assessed with one taken to hospital.

The London landmark was cleared of protesters after 5pm, and Scotland Yard said 32 people were arrested for offences including violent disorder, public order and assault on an emergency worker, as well under Covid regulations.

Superintendent Emma Richards said: “We remain in the middle of a public health crisis, and by gathering in large numbers – such as today’s protest – puts others at risk. We advised those in attendance to leave but many refused to do so.

“The amount of hostility shown towards officers, who were simply there to keep people safe, is unacceptable. More than 30 people were arrested and they remain in custody.”

The protest came a day after Mayor of London Sadiq Khan warned it is “increasingly likely” restrictions will be needed to slow the spread of coronavirus in the capital, adding he was “extremely concerned” about the rate of transmission in London.

The number of cases per 100,000 people over seven days is reported to have increased in London from 18.8 to around 25.

Police said they had to take “enforcement action to disperse” the crowds after officers who had attempted to “explain, engage and encourage them to leave” were met with “hostility” and “violence” from some demonstrators.

Protests are exempt from new legal restrictions introduced on Monday limiting groups to six, but only if it is “organised in compliance with Covid-19 Secure guidance”, the Government said.

One speaker at the rally, Professor Dolores Cahill of University College Dublin (UCD), expressed the view that the coronavirus vaccine will “make people sick”, going against mainstream scientific opinion.

The UCD has previously disassociated itself from views on Covid-19 aired by Prof Cahill, who also chairs the Eurosceptic Irish Freedom Party, the Irish Times reported.

Vaccines are the most effective way to prevent infectious disease and have virtually eradicated smallpox, polio and tetanus in the UK, the NHS says.

But if people stop getting vaccinated then diseases can quickly spread again, it said, pointing to a spike in measles and mumps between 2016 and 2018.

There is no evidence that vaccines cause autism, allergies or other conditions, weaken the immune system in any way, or contain harmful ingredients, it adds.