Ireland’s Foreign Affairs Minister was responding to reports of a speech Lord Frost is preparing to give in Portugal in Tuesday, in which he will make removing the role of the European Court of Justice (ECJ) in Northern Ireland a red-line issue. 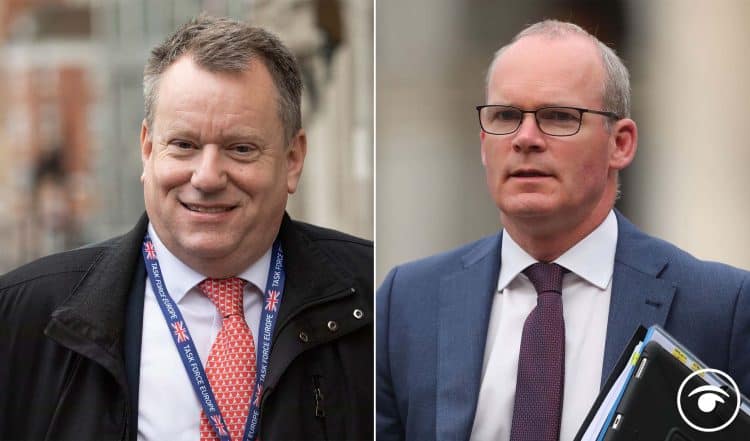 Simon Coveney has questioned if the UK wants “a breakdown in relations” with the European Union in a late night Twitter spat with Brexit negotiator David Frost.

Ireland’s Foreign Affairs Minister was responding to reports of a speech Lord Frost is preparing to give in Portugal in Tuesday, in which he will make removing the role of the European Court of Justice (ECJ) in Northern Ireland a red-line issue.

The speech will come a day before the EU is expected to produce “far-reaching” plans to resolve issues with the Northern Ireland Protocol, which prevents a hard border in Ireland, but has led to economic barriers between Northern Ireland and Britain.

Brussels has indicated it will provide solutions on the flow of chilled meats and medicines into Northern Ireland from the UK, but has ruled out removing the oversight role of the ECJ.

Late on Saturday night, Mr Coveney tweeted: “EU working seriously to resolve practical issues with implementation of Protocol – so UKG (UK Government) creates a new “red line” barrier to progress, that they know EU can’t move on…. are we surprised?

“Real Q: Does UKG actually want an agreed way forward or a further breakdown in relations?”

Responding, Lord Frost said: “1. I prefer not to do negotiations by twitter, but since @simoncoveney has begun the process… …the issue of governance & the CJEU is not new.

“We set out our concerns three months ago in our 21 July Command Paper. The problem is that too few people seem to have listened.

“2. We await proposals from @MarosSefcovic. We will look at them seriously & positively whatever they say.

“We will discuss them seriously and intensively. But there needs to be significant change to the current situation if there is to be a positive outcome.”

European Commission vice president Maros Sefcovic announced last week that the EU is preparing to table “very far reaching proposals” to address issues that have arisen with the protocol.

He said the proposals, which will focus on customs, medicines, animal checks and representation for Northern Ireland politicians in the EU, carried a “political risk” because of threats by the UK Government to trigger Article 16, which would override much of the protocol.

“I sincerely hope that it will be seen as such by our UK counterparts and they engage constructively in our discussion, because I think we have to move from

the tough political rhetoric, from the threats we hear all the time, down to the business that actually solves the problems” he said.

But Mr Sefcovic firmly ruled out removing the role of the ECJ.

He said: “To be quite honest, I find it hard to see how Northern Ireland would stay or would keep access to the single market without oversight of the European Court of Justice.

“Do we want to deprive the people of Northern Ireland of this tremendous opportunity, this huge advantage? Do we want to do that?”

Lord Frost will use his speech on Tuesday to insist the ECJ is removed.

“The EU now needs to show ambition and willingness to tackle the fundamental issues at the heart of the protocol head on” he is expected to tell the diplomatic community.

“The commission have been too quick to dismiss governance as a side issue. The reality is the opposite.

“The role of the European Court of Justice in Northern Ireland and the consequent inability of the UK Government to implement the very sensitive arrangements in the protocol in a reasonable way has created a deep imbalance in the way the protocol operates.

Tinkering around the edges

“Without new arrangements in this area, the protocol will never have the support it needs to survive.”

A UK Government source threatened that Britain would trigger Article 16 of the protocol if the EU proposals amount to “tinkering around the edges”.

The protocol was negotiated to avoid a hard border with Ireland, by effectively keeping Northern Ireland in the EU’s single market for goods.

But unionists have been pressuring for it to be scrapped because of the trade barriers it has created on products crossing the Irish Sea from Great Britain.

Lord Frost will also this week share a new legal text with the European Commission to propose the “foundation” for a new protocol to support the Good Friday Agreement.