In the bedroom were several machetes, an axe and two sizes of crossbow 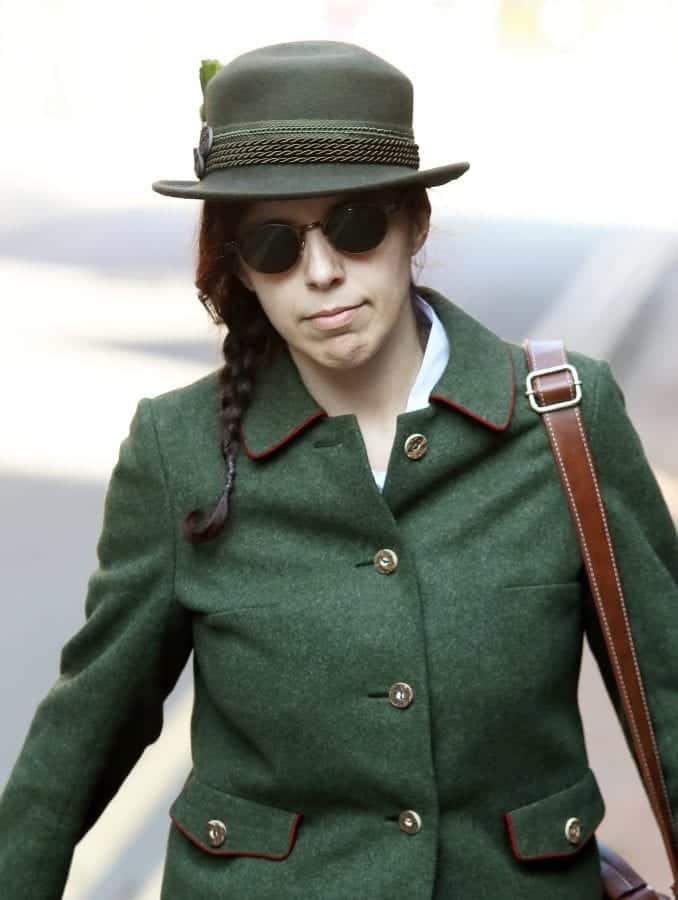 A couple who belonged to a banned neo-Nazi terror group and named their son after Adolf Hitler kept a swastika-shaped pastry cutter in their kitchen, a court heard.

Jurors heard Claudia Patatas, 38, and Adam Thomas, 22, also stashed an arsenal of weapons under their bed.

The couple even had racist Christmas cards – including one bearing a picture of KKK members and the message “May All Your Christmasses Be White”.

The court heard Thomas used clothing as target practice for his crossbows in his garden.

Prosecutor Barnaby Jameson QC said: “In their home was the image of a swastika on a cushion.

“On a laptop was found the Anarchy Cookbook Version 2000.

“The Anarchy Cookbook has information on making the following: Dynamite compositions. Low explosives (‘black powder’). ‘Pipe’ hand grenade. ‘TNT’ manufacture along with other high explosives including ‘RDX’. Improvised explosive devices including a ‘soft drink can bomb.’

“In the bedroom shared by Thomas and Patatas were several machetes and an axe (found under the bed).

“Also under the bed were two sizes of crossbow. Clothing found in the garden has holes consistent with crossbow bolt contact.

“Clothing was being used as target practice.

“On a mobile belonging to Patatas was found a photograph of a NA stall behind the sign ‘Only bullets will stop us’.

“There is also an image of Thomas with a crossbow under a KKK flag and an NA poster pinned to a fridge – ‘Britain is Ours The Rest must Go!’”

“On January 3, 2018, Thomas and Patatas were arrested under the terrorism legislation. A further search of the address took place.

“In the hallway was a ‘KKK’ pendant and a pendant with the symbol of the black sun.

“There are images we have seen of Thomas, Fletcher (another National Action member), Patatas and their infant child.

“These were found on a memory card under the floor under the main table in the house.

“A man’s jacket is found with a Swastika armband and a metal skull pin – the symbol of the SS division.

“There are Christmas cards saying ‘May All Your Christmasses Be White’ – with pictures of members of the KKK.

“There is a pastry-cutter in the form of a swastika.

“In the kitchen is a handwritten piece of paper with Swastikas and the image of a figure in KKK robes.

“Numerous sports vests with the SS motif were found around the property.

“There were a number of books on Nazi-ism and the copy of a letter written by the leading Nazi, Heinrich Himmler.

“There are other images from a Samsung mobile of someone – almost certainly Thomas – cradling his child while in KKK robes.

“In the bedroom was a machete with a distinctive hole on the end.

“There were parts of Hitler’s autobiography in a storage cupboard, a book on women in the Third Reich and a book about the occult roots of Nazism.

“In the bedroom were also crossbow bolts and a swastika flag.

“In Patatas’ wardrobe it appears Thomas stored his KKK robes.

“In the garden was a jacket that had been shot with a crossbow.

“There is some kind of target.

“Why was there such an extensive degree of weaponry in this house? Why is it that the clothes are covered in holes? Why was it necessary for anyone to be firing a crossbow into the clothes?”

The pair are charged with being members of the banned far-right terrorist group National Action, along with Daniel Bogunovic, 27.

Prosecutor Barnaby Jameson QC said: “February 2, 2017 – Patatas messages Fletcher on Whatsapp – ‘And all Jews must be put to death.’”

Mr Jameson said: “The Final Solution, as you know, relates to the final solution to the Jewish question – a Nazi euphemism for the eradication of Jews.

Detectives also found Bogunovic searched the definition of “racial hatred” under the Public Order Act 1996 on his phone.

“There is also what looks like a swastika badge.”

Other members of National Action pleaded guilty to membership of the banned neo Nazi terror group, including Darren Fletcher, 28, of Wednesfield, West Midlands, who went on stage wearing KKK robes holding a golliwog in a noose.

“Going back to March 15, 2013, we can see an early interest in giving the Nazi salute from Thomas and Fletcher.

“Thomas at the time was 16. The same month we know Fletcher attended an extreme right wing rally in Wales and went on stage wearing KKK robes holding a golliwog in a noose.

“On April 17, 2014, an image is created on a thumb drive found at the address of Bogunovic.

“Thereafter it was deleted. It shows the title words – ‘National Action Strategy and Promotion’.

“It is fair to say Bogunovic had an early interest in what was then a nascent organisation.

“October 3, 2015 there is a Skype conversation between Deakin and Bogunovic concerning the stickering of campuses.

“December 10, 2015 an image is created on one of Deakin’s devices showing the geographical regions of NA.

“March 13, 2016 – images on Bogunovic’s mobile created/modified of various NA stickers put up on a building at De Montfort University, Leicester.

“1933 was the year Hitler became Chancellor of Germany.

“July 5, 2016 – there is a conversation between Deakin and Bogunovic on Signal Private Messenger about a meet-up for new recruits in Birmingham.

“Bogunovic and Deakin were later convicted of stirring up racial hatred in relation to the stickering at Aston University.”