Police say the victim, believed to be in his twenties, is in a "critical" condition following the incident in Arnos Grove 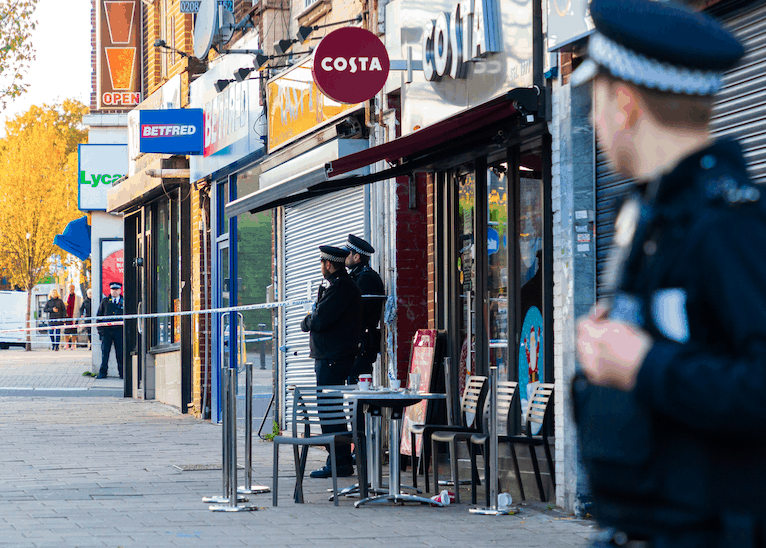 A ‘calm’ customer grabbed a knife and stabbed another man inside a Costa coffee shop in front of horrified staff today.

Police say the victim, who has not been named but is believed to be in his twenties, is in a “critical” condition following the incident at about 11.30am this morning.

Shocked eye-witnesses said a row erupted inside the coffee shop ending with the victim on the floor with ‘severe stab wounds’.

Police and paramedics rushed to the Costa shop in Arnos Grove, north London, at around 11.30am – before an air ambulance had to be called.

Women staff members stood crying in the street – with one rushing to nearby shops asking for the police to be called.

The assailants ran off down a side street before four police cars arrived and he handed himself in.

A crime scene cordon has been set up blocking the road on Bowes Green, just near the tube station.

Detectives remain at the scene, with an officer using a police dog to search under nearby cars for evidence.

Residents have spoken of their horror after they realising there had been another stabbing in the capital.

Local resident Burak Demieci, 30, said that a man came out of the coffee shop and began to run down a side street.

He said: “It was really weird – the man that did the stabbing was so calm.

“He just jogged halfway down the road and gave up and walked away slowly.

“A black man in his early twenties chased him down and somehow convinced the man to hand himself in.

“I don’t know who that man was, but he was brave to approach the suspect.

“The guy walked up and surrendered to police – a group of people gathered and demanded to know why he did it.

“He just stood there calmly and stared forward, he was silent and didn’t say a thing.

“The knife was on the floor, it was a small one, about 15 centimetres –
I think it could have been a knife from Costa.”

An anonymous witness said: “The three women worked inside Costa – they came running out crying.

“A man had kicked off in the middle of the shop – he was late twenties, early thirties.

“He looked unsuspecting – a bit geeky if anything, he looked like an awkward man, he had glasses on.” 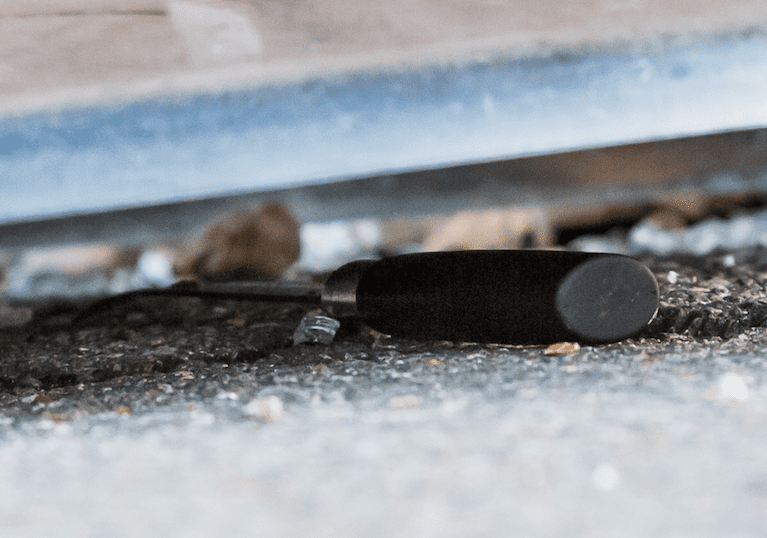 Tracey Constaniou, 25, owner of a nearby fish and chip shop, said: “A man burst into the shop and asked to hide.

“I heard a lot of shouting outside and police were everywhere – it was chaos.

“Someone was pulled into an ambulance, but you couldn’t see them properly.

“They were taken over to the school where an air ambulance took them away.

One resident, who asked not be named, said: “Everyone was panicking running this way and that.

“Police chased someone round the back of the shops, I heard he was arrested.

“There was a helicopter which landed in a nearby school and the victim was taken away.

“You hear about stabbings in London, but you don’t expect it to happen next to you when you’re having a cup of tea.”

Another resident Leroy Dennis, 62, said: “When I saw the cordon, I knew – it must have been another stabbing.

“I pray for mercy for these young men and women, what we see daily here is so sad.”

A Scotland Yard spokesman said: “Police were called to reports of a stabbing inside a commercial property on Bowes Road at 11.33am on Monday November 12.

“Officers attended alongside paramedics and London’s air ambulance and found a man suffering from stab injuries.

“He was taken to hospital in a critical condition.

“One man was arrested at the scene and taken to a nearby police station where he remains in custody. Enquiries continue.”

The toll of 119 homicides in 2018 (murders and manslaughters) includes 69 fatal stabbings and 14 shootings.