Countries are planning production of oil, coal and gas over the next decade at levels that is “dangerously” out of sync with targets to curb climate change, the UN has warned. 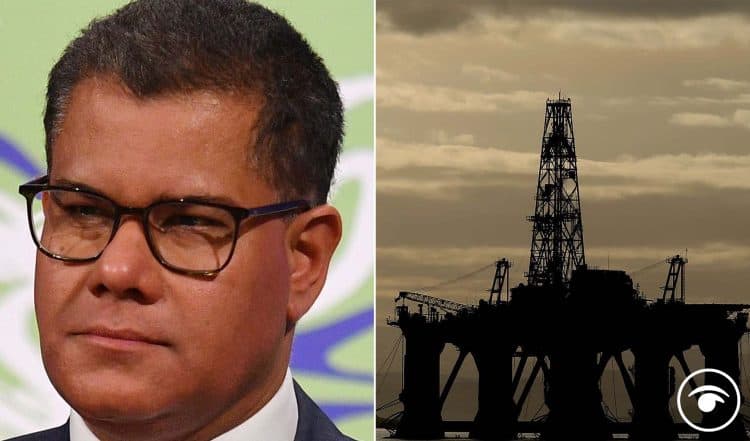 Alok Sharma has told the formal opening session of the crunch climate summit in Glasgow that it is the last, best chance to keep temperature limits to 1.5C.

However, he then refused to back a carbon tax on meat and the Scottish Secretary said he was 100 per cent behind the Cambo oilfield.

As he assumed the role of Cop26 president, Mr Sharma said he believed the conference could launch a decade of ever-increasing ambition and action.

However, he warned countries gathered for the talks, which aim to prevent dangerous temperature rises, that they would succeed or fail as one.

Mr Sharma told delegates: “The rapidly-changing climate is sounding an alarm to the world to step up on adaptation, to address loss and damage, and to act now to keep 1.5 alive.

Alok Sharma also signalled he is against introducing higher taxes on meat, saying he prefers a “carrot rather than stick” approach to tackling climate change.

Environment Secretary George Eustice, in an interview with the Telegraph, appeared to raise the prospect of taxes on high-carbon foods such as meat and diary.

He told the newspaper the UK will need to “move into the realms of things like carbon taxes” when existing European Union agricultural subsidies are finally phased out.

But Cop26 president Mr Sharma said he believed what people ate was a “personal choice”.

The former business secretary told BBC’s Andrew Marr Show that taxes were for the Treasury to consider, but he believed in “incentivising” people to change their behaviour for the good of the climate.

“I have been very clear that, on a personal level, I am someone who very much believes in carrot rather than stick, trying to encourage people to move in the right direction,” Mr Sharma said.

Asked whether he thought people should eat less meat to reduce the impact on the climate, Mr Sharma replied: “That’s a personal choice.

“What we need to make sure as a Government is that we are incentivising people to make decisions in the same way that we have grants to support people to buy ultra-low emission vehicles, you’ve got the boiler money that has now been announced in terms of replacing boilers with heat pumps.

“That, I think, is the way you help people and support them to make those decisions.”

Also, Alister Jack, the Scottish Secretary, backed the development of a massive new oil field off the coast of Shetland despite claims it would fly in the face of UK Government climate change commitments.

He said he “100%” supported the opening of the Cambo field and claimed “it’s foolish to think we can just run away from oil and gas – we can’t”.

Asked if the field should open given the UK’s lead role in climate negotiations, Jack told the BBC: “100% we should open the Cambo oil field.

He added: “We still need oil for our petrochemicals industry to make instruments for NHS, that won’t stop.

“We’ll stop the combustion engine production by 2035. But it won’t change the fact we will still need oil for products.

“We have to be realistic about that. It’s foolish to think we can just run away from oil and gas – we can’t.

“But we can reduce our requirements on it for energy.”

When Sharma was quizzed on the prospect of the oil field being granted approval, he said experts had recognised that even a net-zero economy would need some oil and gas.

However, he said the country would have to “wait and see” whether the oil field gets the go-ahead, with the application and consultation currently being considered.

He dodged the question on the Andrew Marr Show this morning.

Countries are planning production of oil, coal and gas over the next decade at levels that is “dangerously” out of sync with targets to curb climate change, the UN has warned.

A report by the UN Environment Programme (Unep) and research institutions found that planned production by fossil fuel-producing countries, including the UK, is 110% above – more than double – the levels that will allow the world to curb temperature rises to 1.5C.

Despite increased climate action and pledges, the fossil fuel production “gap” between countries’ plans and what scientists say is needed to curb dangerous warming has hardly changed since a first report on the issue by the UN in 2019.