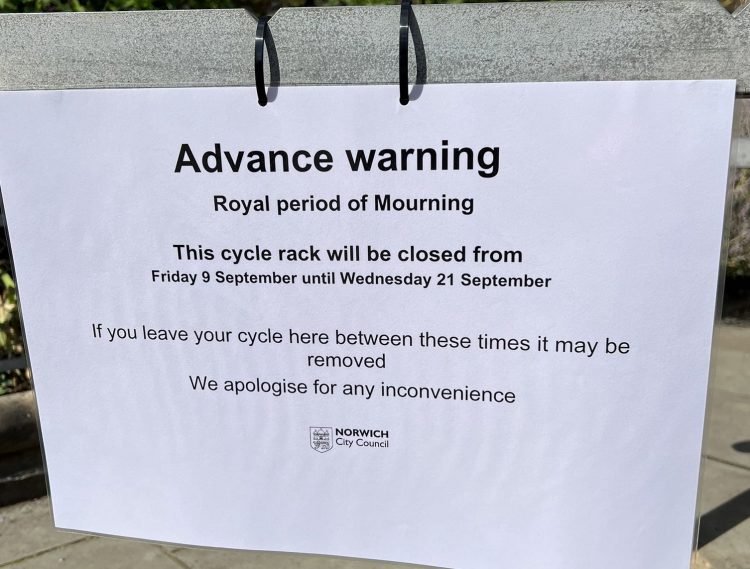 A council was forced to change signs banning people from using bike racks due to the period of Royal mourning after being mocked online.

Many took to social media to complain after Norwich City Council’s decision to close various bike racks throughout the city to mourn the late monarch, who died on Thursday.

The metal racks have been closed from September 9 until September 21 and the original sign gave no explanation other than the period of mourning and threatened to remove any bike found on the rack during this time.

New signs explained they have been temporarily closed to make room for mourners laying flowers and queuing up to sign a book of condolences.

Jeremy Hutchinson, 30, who was visiting Norwich for a wedding, tweeted: “Because of the royal period of mourning, you can’t lock your bike to a cycle rack in Norwich.”

Mr Hutchinson added: “When I first took the photo I wasn’t really aware of the reasoning behind it, so it definitely seemed like a very weird and very funny thing to stop people doing.

“Even with the explanation, it doesn’t feel like it would be busy enough to justify removing it from action for 12 days, or that it would cause so much disruption if people did still use it.

“It feels like maybe the council were overthinking things. It certainly seems to have created a lot of heated debate.”

Norwich City Council said the racks were closed as they sit near where mourners can lay flowers in tribute to Her Majesty.

After the confusion, the authority said new signs were put in place.

A spokesman added: “As part of our careful and respectful response to the passing of Queen Elizabeth II we have closed one cycle rack outside City Hall which is within the designated area where people can lay their floral tributes.

“The sign is in place to help ensure the flowers that people have so carefully laid in place to pay tribute to the Queen aren’t damaged by people accessing their bicycles.

“Similarly, a second bike rack outside City Hall is also closed as this is in the area where people queue to sign the book of condolence to the Queen.

“All other cycle racks in the city remain open, including those just a few feet away from City Hall.

“To clear up any misunderstanding, we’ve replaced the signs with new ones to make things a little clearer.”

This has left some people bemused: