It comes as a petition to 'make lying in parliament history' closes in on the 150,000 signature mark. 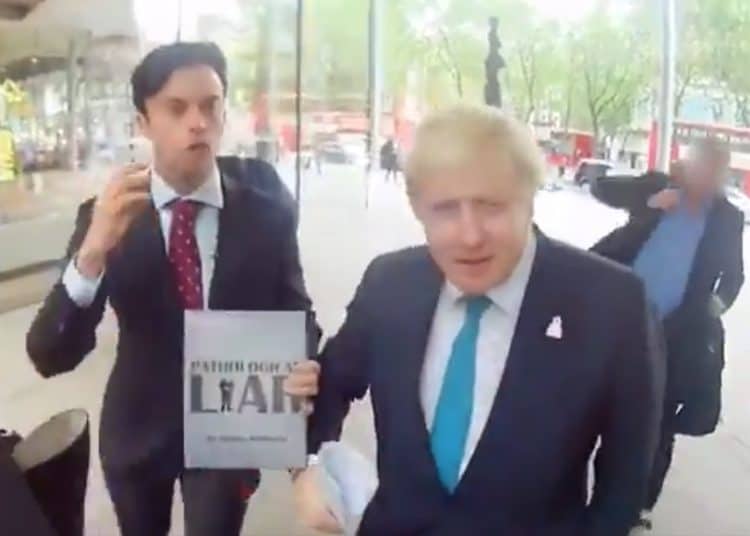 A clip of Boris Johnson being handed a self-titled book on pathological lying has resurfaced after Labour MP Dawn Butler was thrown out of the House of Commons for trying to face the issue head on this week.

Jolyon Rubinstein, creator of The Revolution Will Be Televised, was filmed trying to hand the prime minister the book in 2017 as part of a hilarious sketch.

The satirist confronted the PM asking: “Are you lying right now?

“I can never tell if you’re doing it or not”.

Woah – @JolyonRubs just took the lying issue straight to Boris Johnson’s face… and did not relent.

The PM’s reputation is getting permanently cemented in by the single word “liar” and there’s no escaping it.pic.twitter.com/jyV6jOrvUw

The clip has resurfaced after Dawn Butler was ejected from the House of Commons this week after she held Johnson to account for misleading Parliament.

In a passionate speech, the Labour MP for Brent said that Johnson had claimed that the UK has “severed the link between infection and serious disease” in the battle against Covid-19.

Asked by the deputy speaker to retract her accusation and correct the record, Butler said: “At the end of the day, the prime minister has lied to this house time and time again. It’s funny that in this place we get in trouble for calling out the lies, rather than the person lying.”

After again being told to withdraw her statement and “reflect on her words”, Butler continued: “I’ve reflected on my words. Somebody needs to tell the truth in this House – that the prime minister has lied.”

She was subsequently forced to leave the House of Commons, and suspended for the rest of the day.

Meanwhile, a petition to ‘make lying in parliament history’ is closing in on 150,000 signatures, with over 125,000 people signing at the time of writing.

The campaign, spearheaded by Rubinstein, notes:

“If I were to lie in a court of law, I would go to jail. But it’s entirely legal for an MP to lie to Parliament. Doesn’t sound right, does it?

“In order to gauge the support for stopping MPs from lying please sign the petition here and let’s start a public debate about how we can make politicians’ lies history.“