There were people “jumping over fans in wheelchairs”, adding: “It wasn’t human behaviour. You don’t expect people to behave like that.” 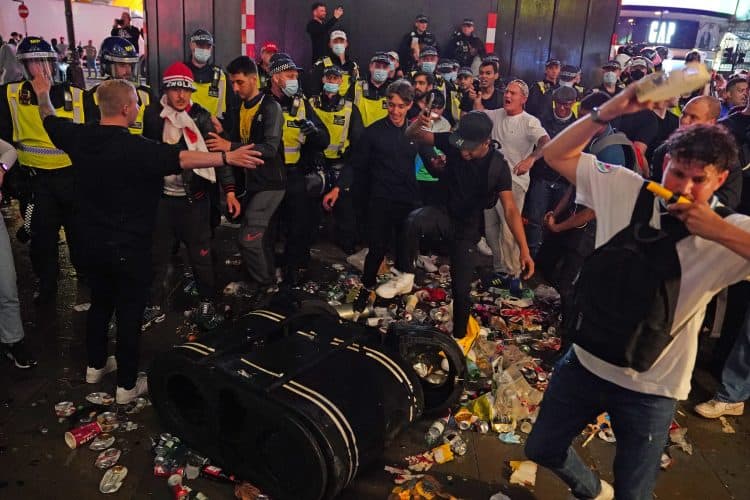 Ticketless fans targeted disabled supporters in a “predatory” way as they tried to get inside Wembley Stadium for the Euro 2020 final, a review has found.

One shocking incident saw a child in a wheelchair taken from his father in an effort by someone to trick their way inside for the eagerly-anticipated match.

The ticketless fan tried to impersonate a steward to get through a pass gate, a report by Baroness Casey into the events surrounding the July 11 England v Italy game revealed.

The child’s father, in testimony to campaigning sports charity Level Playing Field for the report, said the England fan had been wearing a high-visibility jacket in a bid to disguise himself as an official.

The father said: “He’s then taken [son’s] wheelchair and pushed it towards the door … Just as we got to the door we twigged what was going on and it turned out he’s just an England fan in a high-viz jacket that was literally hijacking a wheelchair to get into the stadium.”

It was just one example of how “ticketless fans targeted disabled supporters in a predatory fashion near the turnstiles” in behaviour described as disturbing.

In another instance the unnamed father of an England footballer described how there was “a wave of bodies just flung to the floor, including a young lad in a wheelchair – it was terrifying, disgraceful”.

The sports ground safety authority told how there were people “jumping over fans in wheelchairs”, adding: “It wasn’t human behaviour. You don’t expect people to behave like that.”

A ticketholder who complained to the Football Association (FA) said they “saw people in wheelchairs struggling to get through the mosh pits, wheeling over cans and bottles and God knows what else”.

Among its recommendations for the FA and Wembley ahead of future matches, the review stated that “particular attention should be made to ensuring those entering through gates provided for wheelchair users and other more vulnerable members of society are not endangered by the reckless actions of others”.