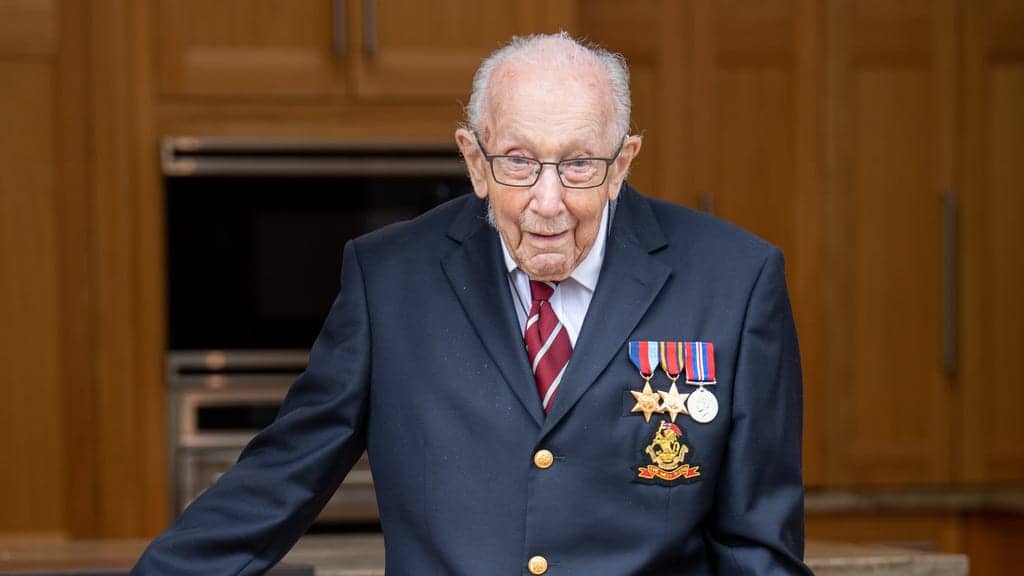 Captain Sir Tom Moore was a Second World War veteran who won the hearts of the British nation when he decided, aged 99, to walk 100 laps of his garden to help the NHS.

His determination captured the public imagination at the height of the coronavirus crisis and within days he had raised tens of millions of pounds.

The Queen’s first official engagement in person after lockdown lifted was to knight Sir Tom in a ceremony at Windsor Castle.

Prime Minister Boris Johnson said Sir Tom’s “heroic efforts have lifted the spirits of the entire nation”, the Duke of Cambridge praised him as a “one-man fundraising machine” and he even released a charity single.

His cover of You’ll Never Walk Alone, together with singer Michael Ball, reached number one in the charts, making him the oldest artist ever to have a UK number one single.

A flypast of a Spitfire and a Hurricane marked his 100th birthday, and he was made an honorary colonel.

Speaking about the flypast, Sir Tom said: “I’m one of the few people here who’ve seen Hurricanes and Spitfires flying past in anger. Fortunately today they’re all flying peacefully.”

He raised a total of £32.7 million, with donations from 1.5 million supporters, before his fundraising page was closed at midnight following his 100th birthday.

He started his challenge a little over three weeks earlier, and he encouraged people to continue to donate to NHS Charities Together.

Sir Tom rounded off 2020 with a trip to Barbados with his family, and his fundraising efforts were marked during the New Year drone display in London, as his figure appeared over the O2 Arena.

Sir Tom was born in Keighley, West Yorkshire, on April 30 1920. He attended Keighley Grammar School and later completed an apprenticeship as a civil engineer before joining the Army.

He enlisted into the eighth battalion of the Duke of Wellington’s Regiment (8 DWR), an infantry unit that was converted to operate Churchill tanks as part of the Royal Armoured Corps (RAC).

In 1940, he was selected for officer training and rose to the rank of captain, later being posted to 9 DWR in India.

He served and fought in the Arakan in western Burma, since renamed Rakhine State, and went with his regiment to Sumatra after the Japanese surrender.

After the war, he returned to the UK and worked as an instructor at the Armoured Fighting Vehicle School in Bovington, Dorset.

He previously made a foray into television when he appeared on gameshow Blankety Blank, hosted by Terry Wogan, in 1983.

He lived in Kent for many years before moving to Bedfordshire to be with his family in 2007.

Sir Tom suffered a broken hip in 2018 and also required treatment for skin cancer of the head.

His family said this inspired him to do something to help the NHS, and he decided to walk 100 laps of his garden in Marston Moretaine before his 100th birthday to raise funds.

Sir Tom started his challenge in early April 2020 with the initial target of raising £1,000 for NHS Charities Together.

Ten days later, assisted by his walking frame, he had completed 100 laps and raised more than £20 million.

“It really is absolutely enormous isn’t it?” he said at the time. “That sum of money is very difficult to imagine but it’s coming in so well.”

He vowed to keep on walking laps of the 25-metre circuit, and did so until his birthday.

A long list of celebrities praised Sir Tom’s efforts, including David Walliams, Sir Mo Farah, Lewis Hamilton and Gary Lineker, along with politicians and royals including Health Secretary Matt Hancock and the Duke of Sussex.

Sir Tom was the guest of honour at the opening of the NHS Nightingale Hospital Yorkshire and the Humber in Harrogate, set up to help with increased numbers of hospital admissions during the pandemic, and he appeared by video link.

So many people sent him cards to mark his 100th birthday that a dedicated sorting office was set up at his grandson’s school.

He was sent more than 140,000 birthday cards, including a signed card from the Queen.

A train was named after him, he was awarded the Freedom of the City of London, and the postbox outside his village Post Office was painted NHS blue in honour of his efforts.

Sir Tom, who was a cricket fan, was also made an honorary member of the England cricket team.

“The past three weeks have put a spring back in my step.

“I have renewed purpose and have thoroughly enjoyed every second of this exciting adventure.”

His daughter Hannah Ingram-Moore said on his 100th birthday: “I think we know that he has touched the hearts of many people around the world.

“He’s definitely engaged us all and given us hope and unity. So, there will be legacy.”

The Captain Tom Foundation was established by his family to “spread hope and ease loneliness”, and his Walk With Tom campaign had the same goal during England’s second lockdown in November 2020.

Sir Tom helped raise spirits during the coronavirus crisis, saying in one TV appearance: “To all those people who are finding it difficult at the moment: The sun will shine on you again, and the clouds will go away.”

His motto, which signed off many posts from his popular Twitter account, was “tomorrow will be a good day”.