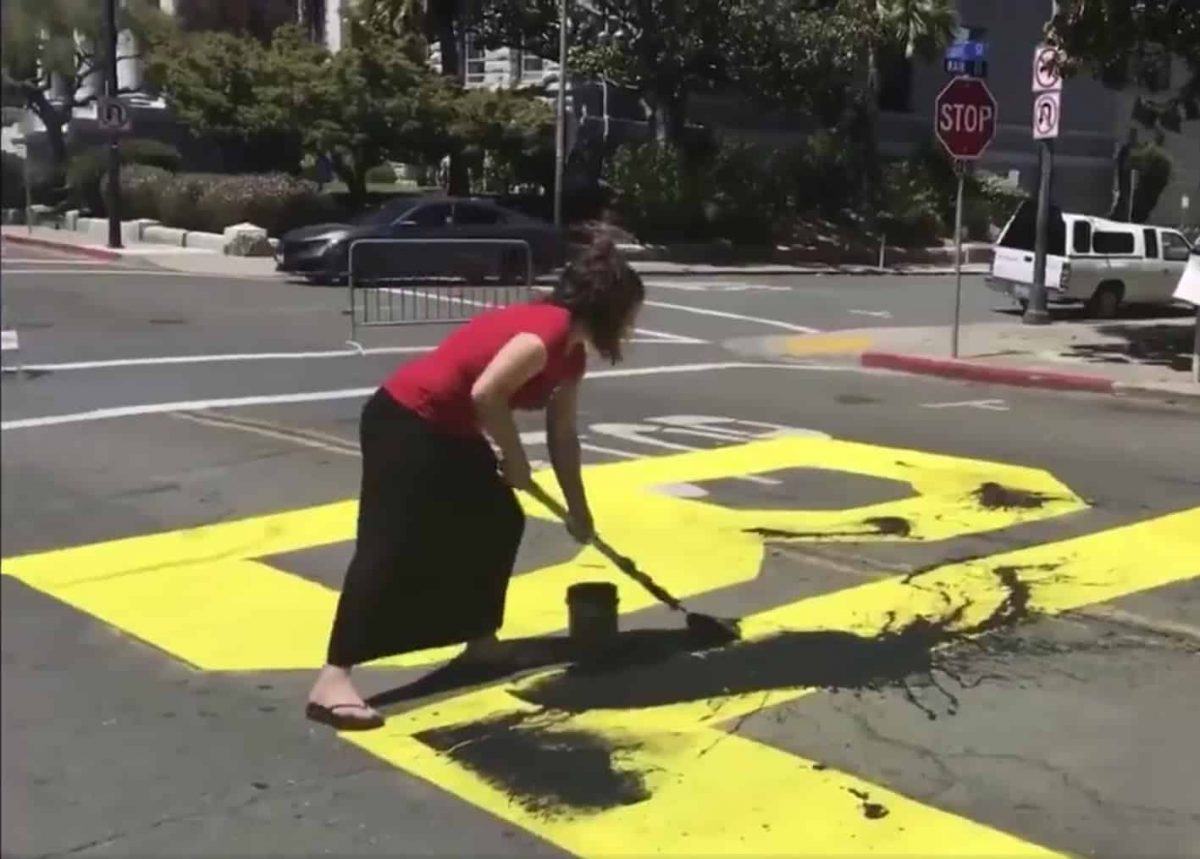 Police in California are searching for a White couple who painted over a Black Lives Matter mural less than an hour after it was finished – while claiming racism is a “leftist lie”.

Footage of the incident, which quickly went viral, showed a woman in flip-flops and a patriotic shirt rolling black paint over the bright yellow mural in Martinez, a small town northeast of San Fransisco.

The woman added: “Keep this shit in fucking New York. This is not happening in my town.”

Yooo!!! This Karen and Chad are defacing a #BlackLivesMatter mural in Martinez, CA. Twitter do your thing. pic.twitter.com/mtuTqtMT8A

Like the mural outside the White House that inspired it, Martinez’s BLM mural was sanctioned by the city – and volunteers had spent nearly seven hours working on it before the two unidentified vandals arrived.

The Martinez Police Department is now searching for the pair.

A number of BLM murals have been defaced across America, but residents in Martinez expressed their shock at how quickly their own iteration had been vandalised.

Justin Gomez, a Martinez resident who worked to obtain the permit for the painting, told The Washington Post: “I was shocked it was vandalised in broad daylight less than an hour after we finished it.

“It was just like, man, already? I think it speaks to the climate in our country.

“We’re seeing protestors getting run over by cars. We’re seeing people advocating for the movement being targeted in a very real and violent way. It felt like that was finally coming to our town.”

The following day, another man was arrested for aiming a gun on a person at the site of the mural. He had allegedly driven past in a Jeep shouting, “All lives matter,” before turning round and pulling the weapon out and pointing it at someone defending the art.

Social media users were quick to criticise the vandals, with many labelling the pro-Trump duo as a “Karen” and a “Chad” – terms that have come to symbolise certain types of White women and men.

Writing on Twitter, Keith Boykin – a Black CNN commentator – said of the pair of vandals: “The mere idea that America might care about Black people is too much for them.”

Representative Mike Thompson, a California Democrat, added: “Racism and bigotry have no place in our community.

“I am appalled that anyone would deface Martinez’s Black Lives Matter mural or threaten our community with violence. We must come together and stand against hate.”

Related: Trump tweets about plan for Black Lives Matter mural in front of his tower