Investigations into the renovations of the Prime Minister’s Downing Street flat lead many of Thursday’s front pages. 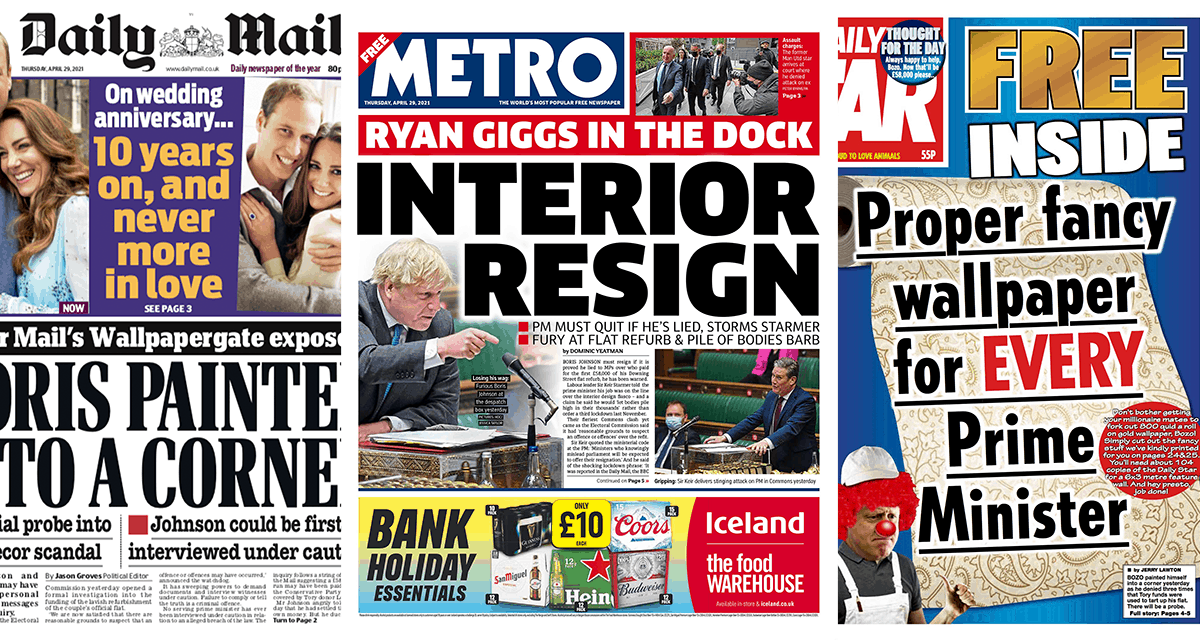 Prime Minister Boris Johnson being “painted into a corner” over the refurbishment of his Downing Street flat is among the stories making headlines on Thursday.

That headline features on the front of the Daily Mail, with the paper reporting that Mr Johnson and his fiancee Carrie Symonds may have to hand over emails and phone messages to an inquiry over the “lavish refurbishment”.

It comes amid a flurry of brutal front pages with Number 10 set on from “every possible” angle, Ian Dunt noted.

Brutal set of front pages for No.10 tomorrow, from every possible part of the political spectrum (via @hendopolis, obvs) pic.twitter.com/PTJGp7fYwe

This week’s New European features a pile of Boris Johnson’s with Dominic Cummings stood nearby.

The Guardian writes about the PM’s “fury” as the Electoral Commission launched an investigation which, the paper says, could “imperil Boris Johnson’s premiership”.

Downing Street are reportedly concerned about a paper trail left relating to a Tory donor funding the refurbishment, according to The Times.

The formal probes into the facelift lead the Financial Times, reporting on the Electoral Commission probe and another by Sir Christopher Geidt.

The second of these investigations, by the former Private Secretary to the Queen, leads The Independent and Daily Mirror with the second saying the PM has the “power to clear himself”.

Metro carries the headline “Interior resign” as Labour leader Sir Keir Starmer told the PM his job was on the line, the i leads on Mr Johnson giving evidence to the electoral watchdog while the Daily Star is offering “proper fancy wallpaper” to its readers.