After tens of thousands of Brits descended on the capital to march through central London to Westminster to demand the NHS is protected from cuts and privatisation this weekend, the US President rounded on the march to attack Democrats fighting him for universal healthcare for Americans. Donald Trump tweeted: “The Democrats are pushing for Universal […] 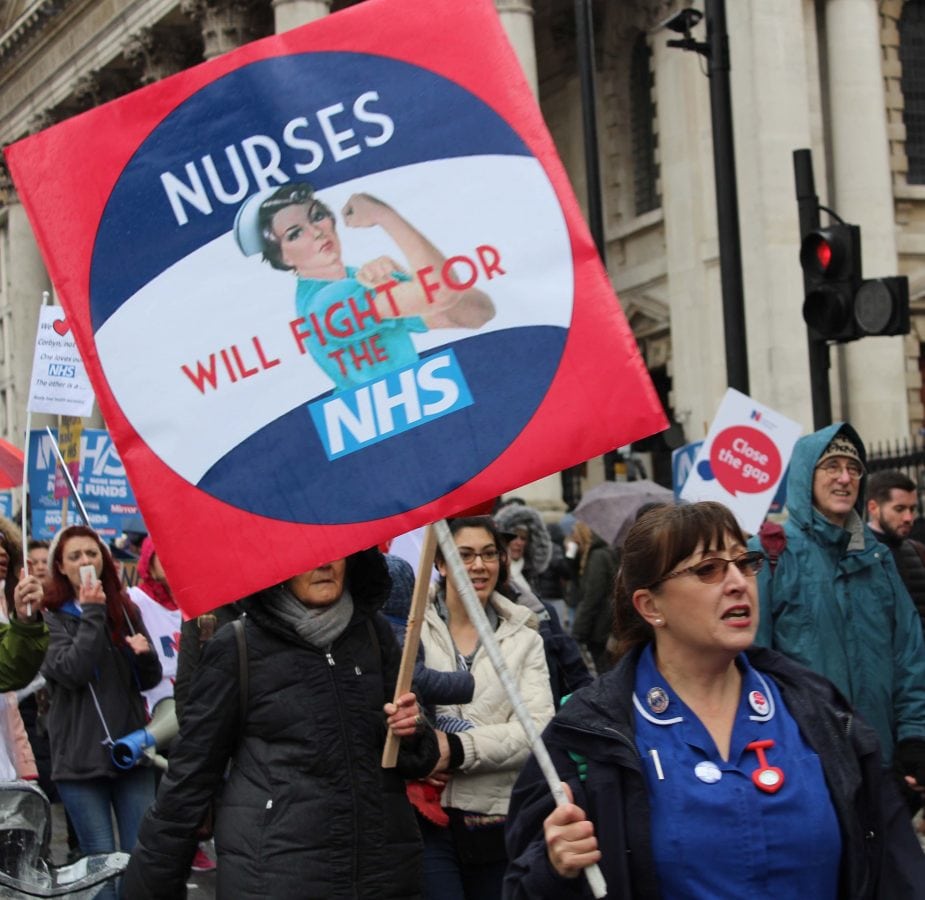 NHS nurses took to the streets to fight for the NHS

After tens of thousands of Brits descended on the capital to march through central London to Westminster to demand the NHS is protected from cuts and privatisation this weekend, the US President rounded on the march to attack Democrats fighting him for universal healthcare for Americans.

Donald Trump tweeted: “The Democrats are pushing for Universal HealthCare while thousands of people are marching in the UK because their U system is going broke and not working. Dems want to greatly raise taxes for really bad and non-personal medical care. No thanks!”

The Democrats are pushing for Universal HealthCare while thousands of people are marching in the UK because their U system is going broke and not working. Dems want to greatly raise taxes for really bad and non-personal medical care. No thanks!

As part of a post-Brexit trade deal with the US, the NHS is set to be opened for more opportunities for privatisation and contracts for US healthcare giants.

Meanwhile in the US Republicans and Democrats have been fighting over Donald Trump’s repeal of elements of President Obama’s healthcare reforms that provided Americans with the right to free healthcare through subsidised insurance schemes.

Trump has been against universal healthcare though has not as yet been able to offer any credible alternative scheme.

Brits were quick to react to defend their universal health care system the NHS – one that has been under threat from growing privatisation under successive governments, as well as a restructuring under the Conservatives that has cost billions and left many NHS trusts chronically underfunded.

People in the UK are quite defensive about their National Health Service as Donald Trump found out:

Donald Trump says the NHS is broken, & thousands march about it in the streets. But they were marching because they want to keep it as it is. Fake news. Sad.

People were marching because the govt is cutting funding to our health service to force privatisation. We DON’T want private companies running our health service – that’s what protest was about. Look it up before Tweeting verbal diarrhoea or would that exhaust your brain cell? pic.twitter.com/e43QY1j6Cn

Wrong. People were marching because we love our NHS and hate what the Tories are doing to it. Healthcare is a human right. https://t.co/Pmo2xYSqZh

Brits love the NHS and Trump denies millions of Americans decent health care. The ignorant turd’s guaranteed a big protest if he ever visits Britain https://t.co/1i01JB6KBu

I may disagree with claims made on that march but not ONE of them wants to live in a system where 28m people have no cover. NHS may have challenges but I’m proud to be from the country that invented universal coverage – where all get care no matter the size of their bank balance https://t.co/YJsKBAHsw7

– Though many were keen to point out that Hunt and his Conservative colleagues have been meeting with US private healthcare firms eyeing up the NHS for private contracts, – and some of which they have financial interests with.

I see. This is a good cop, bad cop acting out after the #FundOurNHS march which you had no response to whatsoever.