Documents identifying several Afghan staff and job applicants were found by a newspaper reporter at the abandoned facility. 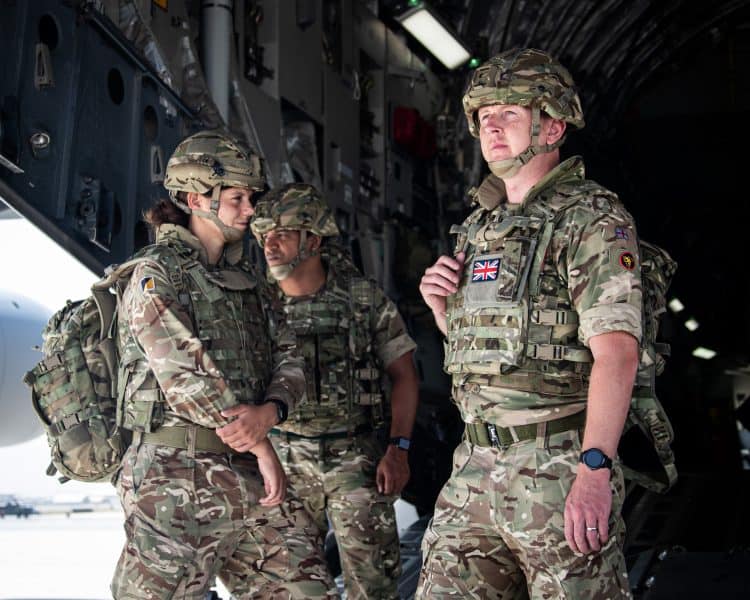 Handout photo issued by the Ministry of Defence (MoD) of 16 Air Assault Brigade arriving in Kabul as part of a 600-strong UK-force sent to assist with Operation PITTING to rescue British nationals in Afghanistan amidst the worsening security situation there. Issue date: Sunday August 15, 2021.

Foreign Office staff left documents with sensitive details of Afghans working for them – as well as the CVs of locals applying for jobs – scattered across the British embassy compound in Kabul.

A reporter for The Times discovered papers identifying seven Afghans on Tuesday, as Taliban fighters patrolled the embassy.

Phone calls to the numbers on the documents revealed that some Afghan employees – and their families – were still stranded on the wrong side of the Kabul airport perimeters as the evacuation scramble draws to a close.

Amid fears of Taliban reprisals for any locals who helped western interests in the country, the documents included the name and address of a senior embassy staff member, other staff members and their contact details, and the CVs and addresses of applicants for jobs as interpreters. Some applicants listed previous work for western countries.

The Foreign Affairs Select Committee is set to launch an inquiry into the debacle, which was uncovered by a journalist on Tuesday on a tour through the city’s abandoned diplomatic quarter while accompanied by a Taliban patrol.

How @FCDOGovUK handled this crisis will be the subject of a coming @CommonsForeign inquiry. The evidence is already coming in.https://t.co/3edJLkIZGe

The Times says it called the numbers listed and found some of the staff members had already been evacuated to the UK, but that other staff had been left behind.

Among those were three Afghan staff and eight family members, including five children, who were caught in crowds at Kabul airport unable to access the British-controlled section of the facility. They were, however, eventually found and rescued.

“The Foreign Office appeared to have lost these staff, and their evacuation only occurred after their details were passed on by The Times,” the newspaper reported.

The fate of at least two job applicants whose details were left on the ground at the embassy remains unknown.

The apparent blunder made as staff hastily abandoned the embassy as the Taliban reclaimed Kabul appeared to ignore evacuation protocols of shredding and destroying all data that could compromise local workers.

It also came after Foreign Secretary Dominic Raab rejected a request to speak with his Afghan counterpart about the evacuation of interpreters who worked for Britain two days before the fall of Kabul, while he was on holiday on Crete, The Times said.

The Foreign Commonwealth and Development Office (FCDO) has acknowledged the apparent error, but said staff had tried to destroy sensitive material before leaving the embassy.

“We have worked tirelessly to secure the safety of those who worked for us including getting three families to safety,” a FCDO spokesperson said.

“During the drawdown of our Embassy every effort was made to destroy sensitive material.”

Meanwhile, the parliamentary Foreign Affairs Select Committee will conduct an inquiry into the incident, according to its chairman, Conservative MP Tom Tugendhat.

Tugendhat said in a tweet: “How @FCDOGovUK handled this crisis will be the subject of a coming @CommonsForeign inquiry. The evidence is already coming in.”

An FCDO source added the Foreign Office was grateful to The Times for “sharing the information retrieved with us and working with us to enable us to get these three families to safety”.

Related: Tom Tugendhat: Kabul blasts are ‘what defeat looks like’

Ten things to do in London this weekend