“I was fighting for a cause I felt strongly about,” Roberts said. 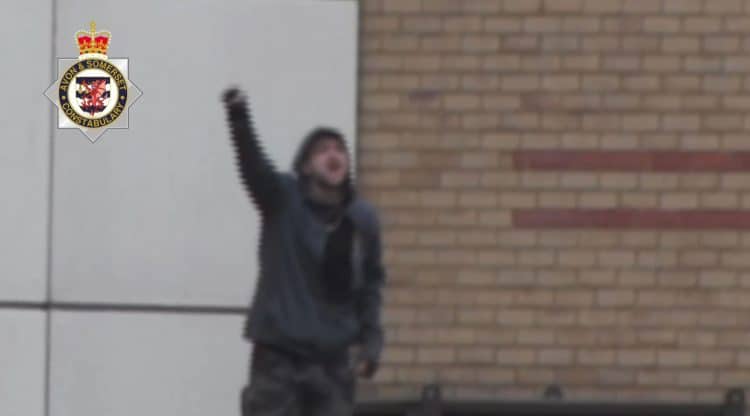 A protester who set fire to police vehicles during a riot that followed a “Kill the Bill” demonstration in Bristol has been jailed for 14 years.

Ryan Roberts led chants of “ACAB: All cops are bastards” outside a city centre police station on March 21 this year.

As the protest turned violent, Roberts threw cans, bottles and placards at officers, as well as verbally abusing and repeatedly kicking them.

The 25-year-old, who had taken cocaine and been drinking, then smashed the windows of the Bridewell police station on Bridwell Street.

Roberts was caught on film pushing pieces of flaming cardboard under two police vans and placing industrial bins around an already partially burnt-out police car and setting them alight.

He told an officer inside one of the vans he would “go bang”.

Roberts then smashed in the windows of a mobile police station and encouraged the crowd to help roll it over, before setting light to the cab while hundreds of people were close by.

Bristol Crown Court heard damage totalling over £200,000 was caused during the rioting that evening.

Giving evidence, Roberts said he got “carried away” fighting for freedom of speech during a protest against the Government’s Police, Crime, Sentencing and Courts Bill.

Roberts told the court the Bill aimed to “ban peaceful protest altogether”, saying the demo “was more about freedom of speech”.

He said the mood of the protest changed when police donned riot gear as night fell and officers started “pushing, shoving and hitting” the crowd with shields and batons.

“I was fighting for a cause I felt strongly about,” Roberts said.

More than 40 officers were injured in the riot, which died down in the early hours of March 22.

Two officers, who had served in the armed forces, described the night as the “most frightening incident in their careers”.

Another described the rioting as “ferocious, prolonged and determined violence”.

Nicholas Lewin, defending, said the defendant had recently been diagnosed with ADHD, had been proscribed medication and was not a “sophisticated criminal”.

“Mr Roberts is not a rampant fire starter, twisted or other,” he said.

“The issue of impulsive behaviour becomes more acute for someone who suffers from that condition.

“He is someone on the fringes of society who is perhaps not equipped to be fully integrated within it – I am trying not to be politically incorrect. He is not your average criminal.

“He is content for me to call him Mr Roberts. He has in fact adopted a they or them and adopted a different persona in prison.

“Custody for him will be considerably more difficult than it would be for somebody without his difficulties.”

Jailing Roberts, Judge James Patrick said: “You were actively involved in committing violence over a period of five hours.

“You were actively encouraging the crowd from an early stage and your actions encouraged the violence against police officers.

“You carried out a leading role in the encouraging of others in the setting of other fires.”