“It is deeply concerning that the United Kingdom is now seeking to unilaterally discard the Northern Ireland Protocol,” Ms Pelosi said. 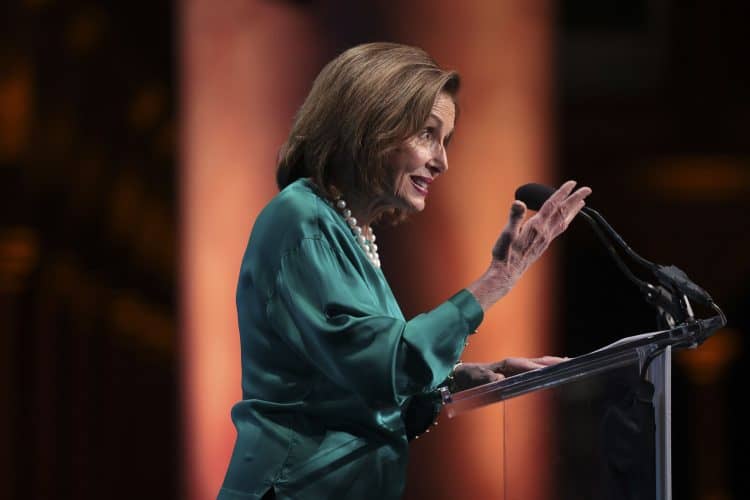 An intervention by US Speaker Nancy Pelosi in a row over the Northern Ireland Protocol has been slammed by the DUP leader as “unhelpful”.

Ms Pelosi said the US Congress will not support a free trade agreement with the UK if the Government persists with “deeply concerning” plans to “unilaterally discard” the protocol.

In a strongly-worded intervention, Ms Pelosi urged the UK and the EU to continue negotiations on the post-Brexit trade arrangements to uphold peace in the region.

The congresswoman said in a statement: “The Good Friday Accords are the bedrock of peace in Northern Ireland and a beacon of hope for the entire world.

“Ensuring there remains no physical border between the Irish Republic and Northern Ireland is absolutely necessary for upholding this landmark agreement, which has transformed Northern Ireland.”

The comments from Ms Pelosi are a reminder of the ongoing interest in Northern Ireland at the highest levels in Washington, amid political instability following the Assembly election.

The Democratic Unionist Party (DUP) is currently blocking the re-establishment of Stormont’s power-sharing institutions in protest at the protocol, which has created economic barriers on trade between Great Britain and Northern Ireland.

“I noted that Speaker Pelosi talked about the lack of bipartisan approach or agreement on what the UK government are doing,” he said.

“You cannot have powersharing without consensus in Northern Ireland so the bipartisanship or the consensus that is required is not won in the US congress, it’s won in the Northern Ireland Assembly and I would urge Speaker Pelosi to understand that because I think that her contributions are entirely unhelpful, offer no solution, offer no help and merely repeat a mantra that frankly is hopelessly out of date.”

The Traditional Unionist Voice party in Northern Ireland was also critical of Ms Pelosi, adding “the interference of foreign figures in what are internal UK matters is unwelcome and inappropriate”.

TUV representative Stephen Cooper also said Irish premier Micheal Martin, who met the Stormont parties in Belfast on Friday, “has no business lecturing Unionists on what they can and cannot do”.

“His belligerent meddling should be met with the contempt it deserves and frankly Unionists should not even be meeting him,” he said.

This week, Foreign Secretary Liz Truss announced plans to legislate to override parts of the Brexit withdrawal treaty the UK struck with the EU.

“It is deeply concerning that the United Kingdom is now seeking to unilaterally discard the Northern Ireland Protocol,” Ms Pelosi said.

“Negotiated agreements like the Protocol preserve the important progress and stability forged by the Good Friday Accords, which continue to enjoy strong bipartisan and bicameral support in the United States Congress.

“As I have stated in my conversations with the Prime Minister, the Foreign Secretary and members of the House of Commons, if the United Kingdom chooses to undermine the Good Friday Accords, the Congress cannot and will not support a bilateral free trade agreement with the United Kingdom.

“Respectful of the will of the British people and of Brexit, I urge constructive, collaborative and good-faith negotiations to implement an agreement that upholds peace.

“The children of Northern Ireland, who have never known the bloody conflict and do not want to go back, deserve a future free of the violence where all may reach their fulfilment.”

Asked about Ms Pelosi’s comments, a No 10 spokesman said: “We welcome that the US shares our deep commitment to the Belfast Good Friday Agreement and the peace process and has urged the EU to show flexibility.”

Related: UK faces food shortages as up to 75% of seasonal worker roles unfilled – even Mail admits Brexit a factor