"..the goalposts continuously seem to change from the perspective of David Frost’s negotiation strategy and I think now that we’re seeing the goalposts shift once more." 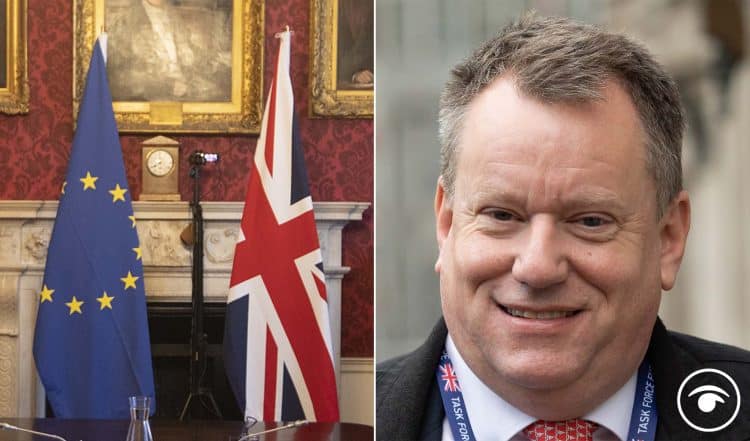 Sinn Fein has accused the UK Government of shifting the goalposts by demanding the removal of the European Court of Justice’s (ECJ) role in the Northern Ireland Protocol.

Declan Kearney questioned whether the Government was throwing a “dead cat” on the negotiating table because the EU was about to “call their bluff” by tabling proposals that would resolve the practical difficulties with Irish Sea trade.

The EU will outline what it has described as “far-reaching proposals” on Wednesday in a bid to resolve issues with the protocol.

Brexit negotiator Lord Frost has said the ECJ’s oversight role in arbitrating over any future UK/EU disagreements on the Protocol must be removed if both sides are to resolve the stand-off over the contentious post-Brexit trading arrangement.

Critics of the UK Government claim it is now raising a new fresh red line when engagement to date has been focused on reducing everyday checks and processes on goods moving from Great Britain to Northern Ireland.

Mr Kearney, a Sinn Fein junior minister at Stormont, told BBC Radio Ulster: “The problem throughout, and particularly over the last nine to 10 months, is that as we have attempted to double down and deal with these issues the goalposts continuously seem to change from the perspective of David Frost’s negotiation strategy and I think now that we’re seeing the goalposts shift once more.

“I think it can be read potentially one of two ways.

“This may well be a negotiation tactic. We’re now approaching the point where hopefully all of these issues can be successfully covered off and we can in fact see all the difficulties with the protocol eliminated and David Frost is simply trying to up the ante and bring some more heat into the talks process that will follow publication of the European Union proposals.

“However, there is another scenario. And that is they are at this point in time, that is David Frost and the Tory Government, finding that their bluff has finally been called and the European Union is indeed determined to bring forward substantive proposals on all of these areas – medicines, agri-food, customs, and governance – that will in fact bring certainty, simplicity and stability for our business sector here in the north and across the island economy and they’re running scared from that.

“Hence, the dead cat of the European Court of Justice being thrown onto the table.”

Mr Kearney said it would be a “disaster” if the UK Government walked away from the protocol.

Sir Jeffrey said he understood why the Government had concerns over the ECJ.

He insisted it was not a new issue and had been flagged in the Government’s Command Paper on the protocol published in the summer.

The DUP leader however declined to be drawn when pressed whether the issue would be a “red line” for his party.

He said he would not judge the EU proposals until he had sight of them, insisting his priority was the removal of the Irish Sea border.

“We do recognise that there are genuine issues around the governance of arrangements and I think that the UK Government has a point when it says that is unfair that in arbitration on disputes between the UK and the EU it is the EU’s court that is the final arbiter,” he told BBC Radio Ulster.

“I think in any dispute resolution process it’s very rare that you get one side having the final say on arbitration.

“Surely what is needed is some form of independent arbitration process. I think that’s what the UK Government are pressing for, so it’s important.

“I understand the point the UK Government are making here. I think it’s important that we don’t just get a short-term fix for these problems, but that we look at the long-term issues as well, so that we settle this matter once and for all.”