He has condemned “mindless idiots” who placed one of his election posters with a noose around the neck. 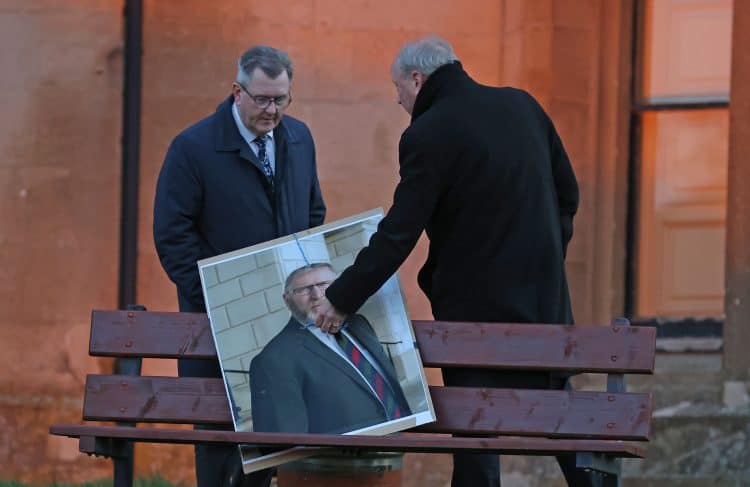 Ulster Unionist leader Doug Beattie has condemned “mindless idiots” who placed one of his election posters with a noose around the neck outside a rally against the Northern Ireland Protocol in Co Armagh.

The poster was removed from a bench in Lurgan on Friday evening by fellow unionist leaders Sir Jeffrey Donaldson of the DUP and Jim Allister of the TUV.

Mr Beattie also hit out at one of the speakers at the event who referred to him as a “traitor”.

The UUP leader, who has refused to attend the rallies claiming that they are raising tensions, told the PA news agency he would “not be bullied, intimidated or distracted”.

A series of rallies have been taking place across Northern Ireland outlining unionist and loyalist opposition to the post-Brexit protocol which sees additional checks on goods arriving into Northern Ireland from Great Britain.

It is strongly opposed by unionists as a border in the Irish Sea.

Mr Beattie announced he would not attend the events after a security alert halted a peace-building event in north Belfast which Irish Foreign Affairs minister Simon Coveney had been addressing last month.

Since then, his constituency office in Portadown was attacked when the front window was smashed by a brick.

Reacting to Friday night’s events, Mr Beattie said: “It is a poster and some mindless idiots have put a noose around my neck on it – they are not reflective of the vast majority of people who were there.

“A poster can go in the bin, a window can be replaced,

“My concern for the people of Northern Ireland remains. Nothing has changed.”

Mr Beattie, an Army veteran who has been decorated with the Military Cross, said he was disappointed at being branded a “traitor” by a speaker at the event.

He said: “That is where my main disappointment is, in being called a Lundy and a traitor when I’m clearly not.

“I am a unionist who supports the union, who will do everything I possibly can for the people of that union.

“I will neither be bullied nor intimidated nor distracted from the path that I believe is the right path for the people of Northern Ireland, so nothing has changed whatsoever.”

He added: “Those who called me a Lundy and traitor or put a double-knotted noose around my neck on a poster are not the people who stood beside me in battle.

“They are not the people who I served alongside who were some of the finest men and women who have ever donned the Queen’s uniform, as we literally bled blood, sweat and tears in the heat of battle, in the service of our country.

“A minority shout the loudest and make a lot of noise as they seek to raise temperatures and create instability in Northern Ireland, but I believe the silent majority in Northern Ireland will want no truck with those comments and will despair at the type of leadership it represents for unionism.”

Mr Beattie added: “I don’t blame the vast majority of people who were there.

“The people who did it are the ones to blame, they are the ones who have to answer the questions and we should not lay blame at the feet of others when it was mindless individuals who did it.

“It (the poster) was taken down, it went in the bin, as far as I am concerned that is it.”

Mr Allister said he removed the poster of Mr Beattie from view because he felt its presentation, whether intentional or inadvertent, was “entirely inappropriate”.

He said that if someone placed it to “convey malevolence”, that “they were idiots”.

Sir Jeffrey told the rally that his message to the event was one of unionists working together.

“Unionism is fully entitled to express its unequivocal opposition to the protocol in a public and peaceful way.

“The protocol has undemocratically altered Northern Ireland’s constitutional position and dealt a hammer blow to prosperity in all corners of our province.

“Not a single unionist representative supports the Irish Sea border.”