“Brexit and its consequences are news all over the globe because what is happening in the UK isn’t happening there," one Twitter user said. 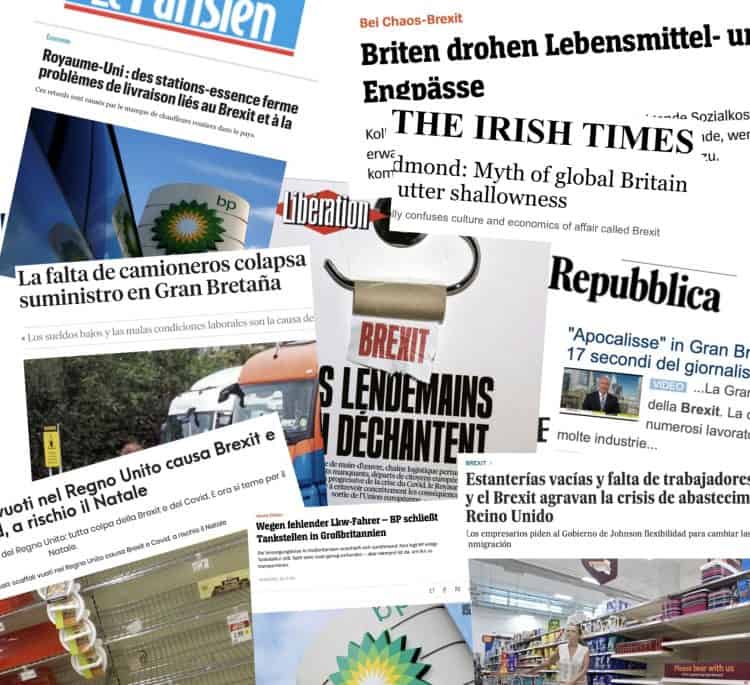 Newspapers throughout Europe are talking about UK shortages and Brexit.

Referencing shortages that plagued Britain in the 1970s, eventually leading to the arrival of Margaret Thatcher’s neoliberalism, the newspaper said Britain is returning to the days when it was “not uncommon to make excuses for breach of contract.”

Also in Spain, La Vanguardia talks about KFC struggling to find chickens and having to close branches and McDonald’s not serving milkshakes and soft drinks.

It continues highlighting medicines are expiring before even arriving in British hospitals and pharmacies, fruits and vegetables are rotting in the fields, pubs are finding it hard to get hold of beer and water bottles are “evaporating”.

“In many many shops and supermarkets there isn’t milk, and the image of empty shelves has become usual, as if it were a boycotted Cuba,” the paper reported earlier this month.

And Le Parisien reported yesterday that gas stations run by UK’s BP and US rival ExxonMobil have closed in the UK due to fuel shortages caused by a lack of delivery drivers.

In a statement received by AFP, BP admits that it is “suffering from petrol supply problems at some sales sites in the United Kingdom”, caused by “delivery delays due to the lack of truck drivers across the UK”.

‘No one to transport fuel’

In Germany, Der Spiegel also reported yesterday about petrol shortagres, saying: “There would be enough fuel available – but nobody is there to transport it”.

And last month, Dissapore reported Brexit and Covid are putting Christmas at risk.

​​”London, Manchester, Cambridge, Birmingham: In all these cities there is a supply crisis that is hitting supermarkets and fast food,” the publication’s article read.

‘UK is in serious trouble’

Europe’s reporting of post-Brexit Britain sparked many reactions – with one user saying: “Brexit and its consequences are news all over the globe because what is happening in the UK isn’t happening there.

“Regardless of what the UK government says, the UK is in serious trouble.”

James Taylor said they must be “jealous” as there is no room for food in the UK because “our shelves are stacked full of sovereignty”.

And Paul Niland said: “Note. All of these countries also have Covid to deal with. Also note. The list of upsides contains nothing more than slogans.”