"In a nutshell the Brexit Batalion is a snapshot of today’s elites, supping with their enablers, whilst scheming to engineer a narrative that continues to serve them best." 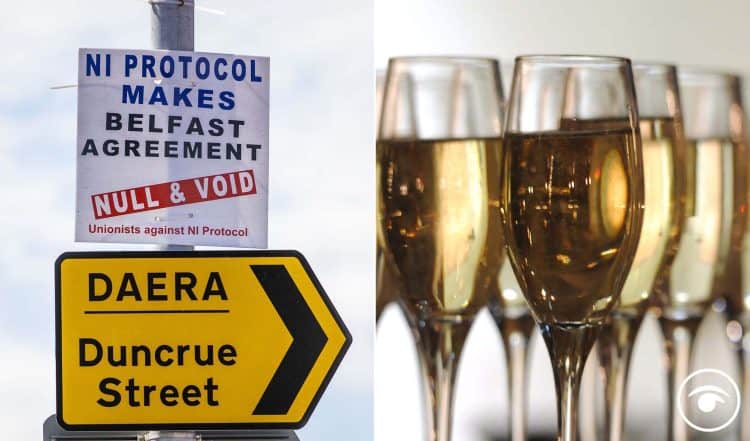 Back in Jan 2020 a dinner was held at Brown’s Hotel in London, organised by Allison Pearson. It seems to have been a splendid evening of champagne and ‘uplifting speeches.’

Fast forward to today and a former senior civil servant in charge of Brexit planning has warned some British businesses may “give up importing” as a result of new rules implemented in the new year.

Philip Rycroft, who was permanent secretary at the Department for Exiting the European Union (DExEU) between 2017 and 2019, said the changes that came into play on January 1 will cause “teething problems”, with some sectors hit harder than others.

The news comes as Boris Johnson vowed to “maximise the benefits of Brexit” in 2022.

Also the DUP have said there will be “major implications” at Stormont if the Foreign Secretary fails to swiftly set a formal deadline to end negotiations with Brussels over the Northern Ireland Protocol.

Days after the EU’s chief negotiator Maros Sefcovic claimed “London has breached a great deal of trust” with Europe over the protocol, DUP leader Sir Jeffrey Donaldson said Liz Truss needed to provide a “clear date” for ending the talks.

Brexit hasn’t turned out how we were promised, most would agree.

A Twitter user, Winston Smith, decided to look into the people who attended this infamous meeting and see who the guests were and how, in his opinion, they interlink and have pushed the Brexit narrative, in an almost coordinated effort.

His research is very interesting and I am sure you would like to know who was there and why?

Here is Allison appearing to refer to the dinner or maybe there were days of mass celebrations behind closed doors.

“When I first heard about this I was intrigued to see who had been invited. Some of the names we’re familiar to me, but many of them were not. I’ve been meaning to look into this for some time. Now I have. Let me share with you what I’ve found out.”

“As that Orwell bloke pointed out, if you want to control a population, it helps to control the narrative. If all we see & hear, from multiple sources, is the same information, then it can only reinforce the feeling that “it must be right” & a majority will go along with it.”

“I suspected that, on top of their billionaire bosses interests, there may be other forces at play. It was clearly the case that some media influencers were already active in 55 Tufton Street but also with US “Think Tanks”: Heritage, ATLAS, Cato Institute, TPA etc. I wondered if..

“..they might also work for the UK versions of US think tanks, which have been so successful at delivering legislation for the rich in the USA and are busy shaping policy as charities in the UK. The Charities Commission decides on their status. Meet guest no.50, William Shawcross.”

“William is a former Charities Commissioner. These lobbyist think tanks, sorry, charities, were formed on his watch. His wife is guest no.45, Olga Polizzi, a Tory councillor on Westminster Council & sister of guest No.12, billionaire donor Sir Rocco Forte of hotel fame. Eleanor..

“.. is their daughter. Eleanor Shawcross (Oxford) ran Johnson’s mayoral campaign. Eleanor is married to Lord Simon Wolfson, Next CEO & Tory donor, the son of Conservative life peer David Wolfson of Sunningdale. They also advised George Osborne in no.11 & later in the City.”

“In July 2020 Eleanor was nominated as a NED on the Board of the Sec of State & Dept for Work & Pensions, responsible for setting policy. So, no direct link to think tanks there, but the revolving door between donors, the City & the Government is alive & well for family members.”

“Let’s start with the organiser, Allison Pearson, who has written for every RW paper there is. She is also on the Advisory Council of the Free Speech Union set up by the infamous Toby Young. Also on the FSU is Radomir Tylecote of the notoriously dark money IEA & Eric Kaufmann.”

“Fellow IEA member & guest no.1 Kate Andrews, Associate Director at the IEA & Economics Editor at The Spectator. Also HO Comms at the Adam Smith Institute. The IEA also claims that Telegraph columnist, guest no.15, Madeline Grant is an IEA Editorial Manager. Nothing to see here.”

“Guest no.6 is Janet Daley of the Daily Mail who is also to be found moonlighting at the Centre for Policy Studies yet another RW think tank, where she’s in the company of unHerd’s Tim Montgomerie, guest no.34, & also Harriet Sergeant, guest no.51. More dark money in play.”

“Tim also founded ConservativeHome website with Jonathan Isaby, guest no.24; Jonathan has his very own RW think tank, Politiea, where he is listed as a Director. Politiea is ancient Greek word meaning City State, which seems appropriate for the course we’ve been embarked upon.”

“I’ve mapped out all the links in the public domain in the image below (there are too many to list in a thread). In a nutshell the Brexit Batallion is a snapshot of today’s elites, supping with their enablers, whilst scheming to engineer a narrative that continues to serve them best.”

“I mentioned that I’d return to the Catholic Church. Charles Moore converted to Catholicism when the CofE decided to ordain females. It was clearly a step too far for him. He’s one of those rare people who ticks every box: religious, rich, DT, titled, climate denier, regressive.”

“Baron Moore of Etchingham started working at the Spectator when it was owned by John “Algy” Cluff, owner of Cluff Resources, which specialised in support activities to the Oil & Gas industry. Moore is a Trustee at the Global Warming Policy Foundation (55 Tufton St)..”

“Criticised for its bias & flagrant misinformation, GWPF was forced to create a non-charitable subsidiary, Global Warming Policy Forum, to continue the #Gaslighting. (A major donor is Michael Hintze whose dodgy advisor Oliver Hylton caused Liam Fox to resign as Sec for Defence.)”

“Finally, Moore is a former Chairman of the Policy Exchange think tank & is now listed on their website as being a visiting academic. Various articles talk about Britain’s new place on the world stage, a major maritime force etc. Lots of wishful thinking by avid Brexit believers.”

“Moore is also Founder-Chairman of the Rectory Society & patron of the Latin Mass Society, which is literally trying to make Catholic mass available in Latin. On that regressive note, I think we’ll move on from Baron Moore of Etchingham, enobled by Johnson, a former DT columnist.”

“This collection of professionals is literally conspiring to stop any progressive activity that they or their bosses disagree with, from gender equality to taxing the hydrocarbon industry. So far they’re winning.”

Related: Reactions as Allison Pearson writes in Telegraph ‘It’s time for humanity to prevail over scientists’