Foreign Secretary Boris Johnson has leapt to the defence of his Government’s new appointment to its universities watchdog as other prominent Tories have defended Toby Young too despite his appalling comments about working class students and women. “Ridiculous outcry over Toby Young. He will bring independence, rigour and caustic wit. Ideal man for job,” tweeted […]

Foreign Secretary Boris Johnson has leapt to the defence of his Government’s new appointment to its universities watchdog as other prominent Tories have defended Toby Young too despite his appalling comments about working class students and women.

Perhaps this is an example of Toby Young’s “rigour and caustic wit’:

According to the Department for Education guidelines for Toby Young’s role, the post holder should uphold the “principles of public life”, including “integrity, accountability and leadership

After his appalling remarks about eugenics and working class students emerged, as well as an appalling sense of entitlement to publicly post comments about women’s breasts – even MP’s – the champion of non council-run Free Schools set about deleting the vast majority of his 56,000 tweets this week.

Unfortunately for the commentator who always claimed to champion free speech, much of it has been aimed against him this week as he was too late to stop some of his more appalling comments emerging.

this homophobic slur on a TV celeb: 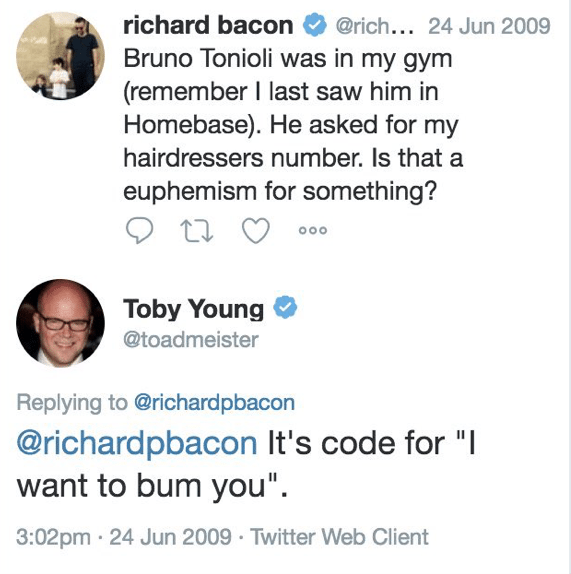 and plenty of examples of the appalling way Young seems to feel entitled to talk about women and their bodies – even if they are minors: 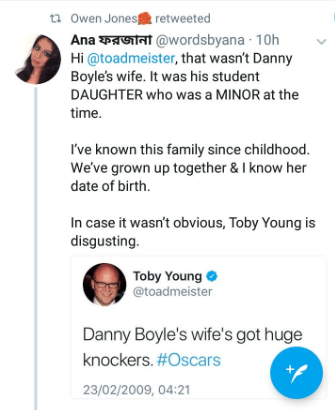 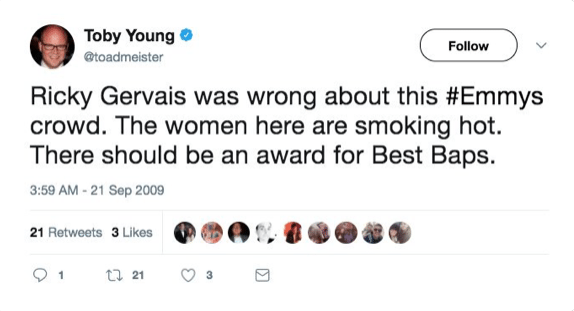 as Labour’s Shadow Minister for Women and Equalities Dawn Butler took pains to point out: 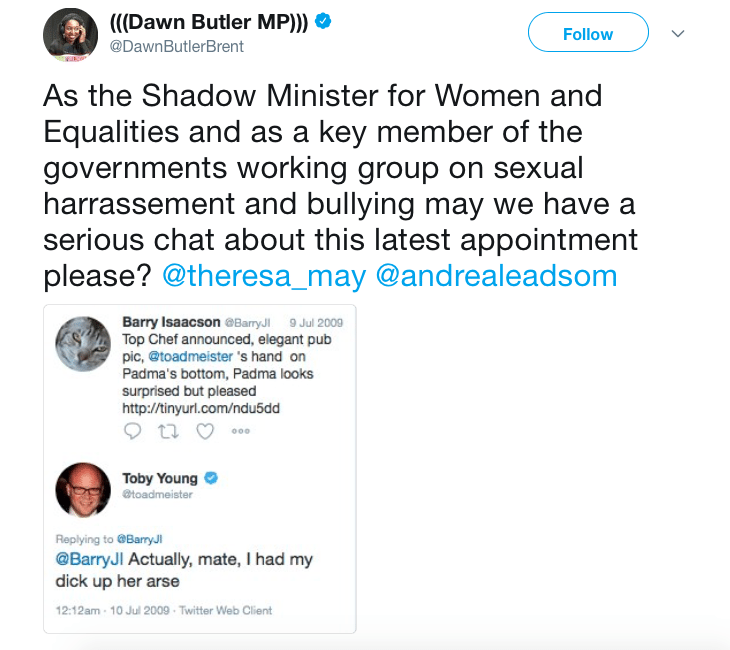 Figures in education joined Labour politicians to point out just how inappropriate the Government’s education watchdog appointment was. Especially in the light of these sick comments – that will appall anyone with a disabled child – written in the Spectator on inclusion for schools:

“Inclusive. It’s one of those ghastly, politically correct words that have survived the demise of New Labour. Schools have got to be ‘inclusive’ these days. That means wheelchair ramps, the complete works of Alice Walker in the school library (though no Mark Twain) and a Special Educational Needs Department that can cope with everything from dyslexia to Münchausen syndrome by proxy. If [then education secretary, Michael] Gove is serious about wanting to bring back O-levels, the government will have to repeal the Equalities Act because any exam that isn’t ‘accessible’ to a functionally illiterate troglodyte with a mental age of six will be judged to be ‘elitist’ and therefore forbidden by Harman’s Law.”

And these comments in Australian publication The Quadrant on offering genetic engineering for extra intelligence the future for poor people:

“My proposal is this: once this technology becomes available, why not offer it free of charge to parents on low incomes with below-average IQs? Provided there is sufficient take-up, it could help to address the problem of flat-lining inter-generational social mobility and serve as a counterweight to the tendency for the meritocratic elite to become a hereditary elite. It might make all the difference when it comes to the long-term sustainability of advanced meritocratic societies.”

And this very revealing comment on working class students being able to study at Oxford University from one of his books: “all Harold Wilson’s children had been let in at the gate… Small, vaguely deformed undergraduates would scuttle across the quad as if carrying mobile homes on their backs. Replete with acne and anoraks, they would peer up through thick pebble-glasses, pausing only to blow their noses.”

As Michael Gove and Priti Patel joined prominent Tories defending the appointment by Education Secretary Justine Greening, Jess Phillips, the MP who chairs the women’s parliamentary Labour party, warned: “How would Theresa May feel and look when inevitably every ill thought out word about poor people, women, lesbians and people without education is read out to her in parliament? It is not a good look.”