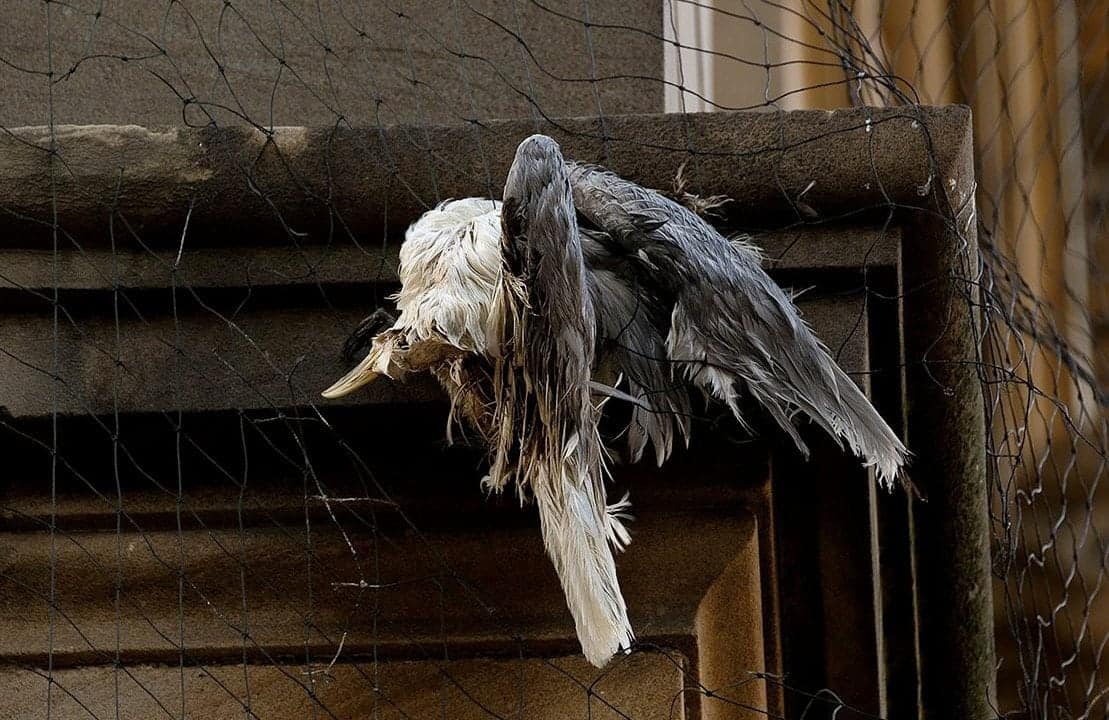 Bird lovers have flocked to criticise controversial nets which appear to be trapping endangered seabirds.

The black netting was put up on the front of historic buildings on the Quayside in Newcastle-upon-Tyne to discourage birds from nesting.

But they have already claimed their first victim after a dead kittiwake got stuck.

A picture taken by wildlife photographer Alan Hewitt appears to show the bird became trapped and had been unable to fly away.

Alan, 42, said: “I was making a film about the urban kittiwakes on the Quayside when I spotted what looked like a corpse in the net.

“The concern is that this is happening quite early in the breeding season – when the chicks are fledging they are bound to get caught up.

“I understand they can make a bit of a mess, but the way I see it, if we can clear up the mess you get in Newcastle city centre on a Friday or Saturday night, I don’t see why we can’t clean up after this endangered, world-record breaking population of kittiwakes.”

The kittiwake gulls usually nest and breed on the coast however there are around 800 breeding pairs which inhabit the Tyne Bridge during the summer.

They are thought to be the only ones in the world which set up home as far as 13km away from the sea, feeding as far away as the Farne Islands.

Alan took to Twitter to share his sadness at seeing the dead bird, and wrote: “Buildings on Newcastle’s quayside are covered with nets to discourage Kittiwake nesting. But what would you rather see from your window? A #RSPB red listed species with a chick, or this? We have a disconnect with nature @ChrisGPackham @IoloWilliams2 @urbanbirder @NEE_Naturalist.”

Hundreds of people retweeted and replied to his tweet, sharing their anger.

Wendy Dennis said: “Someone needs to remind Newcastle of the Kittiwakes’ status. People would rather see live beautiful birds, not tragic, sad sights like this.”

Carol Anne Grayson added: “So sad to see, for years they have nested along the quayside.”

A spokesperson for the Newcastle RSPB group said: “Kittiwakes are a threatened, red-listed bird.

“Here in Newcastle we have the most in-land breeding colony of Kittiwakes anywhere in the world.

“Yet the buildings they nest on keep getting covered in spikes and nets.

“Not only does this stop them breeding, it can kill them.

“These aren’t big, aggressive gulls. They won’t steal your chips or attack young children for a Greggs sausage roll.

“They are lovely, delicate sea birds that should be celebrated and cherished.”

The RSPB’s red list includes the most endangered bird species, which the charity says need “urgent action” to protect due to severe population decline.

In 2016, hotel group Gainford Hotels requested permission to install nets, sill plates and an Avishock system, which discourages birds from nesting, on the bridge itself.

But Newcastle City Council, which owns the tower, refused to allow the devices to be installed and the group withdrew its application after public outcry.