Banksy artworks discovered on side of damaged building in Ukraine

The anonymous graffiti artist has posted a photo of a mural he has created in the Ukrainian town of Borodyanka. 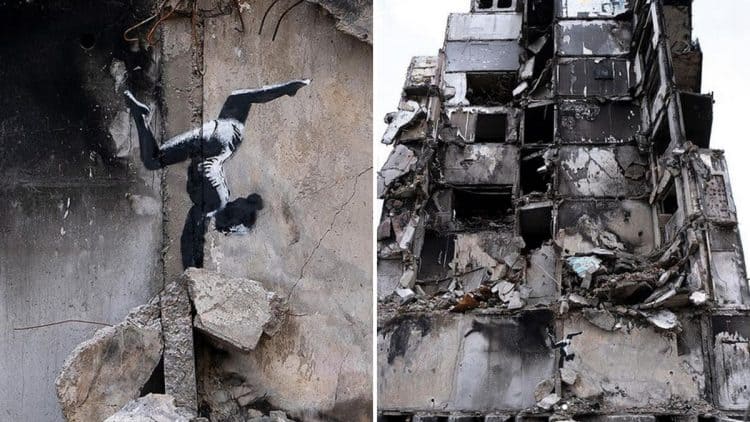 Banksy has appeared to confirm that he is in Ukraine after unveiling his latest artwork on Instagram.

Speculation had been mounting that the anonymous graffiti artist was in the war-torn country after a series of murals appeared in the town of Borodyanka, near Kyiv.

One mural depicted a man resembling Russian President Vladimir Putin being flipped during a judo match with a little boy.

Another showed two children using a metal tank trap as a seesaw.

However, the mural which Banksy chose to reveal his presence in the country is of a female gymnast balancing on a damaged building.

The graffiti artist posted three images of the mural on Instagram on Friday, with the caption simply reading “Borodyanka, Ukraine.”

Borodyanka, located north west of the capital, was one of the towns hardest hit by Russia’s bombardment at the beginning of the invasion.

Russian soldiers invaded in February of this year, occupying the town for weeks before it was liberated in April.

Since then, the town has been the focus of reconstruction efforts, with several tower blocks demolished as a result of damage caused by the fighting.

Gove refuses to apologise for Johnson’s unlawful suspension of Parliament