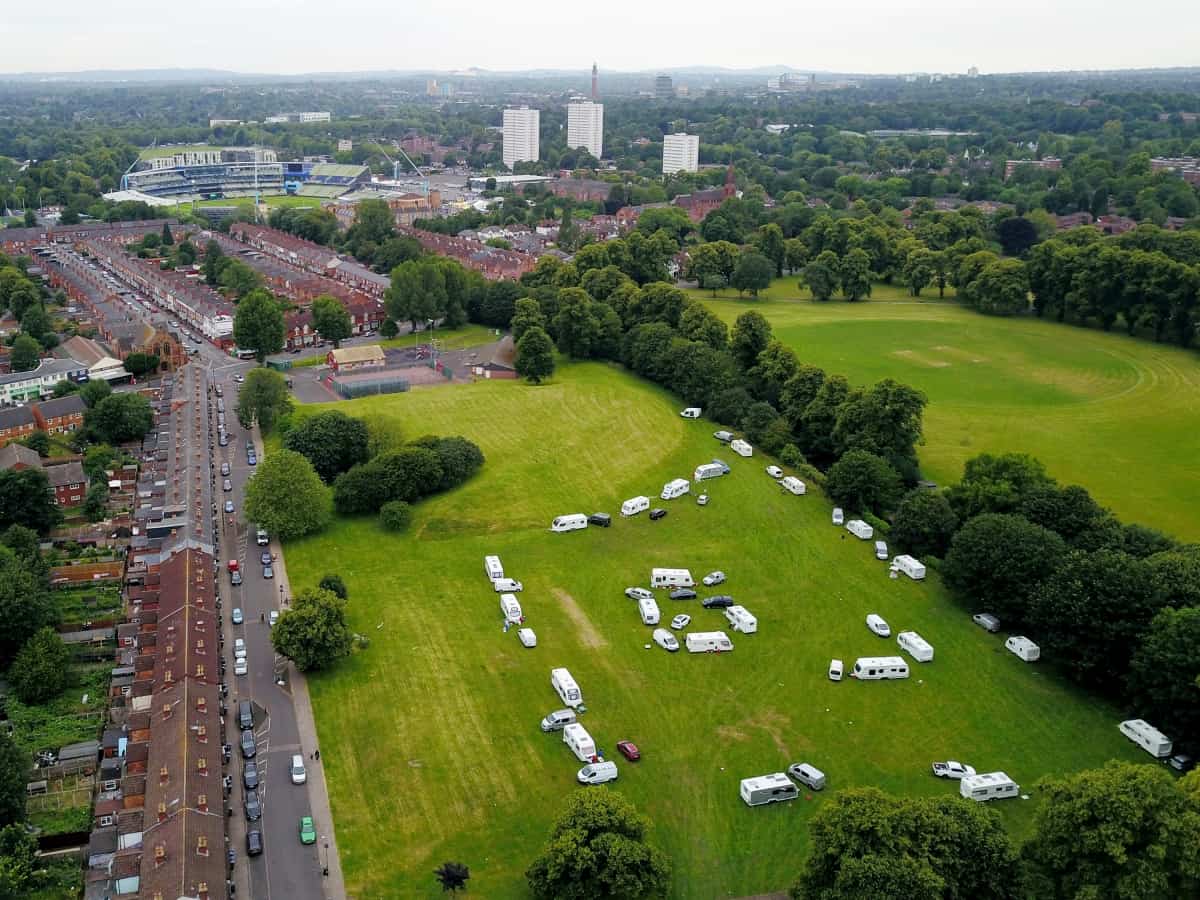 Around 100 travellers have parked up next to Edgbaston Cricket Ground – just 48 hours before England’s World Cup semi-final match against Australia.

More than 30 caravans towed by a fleet of luxury cars and 4x4s descended on Calthorpe Park, in Birmingham, last week with more arriving on Monday.

One councillor has accused town hall chiefs of failing to protect the park from travellers because it is in a predominantly “Asian area”.

Aerial pictures show the illegal camp is just 200 yards from the stadium where 25,000 cricket fans will watch England’s semi-final match on Thursday (11/7).

Children’s toys, plastic garden furniture and disposable barbecues litter the park which is a popular spot for families to enjoy picnics.

Staff at the cricket stadium use the site as a car park on match days, creating a headache for officials ahead of the game.

Birmingham City Council officials say they are aware of the traveller site and are working to get them moved.

A spokesperson said: “We are aware of them and looking into the matter.

“The council always try to reclaim and protect our land whenever travellers arrive on public land and will take steps to recover this land where illegal encampments encroach upon it.”

One councillor accused the authority of failing to take action because the park is in an
“Asian area.”

Labour councillor Zhor Malik, who represents Balsall Heath West, said: “We have been raising the issue about travellers parking at Calthorpe Park for more than a year.

“They were there just two weeks ago.

“Residents are very concerned that public space protection orders (PSPO) are in place for other parks in the city but not this one when we are frequently troubled by travellers.

“They feel discriminated against – this is a predominantly Asian area and parks in areas which are predominantly white seem to get PSPO orders yet we don’t.”

One resident said: “They are totally brazen. They just rock up and drive straight over the kerb and the grass.

“It wouldn’t be so bad if they didn’t put rubbish and mess everywhere. The council do nothing and the travellers know this so they just stay put.”

A spokesperson for the cricket ground said they would be “having conversations” with the council about the encampment.

*Last month a group of travellers set up camp at the home of Premiership rugby team Exeter Chiefs. The group were finally forced to leave after the club refused to cough up a £1,500 ransom and obtained a court order giving them the boot.