The real-life 'Cruella de Vil' repeatedly attacked her small dog after it wandered up to a stranger in a park. 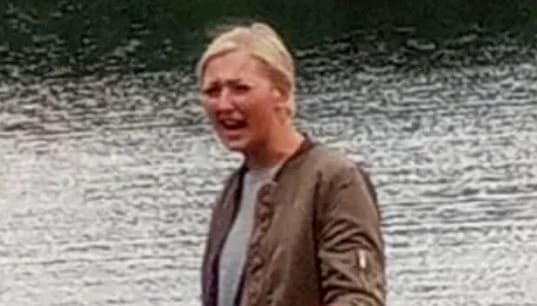 Police are hunting for a cruel woman who racially abused a dog walker – and kicked her own Chihuahua.

The real-life Cruella De Vil repeatedly booted her small dog after it wandered up to a stranger in a park.

Sussex Police say she caused “obvious distress” to the animal and racially abused a woman who remonstrated with her in Tilgate Park, Crawley, West Sussex.

A police spokesman said a woman came up to the chihuahua “kicking it hard across the grass several times and causing it obvious distress.

“When the other dog owner remonstrated with her for this cruelty, the woman racially abused her.”

Sussex Police have released photos of a woman they want to speak in connection with the attack just after 4pm on June 19.

The suspect was described as white, about 19, 5ft 8in tall, with long “whitish” hair, and of medium build.

She was wearing tight blue tie-dye jeans, a khaki bomber jacket with two orange stripes on the cuff, black trainers, and an ankle bracelet and a ring on the middle finger.

A woman with her was described as white, about 19, 5ft9in tall, with long black or very dark brown hair. She was of heavy build, wearing black trainers, black leggings, and a high waist beige off the shoulder jumper.

Police said officers will liaise with the RSPCA to establish what dog mistreatment offences may have been committed.

Investigator Kate Mitchell said: “If you know who this woman or her her friend are, please get in touch with us.”