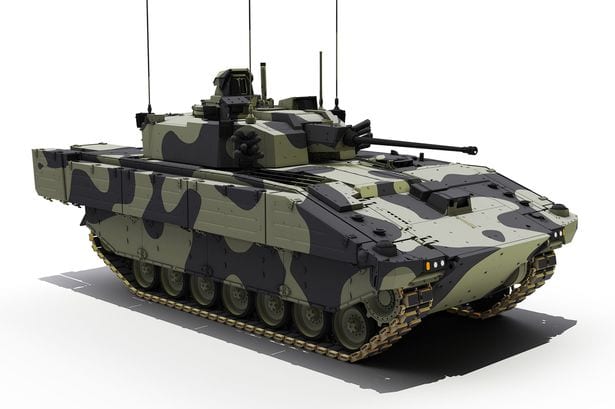 A new range of British army fighting vehicles will be constructed abroad, even though the PM hailed the £3.5bn deal as a huge boost to UK manufacturing.

According to the Mirror, there will be a hundred of the Ajax fighting vehicles will be “fully manufactured and assembled” in Spain, the Ministry of Defence has admitted.

The hulls for almost 500 more will be made in Spain before the vehicles are transported to the UK for the work to be completed.

40% of the work for the Ajax vehicles is being carried out by overseas firms, with the “majority” of the steel coming from Sweden.

The news that a sixth of the almost 600 strong fleet will be fully made in Spain will anger many in and outside of Westminster.

“But first we find out they’re using Swedish steel then we learn 100 of them are being completely built in Spain, while the rest will have their hulls built in Spain.

“This is another kick in the teeth for our manufacturing industry from the Tories.

“We need a proper industrial strategy, led by the Government committed to growing our manufacturing base.

“The Tories don’t care about these types of jobs. Many Tory MPs have never done a decent day’s hard graft in their life and you can see that in decisions like this.”

“A total of 100 vehicles will be fully manufactured and assembled in Spain.

“The hulls for the remaining 489 will be transported to the Merthyr Tydfil facility where they will be combined with constituent parts to make complete vehicles.”

When the order was first mentioned, in 2014, Mr Cameron said: “Not only will they be crucial in helping to keep Britain safe, they will also underpin nearly 1,300 jobs across the UK and showcase the strength of the UK’s highly skilled defence sector.”

The MOD added later: “We are assembling these vehicles in South Wales, supporting thousands of UK jobs and ensuring our servicemen and women have the very best equipment.”