In August this year he also made an out-of-court settlement with another former employee who accused him of sex discrimination, a breach of contract and owing her unpaid holiday pay and wages. 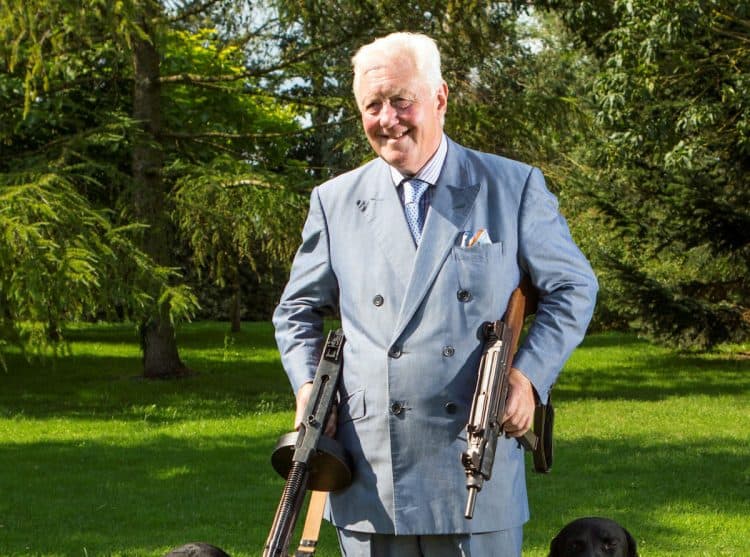 A controversial aristocrat who was ordered to pay two female employees £150,000 for his “appalling” behaviour has failed in his bid to have the damages reduced.

Sir Benjamin Slade, a baronet descended from Charles II, was ordered to pay the aggravated damages after claiming the two women only got pregnant to spite him and forcing them out of work.

Event planners Roxanne Stewart and Melissa Biggs worked for the 74 year old at his upmarket weddings and functions venue Woodlands Castle in the Somerset countryside.

They took him to an employment tribunal in 2019 after they were disciplined and had their pay blocked after becoming pregnant.

He wrongly told the tribunal that both women gave birth prematurely because they smoked and drank during their pregnancies and he threatened to report them to police for theft with no evidence.

Both babies were born early, the women said, due to stress.

He even told Mrs Stewart two days after the birth whilst her baby was in intensive care that if she returned to work she would lose the commission she had previously earned.

However despite losing the case, the multi-millionaire launched an appeal against the amount awarded, claiming the employment judge should not have given the women the maximum uplift of 25 per for breaching the ACAS code.

His legal team claimed the ‘uplift’ should not have been applied because it was “double-counting” the damages for the three different claims of unfair dismissal, sex discrimination and maternity rights.

They added that even if it was allowed, it should be reduced to 10-15 per cent. They also wanted the damages, which had been grossed up so that the women received the agreed amount after tax, reduced

But an Employment Appeal Tribunal judge ruled that it had been correct to award the highest uplift level for breaching the ACAS code.

In a judgement the Honourable Mr Justice Martin Griffiths QC said: “There was no obvious or significant double-counting in the 25 per cent uplift and the awards for aggravated damages and injury to feelings.

“The employment tribunal was entitled to apply the maximum uplift of 25 per cent allowed for failure to comply with the Codes of Practice.

“There must be cases in which the top of the range 25 per cent is applied, otherwise the range set by Parliament is not being respected.

“The top of the range should undoubtedly be applied only to the most serious cases.

“The result is that the appeals are dismissed on both of the issues.”

The two women fell pregnant within the space of five months in 2017, with Ms Stewart being sacked in December 2017 and Mrs Biggs resigning in January 2018 in a case of constructive dismissal due to the way she was treated.

Both successfully argued in the 2019 employment tribunal that Sir Benjamin acted in a “high-handed and oppressive manner” after discovering they were expecting babies within months of each other.

Sir Benjamin, who has had run-ins with his local council in the past, claimed Mrs Biggs and Ms Stewart “timed” their pregnancies to “spite him” and refused to pay their statutory dues.

In the case of Ms Stewart, her boss subjected her to an “entirely spurious and vindictive ‘disciplinary’ process designed to drive her from the business”, Employment Judge Colm O’Rourke said.

Summing up the case, Mr Justice Griffiths said: “She [Ms Stewart] had been a very long-serving and clearly loyal employee.

“She was subjected to an entirely spurious and vindictive ‘disciplinary’ process, designed to drive her from the business, at a point both before she gave birth prematurely and within the weeks following the birth, when her baby was in intensive care.

“She was so concerned about both this process and [the] failure to pay her that she felt obliged to request a meeting two days after giving birth, at which she was subjected to discriminatory comments and informed, in the event that she should return to work, she would lose the commission she had previously earned.”

Both women, who were 28 at the time, worked at Woodlands Castle, a 17th century country house near Taunton, Somerset, which Sir Benjamin owns and hires out for functions.

Mrs Biggs went on maternity leave in September 2017 and Miss Stewart, who joined Woodlands straight from school at 17, followed in December.

Both had premature births and Ms Stewart said this was due to the stress Sir Benjamin put her under as her child had to go into intensive care.

Both babies made full recoveries, Bristol Employment Tribunal was told.

Sir Benjamin, who made his fortune from shipping, falsely claimed both women gave birth prematurely because “they had smoked and drank” during their pregnancies.

He threatened to report them to the police for theft without any evidence and made an offensive comment about Ms Stewart’s baby “dropping out”, the original tribunal heard.

The panel of judges awarded aggravated damages of more than £150,000 for injury to the women’s feelings because of the stress he put them under.

In August this year Sir Benjamin also made an out-of-court settlement with another former employee who accused him of sex discrimination, a breach of contract and owing her unpaid holiday pay and wages.

Jessica Cooper-Hogan, 19, who worked for him as an event coordinator at Woodlands Castle took legal action against Sir Benjamin and 10 of his other firms based around the country.

But during a preliminary hearing again at Bristol Employment Tribunal, the claims were dismissed after the parties reached an out-of-court settlement of an undisclosed amount.

Sir Benjamin, who is a descendant of Charles II and George IV, lives in a cottage at his family home a few miles from Woodlands Castle, called Maunsel House in North Newton near Bridgwater, Somerset.

During the height of the first pandemic peak last March, he offered up his stately home as a space for an emergency coronavirus hospital.

The estate is where Chaucer wrote part of The Canterbury Tales and was built in the late 14th or early 15th century.

Previously in 2012 Sir Benjamin was fined £2,000 after being convicted of firearms offences and breaching a shotgun certificate by leaving an unsecured weapon in an upstairs bedroom at 2,000-acre Maunsel House.

Police scrambled a helicopter and flew overhead during a wedding at the venue, after he took a pot-shot at a fox.