By David Fleming  A cold, wet and windy Saturday in Dublin played host to a serious of events against the establishment of an Irish branch of the European far-right Pegida movement. Pegida Ireland had called for a demonstration to be held outside Dublin’s iconic GPO at 3pm on Saturday the 6th of February to coincide […] 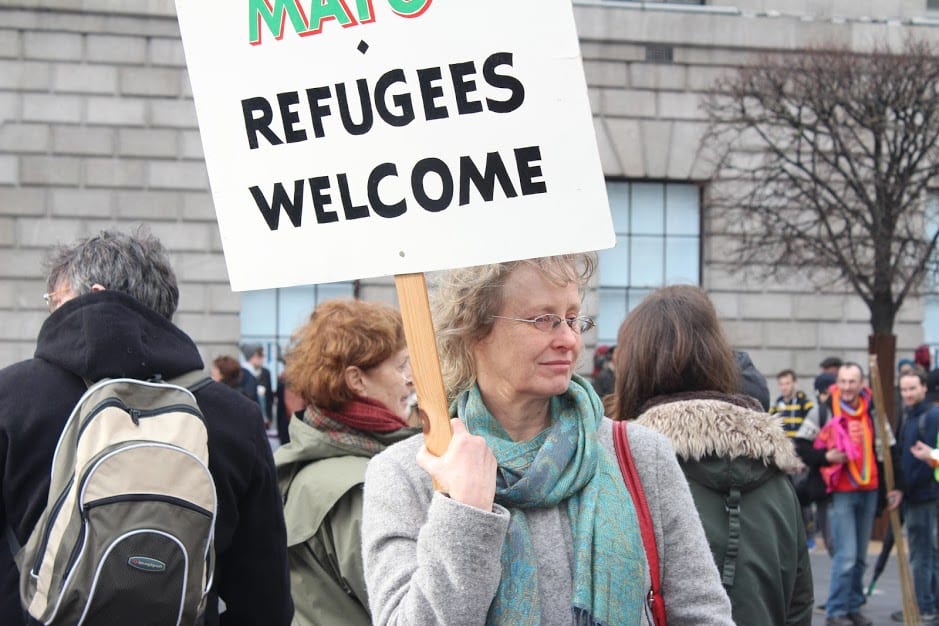 A cold, wet and windy Saturday in Dublin played host to a serious of events against the establishment of an Irish branch of the European far-right Pegida movement. Pegida Ireland had called for a demonstration to be held outside Dublin’s iconic GPO at 3pm on Saturday the 6th of February to coincide with other rallies across Europe. In response the Anti Racism Network (ARN) and a variety of other anti-racism campaigners, migrant support groups and wide range of leftist organisations and political parties called for a counter demo on the same spot at 1:30pm that day. This attracted some 2000 people, young and old, all there to express solidarity with refugees and migrants and to stand united against the formation of Pegida in Ireland and oppose the movement burgeoning across the continent.

It was a lively and jubilant affair with a number of speakers from Ireland and abroad including Sinn Fein MEP Lynn Boylan, Shaykh Al-Qadri, founder of the Irish Muslim Peace & Integration Council, and a host of others. The audience listened intently and rapturous applause and cheers came from the crowd at times as the orators denounced the rise of the far right in Europe and ISIS. As they called for justice for refugees and migrants, an end to inequality and austerity in speeches delivered outside the birth place of Irish revolution on this the centenary year of the 1916 rising, the clock ticked towards 3 and it was it was time for Pegida Ireland to show up. TLE was present when, just before 3pm, a section of the crowd veered off to the right down North Earl St towards Talbot St. While rushing towards the street we were met with a barricade of gardai Public Order Unit officers complete with dogs, batons and riot shields. It transpired that members of Pegida Ireland had planned on walking down that street towards the anti-racism demonstration when they were confronted by some anti-fascist action activists. Scuffles broke out and the roughly 15 members of Pegida Ireland were chased down the street, briefly taking refuge among Saturday afternoon bargain hunters in a 2 euro discount store, before being protected by the gardai.

Other members of the organisation split from the main group and made it to the parallel Cathedral St and into Brannigans pub. They were followed by the now large crowd of anti-fascist and anti-racism demonstrators chanting “Fascist scum, off our streets” and “Nazi scum off our streets”. The gardai once again barricaded the street at both ends. With vans, horses, dogs, batons and shields they kept the crowd at bay. It was here that an RTE (Irish public broadcaster) cameraman was struck by a garda baton. He was not the only one, this reporter spoke with two young men who had both been struck by members of An Garda Siochana, one across the leg the other visibly bleeding from a gash on his head. He said the garda knocked him to the ground before striking him on the head he was then helped up by someone in the crowd and escaped further beating. Neither man wanted to give his name for fear of being arrested. Consistency of Pegida Ireland/History of the group:

Pegida Ireland is a progression from Identity Ireland, a small group of far right activists based in the country. Aided by former EDL frontman Tommy Robinson, now of Pegida in the UK, they announced the February 6th launch at a press conference in January of this year. Despite rumours that Tommy would show he was busy hosting the poorly attended Pegida rally in a Birmingham industrial estate. That left around 25-30 members altogether, a paltry number in comparison to the some 2000 anti-racism supporters. These were made up of group leader Peter O ’Loughlin and a number of other far right activists from Poland and the UK. O’Loughlin and a few of his followers never made it to the city centre having been confronted by anti-fascist activists on the Luas (tram) heading in to meet up with their continental cohorts.

This was confirmed by Pegida Ireland on their twitter account. Yet another disastrous event for the fractured Irish far right following last year’s anti-Muslim protest outside a Dublin Mosque. An event at which only 8 far right protesters showed up and were confronted by around 100 anti-racism, anti-fascist supporters and members of the Mosque who offered them tea, coffee and dates as a welcoming gift. Are they getting the message?

One would hope so, with such a small number of Pegida Ireland supporters showing up for their launch, most of whom were either fascists from the UK or Poland, it is clear that the Irish public have no appetite for this kind of movement. The anti-racist activists on the other hand numbered in their thousands and stood for hours in the wind and rain while chants of “Who lives here belongs here” rang out; the message is quite clear.