Administrators that run an anti-EU group on Facebook were left red faced after a poll created to gauge the nation’s appetite for leaving the union returned a strong Remain consensus.  The poll, posted on “Nigel Farage – Leave Means Leave”, garnered almost a million votes since it was posted on 22nd September. It asked members […] 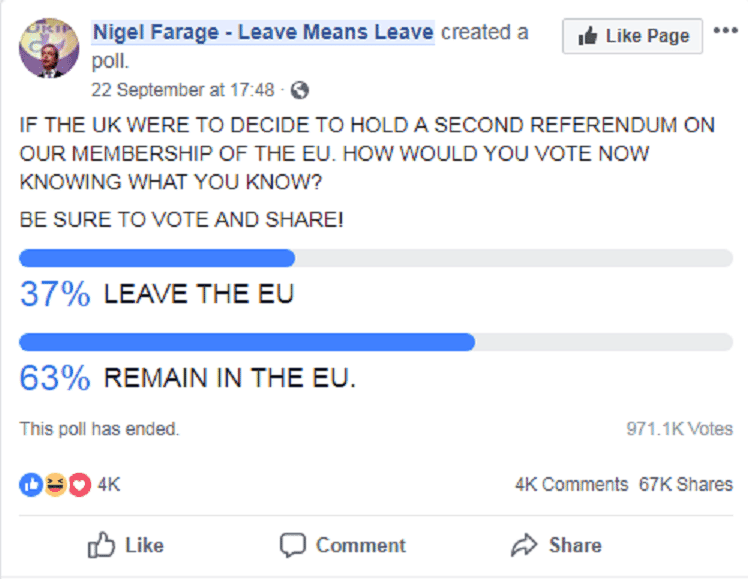 Administrators that run an anti-EU group on Facebook were left red faced after a poll created to gauge the nation’s appetite for leaving the union returned a strong Remain consensus.

The poll, posted on “Nigel Farage – Leave Means Leave”, garnered almost a million votes since it was posted on 22nd September.

It asked members of the anti-EU group how they would vote in a second referendum “knowing what you know”, but returned a shocking outcome.

Some 63 per cent voted to remain in the EU, with just 37 per cent saying they now wish to leave the union – a stark turnaround on the national result in 2016.

One group admin posted shortly before the result came in: “Amazing how no Remainers were ever going to see this Poll yet the result is neck and neck. And I for one couldn’t be happier. Democracy at its finest. Keep voting!”

According to recent polling more than 100 parliamentary constituencies which backed Leave in the 2016 referendum would now vote to remain in the European Union.

The findings suggested that most seats in England, Scotland and Wales now contain a majority of voters who want to stay in the EU.

Among constituencies found to have switched from Leave to Remain were arch-Brexiteer Boris Johnson‘s Uxbridge and South Ruislip, Michael Gove’s Surrey Heath and the seats of pro-Brexit Labour MPs Frank Field in Birkenhead and Graham Stringer in Blackley and Broughton.