Having made her debut with stranger than fiction doc The Wolfpack, Crystal Moselle appears to have almost literally stumbled on the genesis of her first fiction feature. She ran in to the all girl skateboarding crew Skate Kitchen on the New York subway and, fascinated by them, bought them coffee and began to hang out […] 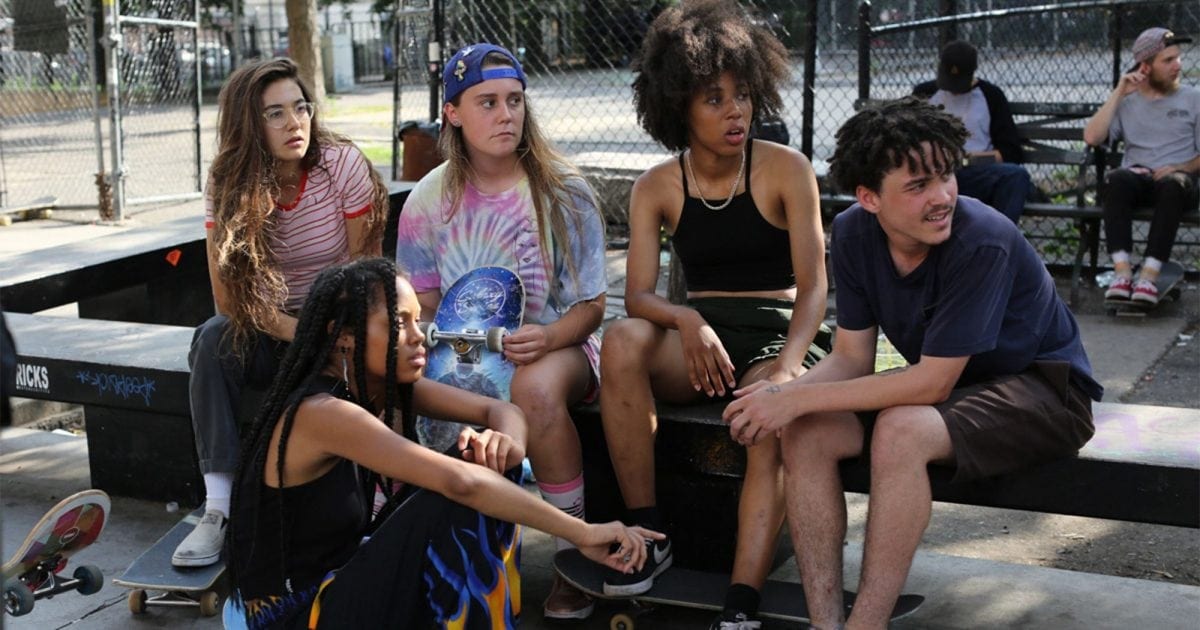 Having made her debut with than fiction doc The Wolfpack, Crystal Moselle appears to have almost literally stumbled on the genesis of her first fiction feature. She ran the skateboarding crew Skate Kitchen on the New York subway and, fascinated by them, bought them coffee and began to hang out with them. This led initially to the short film That One Day and eventually to this film; a blend of fact and fiction with the crew apparently largely playing themselves, but within a fictional framework and with different names.

Camille (Rachelle Vinberg) injures herself badly when she misses a trick and promises her mother (Elizabeth Rodriguez) that she’ll stop skating, but soon she’s secretly taking trips from her Long Island home into the city to skate with a group of girls. Camille moves in with Janay (Ardelia Lovelace) and grows closer with the group, but also with Devon (Jaden Smith) and his group of skating friends.

Skate Kitchen is a hangout movie in the very best sense. Moselle’s camera is an organic presence, carefully observing – often in close up – the minutiae of everyday life over the course of one New York summer. There is a feeling of complete authenticity here, from scenes that clearly are more part of the film’s construct (like those between Camille and her mother), to moments that are almost certainly entirely spontaneous (the girls skating carefree through the city to Junior Senior’s Move Your Feet). The close friendships between the Skate Kitchen girls clearly pay dividends, as their interactions are always totally natural, from the way that Camille is shy to begin with, and not fond of hugging, through the growth of relationships and subsequent fights. As the only experienced actor among the youthful cast, Jaden Smith fits in totally naturally as Devon, giving an unaffected performance and playing well off Vinberg, who is clearly the most accomplished actress among the Kitchen girls.

At a glance, the film’s skateboarding sequences may look like they are all just flash; simply a convenient and visually cool world for this story to exist in, but it’s clear from the film and from hearing Nina Moran (who plays Kurt) talk that there is greater significance to them. This is about giving girls a voice in a world in which they have traditionally been only a tiny presence. This is something that comes through in the film, especially in how it’s part of the way that the girls view Camille skating with Devon and the boys as something of a betrayal.

Beyond the skateboarding, the scenes between the girls are brilliantly observed. It’s not clear how closely each individual moment is based on real life, but from the lovely bonding moment of Camille and the girls building her a new board after her mother confiscates the old one, through to a wrenching scene of Camille explaining her relationship with her parents to Janay, everything is shot through with the same feeling of private moments being observed rather than something being staged. Vinberg is great throughout, but truly exceptional in this scene, every emotion delivered with a matter of fact clarity that doesn’t feel at all acted.

I’ve said before that I think we are quietly in the midst of a golden age for American coming of age cinema, especially in the indie scene, and Skate Kitchen is just more proof of that. It’s a film that manages to be completely enveloping even when it has almost no story, that doesn’t have to be depressing be honest, and that I imagine feels current for the generation it depicts but will also be nostalgic for older audiences.