The new fares are part of the 'Bee Network', which hopes to mimic London’s fully-integrated 'Oyster' transport system. 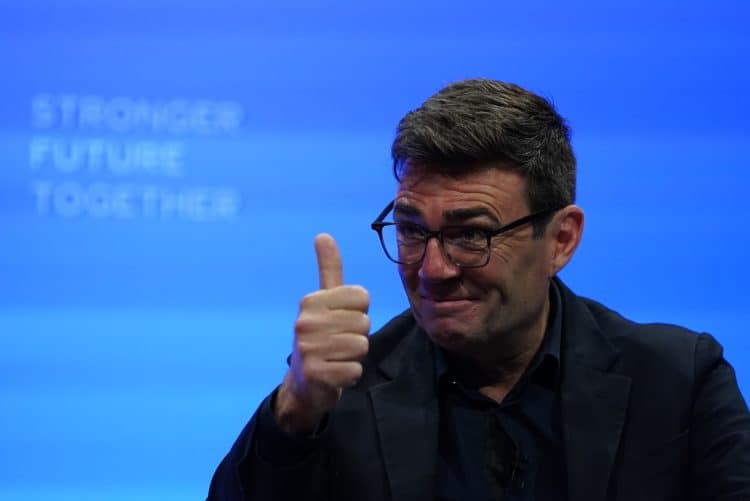 Andy Burnham’s new affordable #GetOnBoard bus fare scheme has been given the full go ahead and a launch date. The Mayor of Greater Manchester announced that adults will now pay no more than the capped fee of £2 for a single bus journey anywhere across the region from September 4 onwards.

Unveiling the next stage in his plans for affordable public transport on August 17, the Liverpool-born Labour politician and MP for Leigh debuted a new advertising board highlighting the revised bus prices, including just £1 journeys for children aged 5-16 or £2.50 for 24-hour travel cards.

Those under five travel absolutely free.

Moreover, commuters will now only have to pay a maximum of £5 for unlimited bus journeys (ie. the old-school MegaRider under Stagecoach) on as many different operators as they like.

Burnham has been building a London-style “Bee Network” in the Northern Powerhouse ever since he secured the £1.07bn in capital funding needed to start developing the hive back in October, 2021. His overall aim is to integrate buses, trams and a new fleet of ‘bee bikes’ across the region, having first started with Manchester central, Salford and Media City.

As well as several buses and trams already receiving a fresh lick of Manchester bee-inspired yellow and black paint, more than 1,500 bicycles – including 300 e-bikes – were rolled out back in November and locals have been putting them to good use, with 10,000 miles ridden in just the first four weeks.

The Manchester Mayor has been pushing for fairer rates on public transport for years, spotlighting train journeys as the most extortionate means of getting around thanks to heavy privatisation and profiteers upping their prices every year. The bus reform itself was brought forward and Greater Manchester’s railways are no doubt next on his list as his team look to bring transport under public control next year.

Sturgeon: Super wealthy ‘laughing all the way to the bank’ after mini-budget

Appearing on BBC Breakfast to announce the £2 bus fares on Wednesday morning, Burnham explained how the new scheme will see Manchester become the first regulated bus service outside of London since the 1980s, saving passengers “around 50% of some journeys”.

Reflecting on the news of inflation hitting a 40-year high, cheaper bus rides couldn’t have come at a better time for his city amid the cost of living crisis.

Better still, those aged between 16-18 can still travel free thanks to Manchester’s Our Pass scheme, aimed at those who have finished their GCSEs and are now heading to work or college.

Related: Andy Burnham gets it SPOT-ON with his take on striking workers