“There will be a point where the funding will be cut so much, we won’t have a national health service,” he told The London Economic. 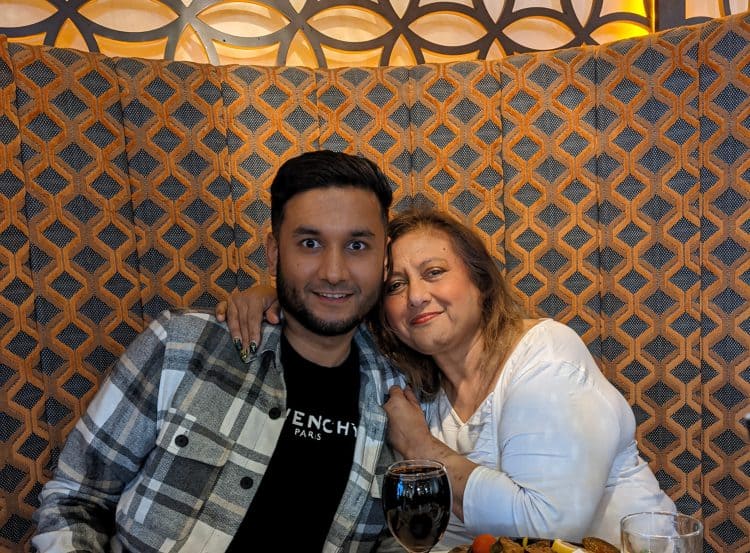 A son whose mother died whilst waiting almost an hour for an ambulance and making seven 999 calls has told The London Economic “the system is broken”.

Akshay Patel, 27, was woken up in the middle of the night by his mother, Bina, who was struggling to breathe at their home in Ashton-under-Lyne, Greater Manchester on 11 October.

Akshay, who works for a private provider helping the NHS with Covid sites across the UK, was living with her to look after her mental wellbeing after his father passed away from a heart attack three years ago.

Although they were only two minutes away from the hospital, his mother died from the same health problem after the ambulance did not arrive in time.

He said: “I remember her final words where she was screaming for my dad because she waited that long for help and no one arrived.”

Akshay first called an ambulance at 2.30am, after getting his mother a glass of water and trying to calm her down. He said the response time for Bina’s health emergency should have been 18 minutes, but until 3.22am she was struggling to breathe for 52 minutes.

He said: “She was just screaming, ‘when are they coming?’, ‘I can’t breathe’, ‘tell them to hurry up’ and I was just reassuring her they were coming and it wouldn’t be long and it got to a point where she was like, ‘they are not coming, I’m gonna die, I’m dying’.

“My dad was called Kirit, and she was like ‘Kirit, just take me’ and the moment she said that she passed out on the floor. At that point, I was giving her CPR and I called 999 and they said just continue giving her CPR. I did it for probably five minutes and then the ambulance arrived. By that time, it was too late.”

In a recording heard by TLE, the 56-year-old can be heard repeating “I’m dying” and the operator telling Akshay “we are very busy” and that the waiting time “could be over an hour and a half” since the first call he made.

Upon asking if there was anything he could do in the meantime, Akshay was told to “just keep reassuring her”.

In another call, Akshay is asked if his mum was breathing and replies distressed: “No… I don’t know…”

‘It’s all down to funding’

Now, he is looking for answers as he believes more could have done more to save his mum – including being told sooner that it would be a long waiting time, when he thinks Bina’s condition would have allowed him to drive her to the nearby emergency department.

He said: “The system is broken and I have no confidence in it.

“The whole country relies on the [health] service and we may not use them every day, but when we do use them, we expect them to be there within a reasonable time.

“No one should wait the time I waited, especially for someone who can’t breathe. This should not happen in the UK in 2021, we have the infrastructure in place, we don’t live in a third world country.”

But he thinks that, as it is a public sector service, the fault of what happened lies in the funding. “The Conservatives’ funding for the services has been cut year after year since 2010, there’s queues of ambulances waiting to take patients into the hospitals because the funding keeps getting cut.

“There will be a point where the funding will be cut so much, we won’t have a national health service,” he said.

Although the government told The London Economic that they are investing billions in the ambulance, health and care services over the next months and years, Akshay thinks it is “too late” and “the labour is not there”.

‘The labour is not there’

“And the only way you’re gonna get more people to do these jobs is by increasing their pay. You can spend billions on infrastructure, we don’t have people to run the infrastructure. There’s still going to be a shortage.

“We were told from a very young age, any kind of life-threatening emergency, ring these numbers, these three-digit numbers will save a life or will stop the crime or will stop the fire. When you actually do ring those three digits, they don’t turn up in time. We all pay national insurance and income tax, and this is where we expect our money to go into and it seems the resources are not there.”

Meanwhile, his MP, Labour’s deputy leader Angela Rayner, has reportedly sent a letter to the North West Ambulance Service and will send another one to health secretary Sajid Javid to ask what he will do to change the system, according to Akshay.

A spokesperson for the Department of Health and Social Care told TLE: “We are supporting the NHS to meet the significant pressures it is facing to ensure everyone can access the treatment they need when they need it.

“Ambulance Trusts have been given an extra £55 million to boost staff numbers in control rooms and on the frontline.

“This is on top of our record investment this year, including £5.4 billion over the next six months to tackle the backlog, as well as £36 billion for health and care over the next three years.”

And a NWAS spokesperson said they are investigating the incident after receiving an official complaint.

“We wish to pass on our deepest sympathies to Mr Patel and his family for the loss of his mother,” a spokesperson said, adding: “We are in contact with the family and will update them with our findings.”

Related: I am an NHS doctor and my wife is a nurse. This is why we may leave the UK.