By Joe Mellor, Deputy Editor A Tory wheelchair user, who has voted Conservative for 40 years, handed in his membership in protest after yesterday’s budget. He claimed the party is “destroying lives.” Graeme Ellis even went so far as to sabotage his own party’s website, in disgust at Osborne’s cruel budget and the damage it […] 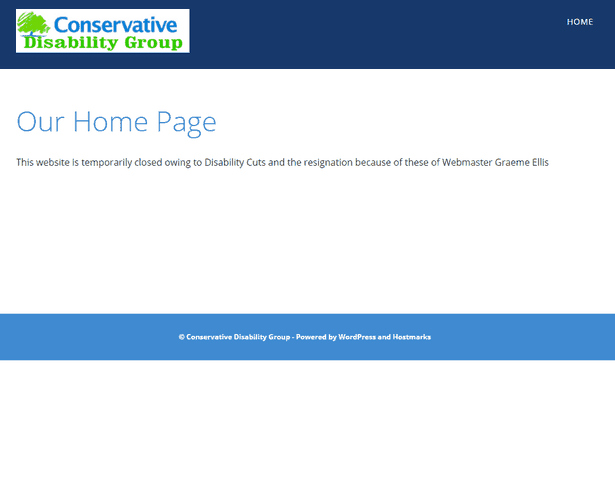 A Tory wheelchair user, who has voted Conservative for 40 years, handed in his membership in protest after yesterday’s budget.

He claimed the party is “destroying lives.” Graeme Ellis even went so far as to sabotage his own party’s website, in disgust at Osborne’s cruel budget and the damage it will do to disabled people.

Ellis a disability campaigner took the entire website of the Conservative disability group with him, in its place he left a statement that said: “This website is temporarily closed owing to Disability Cuts”.

Graeme’s anger comes as the Chancellor gave the already rich a huge tax cut, after he slashed £4.4bn from PIP (Personal Independence Payments), at the same time he is cutting £30 a week to (ESA) employment & Support Allowance to disabled people, the most vulnerable in society.

The 58-year-old, who runs a benefits advice service, said: “I would like to say to him – does he realise how he’s destroying lives?

“I’ve had distraught clients on the phone today. I’ve had people in tears worrying about the future.

“How can I morally represent clients when I remain in an organisation that’s doing these cuts?

“I’m just an ordinary citizen but I feel as though I want to lead a campaign over this.

Ellis used to work for the NHS and is from Lancaster had served on the national executive of the Conservative Disability Group. Additionally he runs a support network for people facing disability benefit appeals and assessments.

He said the final straw was watching Osborne announce a tax cut for people earning over £43,000 – while at the same time slashing PIP.

He said: “I changed the website this afternoon. I’m appalled by what’s happened and wanted to make a very public statement.

“I’ve been a Conservative voter since I could vote. But as a lifelong Conservative I could no longer agree with what the government’s doing.

“I’ve received a lot of phone calls including from the chairman of the group but I don’t want any contact with anybody in the group.”

“The owner of the domain, who is no longer a member of the Group, has deactivated it without any instruction to do so.”