Activists gather with ‘blank canvas’ to protest against anti-monarchy arrests

“The arrests over the last few days are in perfect continuity with a broader shutdown on protest that the state finds unpalatable which to me is really worrying." 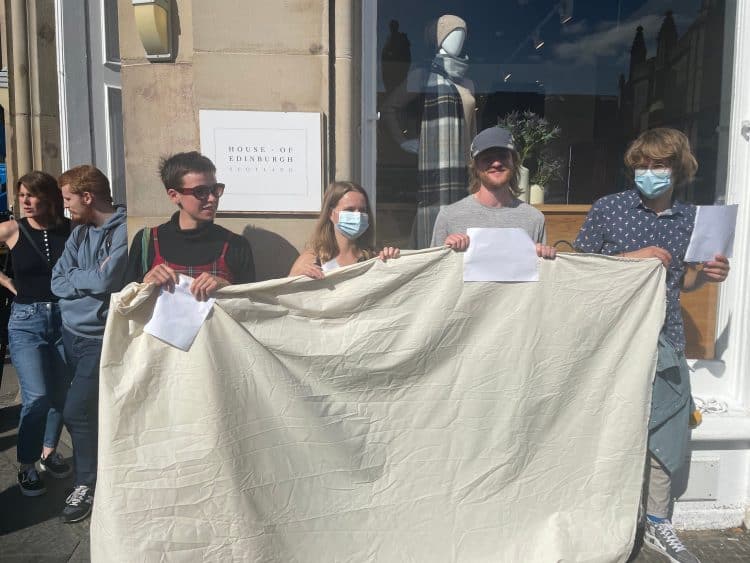 Activists gathered outside St Giles’ Cathedral in Edinburgh to protest against multiple arrests that have happened amid ceremonies for King Charles and the late Queen.

The group were pictured on the Royal Mile carrying “blank canvases” as members of the public continued to file into the place of worship to pay their respects to the late monarch on Tuesday afternoon.

Douglas Rogers, 27, said he was taking part in the protest to “stand in solidarity with those who have been arrested protesting the monarchy”.

In the last few days, several arrests have been made in relation to disturbances during royal ceremonies.

Symon Hill was arrested on suspicion of a public order offence after shouting “who elected him?” when he came across a public formal reading of the proclamation of the accession for the King in Carfax, Oxford. He was later de-arrested.

Meanwhile, a protester bearing a handmade sign saying “not my King” was spoken to by police and escorted away from the Palace of Westminster.

Speaking to PA news agency, Mr Rogers said: “I feel a lot of solidarity and shocked to be honest.

“I think people just watching it happen on news footage might not appreciate how traumatic it is being arrested.

“We live in a free society and there’s someone spending ten hours in a police station being treated as a criminal for sharing an opinion.”

He added: “I am really worried about the state of our democracy right now, especially with the new legislation clamping down on protests.

“The arrests over the last few days are in perfect continuity with a broader shutdown on protest that the state finds unpalatable which to me is really worrying.

“We have to be able to disagree with each other, as long as it’s in a peaceful way.

“In the last few days people were arrested under the breach of peace legislation, but there’s no way that is going to stand up in court. I don’t agree with violent protest, but protest has to be protest.”

Another fellow activist, who preferred to remain anonymous, said the group had “interesting reactions” to their demonstration.

The 30-year-old said: “A lot of people are just going to work and not stopping for the ceremonies, and they have said ‘good on you’.

“But others have said this is ‘really disrespectful’, even though our signs are blank.

She added: “This is about the right to protest.

“It’s about the fact that anti-monarchy sentiment is being shut down and that people are being arrested for sharing those sentiments.

“This time is the perfect time to say we shouldn’t have an unelected head of state.”

Related: Some foodbanks are shutting for Queen’s funeral sparking many reactions

Watch: Boris Johnson pays tribute to ‘Elizabeth the Great’ – not everyone is gushing about it though