Mariupol officials said on March 15 that at least 2,300 people had died in the siege, with some buried in mass graves. 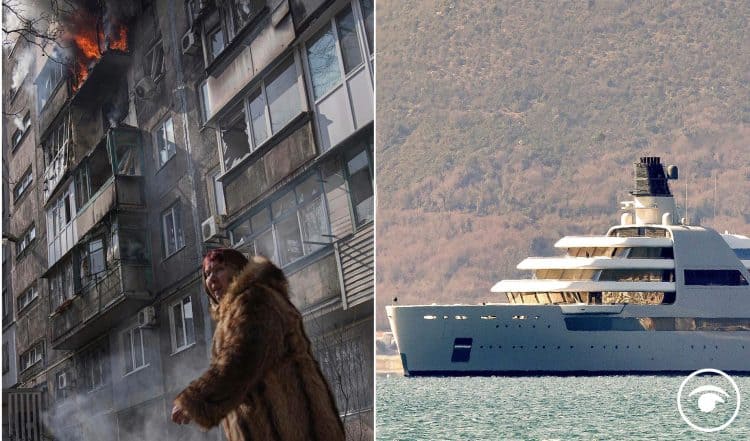 A yacht belonging to sanctioned Russian oligarch Roman Abramovich has docked in Turkey’s Aegean Sea resort of Bodrum, Turkish media has reported. It comes as there are stories of sheer terror coming from the destroyed port of Mariupol.

The bleak picture coming from the Ukriane comes amid international moves to freeze assets belonging to top Russian businessmen with close links to the Kremlin.

Turkey’s private NTV television said the Bermuda-flagged luxury yacht Solaris docked at the southern port in Turkey — which has not joined sanctions on Russia — after departing from Montenegro.

A group of Ukrainians carrying Ukrainian flags with the words “No War” emblazoned on them boarded a small motor boat and tried to prevent the yacht from docking, the Sozcu newspaper reported.

It was not known if Mr Abramovich was aboard the yacht or if it was moved to Turkey to avoid sanctions.

Last week, the European Union imposed sanctions on Mr Abramovich as it updated a list of individuals facing asset freezes and travel bans over their ties to Russian President Vladimir Putin’s government, which has sent the Russian military to invade Ukraine.

Civilians making the dangerous escape from Ukraine’s embattled southern port of Mariupol described fleeing through street-to-street gun battles and past unburied corpses as a steady Russian bombardment tried to pound the city into submission.

While Russian forces carried on with the siege after the city’s defenders refused demands to surrender, the Kremlin’s ground offensive in other parts of the country advanced slowly or not at all, knocked back by lethal hit-and-run attacks by the Ukrainians.

The Ukrainian army said early on Tuesday that it had forced Russian troops out of a strategically important Kyiv suburb following a fierce battle.

The regained territory allowed Ukrainian forces to retake control of a key highway to the west and block Russian troops from surrounding Kyiv from the northwest.

In Mariupol, with communications crippled, movement restricted and many residents in hiding, the fate of those inside an art school flattened on Sunday and a theatre that was blown apart four days earlier was unclear.

Mariupol officials said on March 15 that at least 2,300 people had died in the siege, with some buried in mass graves. There has been no official estimate since then, but the number is feared to be far higher after six more days of bombardment.

For those who remain, conditions have become brutal. The assault has cut off Mariupol’s electricity, water and food supplies and severed communication with the outside world, plunging residents into a fight for survival. Fresh commercial satellite images showed smoke rising from buildings newly hit by Russian artillery.

Mariupol had a pre-war population of about 430,000. Around a quarter were believed to have left in the opening days of the war, and tens of thousands escaped over the past week by way of the humanitarian corridors. Other attempts have been thwarted by the fighting.

Those who have made it out of Mariupol told of a devastated city.

“There are no buildings there anymore,” said 77-year-old Maria Fiodorova, who crossed the border to Poland on Monday after five days of travel.

Olga Nikitina, who fled Mariupol for the western Ukrainian city of Lviv, where she arrived on Sunday, said gunfire blew out her windows, and her apartment dropped below freezing.

“Battles took place over every street. Every house became a target,” she said.

A long line of vehicles stood on a road in Bezimenne as Mariupol residents sought shelter at a temporary camp set up by Russian-backed separatists in the Donetsk region.

An estimated 5,000 people from Mariupol have taken refuge in the camp. Many arrived in cars with signs that said “children” in Russian.

A woman who gave her name as Yulia said she and her family sought shelter in Bezimenne after a bombing destroyed six houses behind her home.

“That’s why we got in the car, at our own risk, and left in 15 minutes because everything is destroyed there, dead bodies are lying around,” she said. “They don’t let us pass through everywhere — there are shootings.”

In all, more than 8,000 people escaped to safer areas on Monday through humanitarian corridors, including about 3,000 from Mariupol, deputy prime minister, Iryna Vereshchuk, said.

Russian shelling of a corridor wounded four children on a route leading out of Mariupol, Zelensky said.