Cardinal Robert Sarah warned of the "dangers of pornography", swiped at Irish abortion rights reform and said the UN was "decisive" in creating a Satanic world. 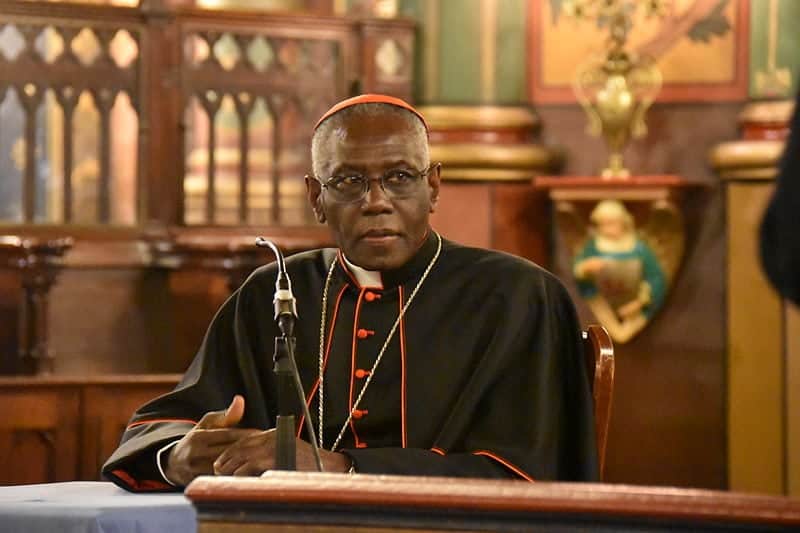 A senior Cardinal told thousands of pilgrims that Western society is becoming “more destructive” than Islamist terrorism – and called on young Christians to become “martyrs.”

Cardinal Robert Sarah swiped at Irish abortion rights reform, warned of the “dangers of pornography” and said the UN was “decisive” in creating a Satanic world.

The 72-year-old Guinean prelate also called on young Christians to be “martyrs” in a “New Evangelisation” of the West at the end of the Chartres Pilgrimage in France.

He said: “Western society has become like a drunken boat in the night.

“Deprived of the light of God, Western society no longer knows how to respect its elderly, accompany unto death its sick, make room for the poorest and the weakest.”

The Cardinal on Monday said it was being filled with the “maddest ideologies” in place of God.

He added a Western society without God can become the “cradle of an ethical and moral terrorism more virulent and more destructive than Islamist terrorism.”

“Remember that Jesus told us, ‘And do not fear those who kill the body but cannot kill the soul; rather fear him who can destroy both soul and body in hell’.”

The Cardinal called young people to be “martyrs” to “combat and oppose” a world “under the rule of Satan and sin.”

He added: “The world of ideologies that deny human nature and destroy the family structures from the UN, which impose a new global ethic, play a decisive role and have today become an overwhelming power.

“Dear friends, we are not called to be mediocre Christians.

“No, God calls us all to the total gift, to the martyrdom of the body or the heart.

“You, young people of today, will be the saints and the martyrs that the nations are waiting for in a New Evangelisation.”

He added: “In many Western countries, it is a crime today to refuse to submit to these horrible ideologies. This is what we call adaptation to the spirit of the times, conformism.

“A great British believer and poet of the last century, Thomas Stearns Eliot wrote a few verses that say more than whole books: ‘In a world of fugitives, the person taking the opposite direction will appear to run away’.”

He urged Christians “not to be silent” and save “wayward souls” from “hopeless nihilism” and “aggressive Islamism”.

Speaking to an audience of thousands including the Bishop of Chartres, Philippe Christory, he said: “Let’s look around us – Western society has chosen to establish itself without God.

“Witness how it is now delivered to the flashy and deceptive lights of a consumer society: to profit at all costs, and frenzied individualism.”

Pope Francis announced he was seeking new pastors when he announced his choice of new cardinals on Pentecost Sunday.

Cardinal Sarah discussing how Christians should be “pastoral” asked who will lead so many “wayward souls, lost, sad, worried and lonely” to the light?”

“Are we going to leave them to be delivered to error, to hopeless nihilism, or to aggressive Islamism?

“We must proclaim to the world that our hope has a name: Jesus Christ, the only Saviour of the world and of humanity.

“We can no longer be silent.”