A commuter has sued a rail firm after regular delays left him repeatedly late for work. Ecologist Seph Pochin, 45, took legal action against Greater Anglia after being held up 183 times in a year. He has made the 32-mile journey around 550 times in the last year – travelling 32 miles from his home […] 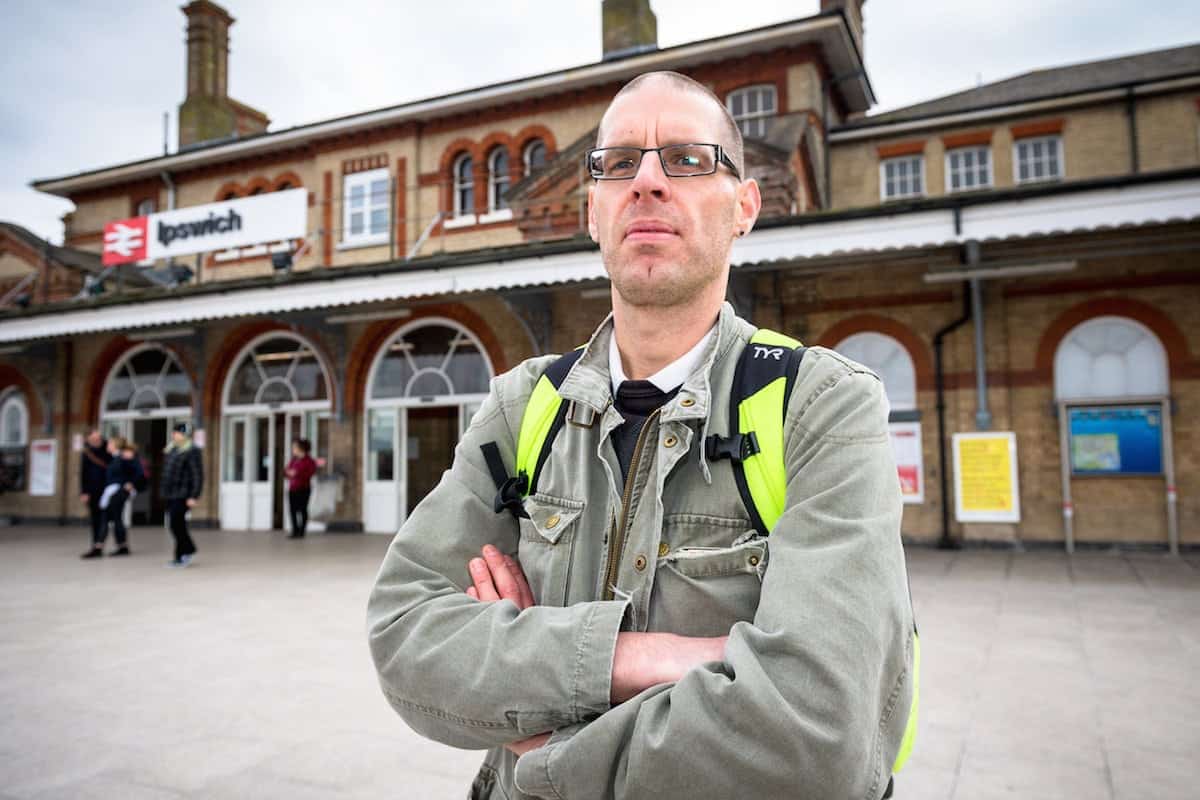 A commuter has sued a rail firm after regular delays left him repeatedly late for work.

Ecologist Seph Pochin, 45, took legal action against Greater Anglia after being held up 183 times in a year.

He has made the 32-mile journey around 550 times in the last year – travelling 32 miles from his home in Halesworth, Suffolk, to his office in Ipswich five days a week.

But Greater Anglia has failed to pay the £350 awarded to the passenger by a court – so bailiffs have been called in to take its property.

Seph said: “It takes round about an hour from Halesworth to Ipswich when its running on time, which is rarely.

“But you have to take a guess at what time you will get home or to work.

“It got to the point it was one journey back on a cold and rainy Friday evening where i was stuck for an hour in Woodbridge which is ten miles outside of Ipswich.

“At that point the penny dropped and I thought this isn’t getting any better something needs to be done. This can’t go on.”

Seph catches the 06:20am train every morning and has to leave work a few hours earlier than he is supposed to just because of delays.

He said: “I catch the three o’clock train. The train after is around about four.

“There is always only one coach for when there is a delayed train which is never enough.

“So I would rather not take the risk because three quarters of the time it will be disrupted.”

He claims that in the 12-months between February 2017 and February 2018, he was held up on one in three of all his journeys – a total of 28 hours over the year.

Seph said: “From then I started recording everyday I suffered.

“I took what time it departed, what direction it was coming from and where.

“I put it down in a spreadsheet and at the end of every month I sent it to Great Anglia customer care team.

“I said these are the delays I have suffered and I would like a refund on my season ticket but I didn’t get anywhere with that.

“They just kept fobbing me off and complaining about the network rail.

“They kept promising new trains arriving next year but it is next year and it hasn’t changed.

“And that has just wound me up even more.”

According his figures, 26 journeys were late by more than 15 minutes, with the one hundred minute delay on a journey last August.

The hold-ups were so bad he considered moving to avoid taking the train – but instead went to claim money online.

In September, Seph and the operator agreed to resolve the matter.

But the train company failed to provide dates to meet so Seph took the matter to court to apply for a judgement ruling.

Seph argued in court he was frequently being held up – including one 100-minute delay – by the “woeful” company, which had a responsibility to hit its advertised times.

He used the Consumer Rights Act 2016 to argue his case, leading Greater Anglia who initially defended the claim to agree to mediation.

In order for the mediation to be successful the Greater Anglia would have had to submit a questionnaire within a certain time but they failed to do so.

In December,Norwich County Court ruled in his favour and the train operator was ordered to pay him £350.

But when the train operator failed to pay-up by February, Seph paid £77 for a warrant to be served on Greater Anglia to seize assets.

The courts and tribunal service confirmed a warrant had been issued against GA, which will now have to pay the sum or face the bailiffs.

Seph added: “I didn’t expect it to get to this point where the baillifs about to take their assets of the money of what I have claimed.

“But this is good because it highlights the legislation.”

“I don’t suffer faults and I am stubborn as an old mule which is helpful because I think some people might have just given up, but i am not letting them go on this one.

“It is about time rail companies were named and shamed and highlighted.”

Greater Anglia has confirmed it was in a legal dispute with Mr Pochin but could not comment.

They have also admitted on average 23 per cent of delays are directly attributable to their service due to incidents such as train faults.

A Greater Anglia spokesperson said: “We are unable to comment about Seph Pochin’s legal case as legal proceedings are still ongoing.

“The Norwich to Great Yarmouth line and Ipswich to Lowestoft line – which Mr Pochin travels on – are being upgraded by Network Rail in a £68 million scheme to replace signals and points to make the train service more reliable.

“We are spending £1.4 billion on replacing every single train with brand new trains which will be longer, more reliable and have more seats.”

And around 8,200 UK of commuters claim they were not told of their rights to compensation the last time they were entitled to a payout.

But Greater Anglia rail isn’t the only company under the spotlight.

Hundreds of furious commuters have planned a group compensation claim against Southern Rail after the train disruption left them out of pocket with some customers losing their jobs or being forced to turn down work.

The Association of British Commuters (ABC) is representing more than a thousand passengers affect by the strikes.