It comes after a judge ordered it to be rebuilt 'brick by brick' following a campaign by locals. 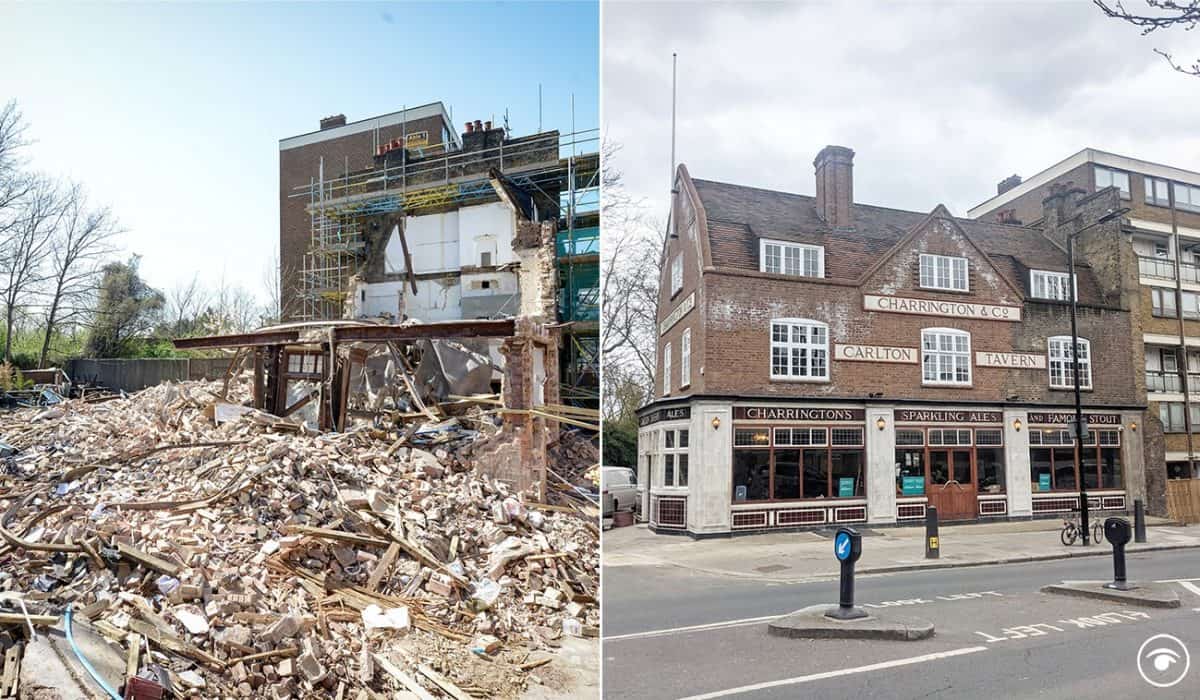 The Carlton Tavern was illegally demolished by a developer who wanted to turn it into flats but then ordered by a judge to be rebuilt ‘brick by brick’ following a campaign by locals, including actor and Strictly Come Dancing contestant Danny John-Jules.

The 100 year old pub in Maida Vale, west London, was being considered for Grade-II listed status when it was torn down in 2015 without planning permission.

Over its long history, the watering hole survived for many years and even withstood German bombs during the Blitz.

After the controversial demolition that did not have proper planning permission, Westminster Council got a court injunction to stop the developers turning it into 10 flats.

The brazen destruction of the community hub sparked a fierce backlash from punters, who demanded the 1920s building was returned.

Three months after it was reduced to rubble, the council served an enforcement order requiring the pub to be rebuilt back to its original state in the next 18 months.

But following years of failed appeals and attempts by Israeli firm CTLX to still build some flats above a restored pub, it will finally be reopened along with many others tomorrow.

The new pub owners have been working 16-hour days to get ready for its returning patrons, when beer gardens open across the country after the latest national lockdown.

New leaseholders Tom Rees and Ben Martin, who set up Homegrown Pubs while on furlough from the pandemic last year, are now working tirelessly to get the pub back to serving pints and roast dinners once more.

Mr Rees, 34, who lives around the corner from the pub, said: “We’ve already had a very compressed time scale.

“I think we thought we thought that it was all always going to be May and so we were kind of planning for May and then when it was announced we could do outside of April 12, we said yeah, let’s do it.

“Since it’s been announced, it’s gone absolutely crazy. We are fully booked for the next two weeks and our website isn’t even up yet.

“We’re going to have to sacrifice a few things like some furniture inside that we were hoping to have ready for the opening which will hopefully be completed when we can get customers indoors.

“Everyone’s trying to get open for the 12th so we’re competing for people’s time.”

There was a local outcry when bulldozers knocked down the wall of the 1920s west London pub, with dogged campaigns from loyal customers to rebuild it.

The demolition in April 2015 happened just two days before Historic England was due to recommend the pub be granted Grade-II listed status.

Following this outrage and the grassroots campaign, Westminster Council ordered the pub be rebuilt in “facsimile” to the original.

Mr Rees, who has worked in managing pubs for his whole career, said he moved to the area just when the pub was demolished.

He added: “A lot of campaigns lose steam somewhere but this one has just maintained a massive amount of energy and so slowly over the years as I’ve seen it rumble on and build momentum.

“I still thought even when it was being rebuilt, I thought it was not going to be a pub. I thought it would be the shell of a pub that would certainly be used as an estate agents or something.

“It’s definitely a warning shot to developers that will make them think twice, but honestly, I don’t know if this would have happened in any other council with any other makeup of people championing the cause and it’s hard to know whether this has set a precedent that’ll be followed later or whether it’s just a unique one-off.

“There’s still pubs up and down the country that are going through the same thing. There are people getting in touch with us asking if we can help them out.

“I think the majority of them won’t succeed in getting their pubs brought back.

“I think there was a confluence of things that came together at the right time, the right place, the right people and that took some really strong-willed local campaigners, some great coverage from the press to raise the agenda and then the political will to do it at the local council.

“I don’t think every council’s got the same level of commitment. We hope that this is a precedent-setting pub. There’s some beautiful historic pubs that fall into disrepair.”

Over the course of three nationwide lockdowns and various coronavirus restrictions, Britain lost around 6,000 bars and pubs in 2020 – nearly three times than in 2019.

New pubs are rarely built any more, so for the two new leaseholders, it’s a unique opportunity.

The cellar is restored and restocked with local London brewers including the Camden Town Brewery, Five Points from Hackney, the London Brewing Co, and Anspach & Hobday.

Parts of the new bar, fireplace and bannister have been reclaimed from the rubble of the pub, which gives it “character and charm”.

Mr Rees added: “It’s a really good commercial opportunity. We love this romantic idea of bringing this pub back. There are not that many great local pubs here that you want to sit and have a really great Sunday roast.

“We were aware that this pub wasn’t serving the whole community before, serving quite a small niche, and so we want to broaden it out.

“Part of what appealed to us was that we’re getting this beautiful heritage building with brand new insides. We’re also getting the opportunity to completely refit.

“The hockey club used to change in the kitchen space as it was a shower cube and changing room so we’ve completely revamped that and the basement.

“It’s a sort of blessing and a curse really with this project. I would never want to do another project like this because what we’ve got was a shell.

“In the long term, it’s going to be brilliant. In the short term, it’s been mad trying to get all the work done.

“We wouldn’t be anywhere without some favours. We keep throwing steak dinners around so it might be a month before we make any money.

“But I think people are really engaged with the idea of bringing this pub back and everyone feels a part of it and it’s not just a faceless corporation.”

The saga began when developers and owners of the pub, CTLX, bulldozed the historic building after an application for planning permission in January 2015 to replace it with a bar and block of 10 flats was rejected.

Following the demolition, Westminster City Council made an unprecedented legal decision to hand the Israel-based developers an enforcement notice ordering to rebuild it.

CTLX refused and appealed the decision – but a planning inspector found in favour of the council, following a public inquiry in May 2016 and ruled it was to be rebuilt.

The pub was left surrounded by a tall wooden fence – which was at one point daubed with “no right to do this – people before profit”.

A pub had been on the same site since the 1860s until it was destroyed by a German Zeppelin bomb in May 1918, and the Carlton Tavern was built in its place in 1920.

Two decades later, it was the only building left standing on Carlton Vale after a Nazi bombing raid during the Second World War.