"The science is clear, yet the addiction to fossil fuels by greedy corporations and rich countries is resulting in losses and damages for communities who have done the least to cause the current climate crisis.” 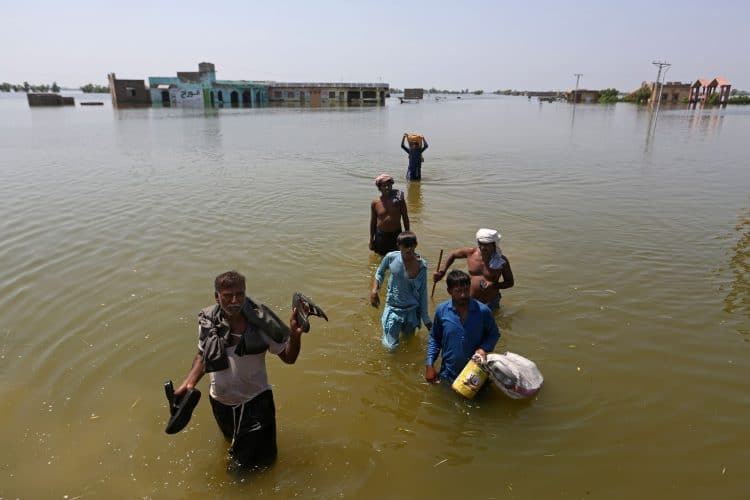 Climate impacts are heading into “uncharted territories of destruction”, the head of the UN has warned, as a multi-agency report sets out the scale of the crisis.

The United In Science report, co-ordinated by the UN’s World Meteorological Organisation (WMO), warns that “without ambitious action, the physical and socioeconomic impacts of climate change will be devastating”.

The report comes as Pakistan suffers from catastrophic flooding, and in the aftermath of searing heat and drought in parts of the world including Europe and the UK, which saw temperatures climb above 40C for the first time on record.

The report warns there is a huge gap between the pledges countries have made under the international Paris Agreement to curb global warming to 1.5C above pre-industrial levels to avoid the worst impacts of climate change and the action they are taking to deliver it.

UN secretary general Antonio Guterres said the report showed the world was “way off track”, with climate action stalling, a failure to help the vulnerable adapt to a changing world and losses from climate disasters of 200 million dollars (£170m) a day.

“Floods, droughts, heatwaves, extreme storms and wildfires are going from bad to worse, breaking records with ever alarming frequency,” he warned.

He pointed to the heatwaves in Europe, floods in Pakistan, and prolonged and severe droughts in China, parts of Africa and the US, and said: “There is nothing natural about the new scale of these disasters.

“They are the price of humanity’s fossil fuel addiction.

“This year’s United In Science report shows climate impacts heading into uncharted territories of destruction, yet each year we double-down on this fossil fuel addiction, even as the symptoms get rapidly worse,” he said.

“The current fossil fuel free-for-all must end now. It is a recipe for permanent climate chaos and suffering.”

The United In Science report shows:

1. Levels of climate-warming greenhouse gases in the atmosphere continue to rise.

2. Global emissions of carbon dioxide were higher in early 2022 than pre-pandemic levels, after a large but temporary drop in pollution due to lockdowns around the world.

3. Greenhouse gases are driving rising temperatures, with the last seven years the warmest on record.

4. There is a 48% chance annual average global temperatures will be 1.5C higher than in pre-industrial times in the next five years – temporarily exceeding the more stringent of two thresholds for curbing temperatures under the Paris Agreement.

6. Pledges by countries to curb greenhouse gas emissions made last year will not keep global warming to the 1.5C limit; the ambition of those pledges needs to be seven times higher to limit warming to 1.5C and four times higher to meet the less stringent target of 2C of warming.

7. Irreversible changes to climate systems, known as “tipping points”, such as melting of the polar ice sheets or heat and humidity levels beyond which outdoor human labour is not possible, cannot be ruled out and could have significant consequences on a regional or even global scale.

8. Cities, which are responsible for up to 70% of emissions from human activities, will face increasing impacts of climate change including heatwaves, downpours and coastal flooding, which will combine with the impacts of inequality.

9. Billions of people around the world are highly vulnerable to the impacts of climate change, and action to adapt to climate impacts and reduce the risks of disasters are desperately needed.

10. Climate change made extreme heat and floods worse in 2022 but early warning systems can reduce risks, losses and deaths – although much of the world’s population does not have access to such schemes.

WMO secretary general Prof Petteri Taalas said: “Climate science is increasingly able to show that many of the extreme weather events that we are experiencing have become more likely and more intense due to human-induced climate change.

“We have seen this repeatedly this year, with tragic effect.

“It is more important than ever that we scale up action on early warning systems to build resilience to current and future climate risks in vulnerable communities.”

The UN, led by the WMO, is working to make early warning systems available to everyone on Earth within five years.

Responding to the report, Tasneem Essop, executive director of the global Climate Action Network of environmental and social organisations and aid agencies, said: “The terrifying picture painted by the United In Science report is already a lived reality for millions of people facing recurring climate disasters.

“The science is clear, yet the addiction to fossil fuels by greedy corporations and rich countries is resulting in losses and damages for communities who have done the least to cause the current climate crisis.”

She called for an end to the dependence on fossil fuels through a transition to clean economies that is fair and equitable, and for the forthcoming Cop27 UN climate summit in Egypt to agree new funding for those already hit by the crisis.